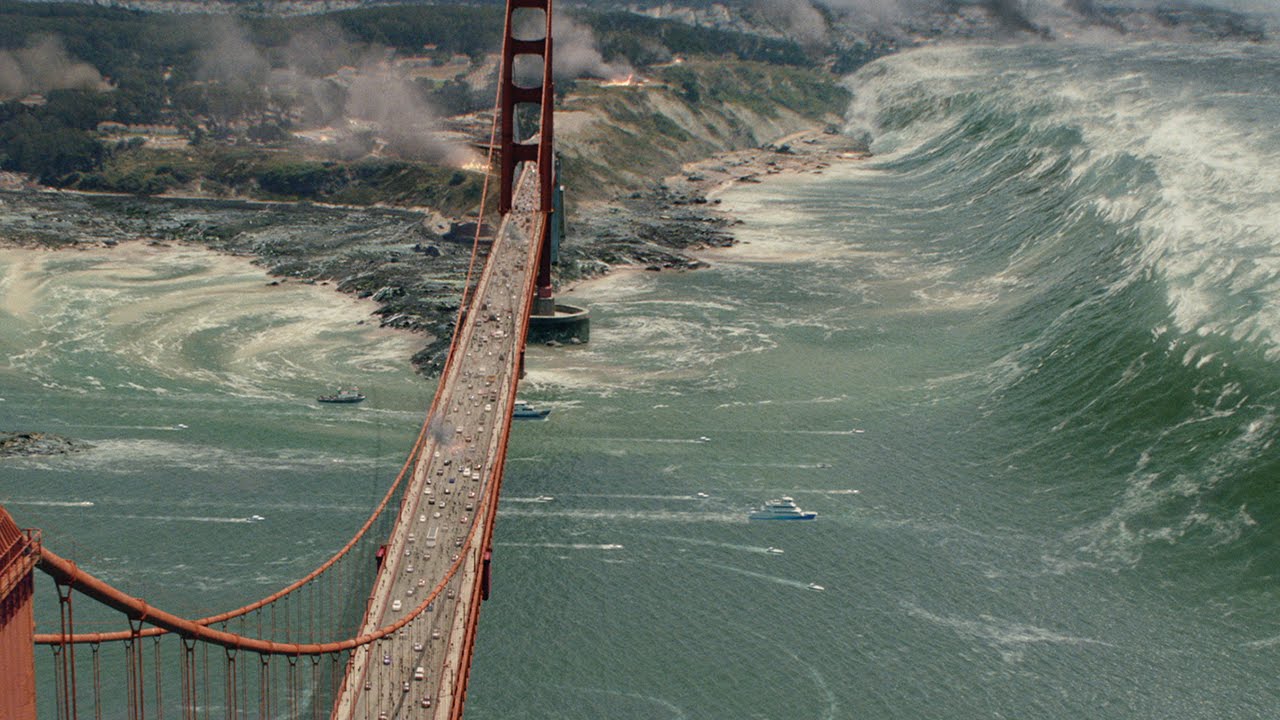 After watching the oddly-titled San Andreas, I can only surmise that this movie should have been renamed The Rock Versus Earthquakes.

This review contains spoilers but who cares.

San Andreas follows Ray: a helicopter rescue pilot for the Los Angeles Fire Department, played by Dwayne “The Rock” Johnson. After a series of earthquakes in Southern California, Ray meets up with his wife, Emma (Carla Gugino) and they travel north to San Francisco to rescue their daughter, Blake (Alexandra Daddario).

San Andreas follows the standard disaster movie format. The story centres around a family split up around the disaster area and cuts back and forth between them trying to find each other and the team of scientists who are able to predict these natural events.

Former Lost showrunner turned San Andreas screenwriter, Carlton Cuse, attempts to subvert genre tropes here and there to keep it interesting. It’s a largely vain attempt to be clever inside a genre that has been done to death in Hollywood, but it’s not entirely unwelcome.

Most of these attempts are fairly unremarkable, but one thing I will say is that women are fairly well represented in San Andreas. It would have been pretty easy to follow standard action movie formulae and had all the Hollywood Tough Guys save the damsels from the end of the world, but that’s not the case in this film. It’s no Mad Max: Fury Road, but there are some bad-ass ladies in San Andreas.

Alexandra Daddario’s daughter character (Blake) starts out as a helpless damsel, but quickly establishes herself as the hero in her corner of the film, saving the two guys she’s with from countless perils. Carla Gugino’s wife character (Emma) tells her new boyfriend to go and fuck himself after he abandons Blake, and she essentially saves herself from a collapsing building like a total badass.

Despite the fact that the story is glaringly unoriginal, it’s still worth going to see for the same reason that I keep watching movies like 2012, The Day After Tomorrow and Into The Storm: the special effects are awesome.

The effects team literally tore California’s major landmarks apart for San Andreas. An earthquake levels Los Angeles, a plate shift sees the Californian countryside torn asunder, and San Francisco is not only levelled by quakes but also decimated by a massive tsunami. Like, decimated.

I think the reason that I like San Andreas more than films like 2012 and The Day After Tomorrow is because it at least pretends to have a grounding in science. Sure, it’s still extreme science, but it’s science nevertheless. Quakes are on the front page of almost every news website in the world recently given the devastating events happening in Nepal, Chile and New Zealand, and Californians constantly live under the cloud of the next “Big One” literally shaking their world apart.

Earthquakes are also scarier than random walls of water or stupid Mayan nonsense, because there’s nowhere to run. You can’t go inside to hide from a quake, and you’re no safer outside. And because the film’s science team sets up the fact that the ferocious quakes can strike at any moment, you’re almost guaranteed a quake every five minutes to drive the plot forward.

San Andreas is in theatres now.