More Than 12 Million Trees Have Been Killed In California's Drought

If you happen to be flying anywhere in the western third of the US this year, you'll see a lot of brown: dark umber bare mountain peaks, dusty khaki dry river beds, golden beige straw-like grass. Add one more shade to the mix: The reddish specks of trees killed by four years of crippling drought.

According to the US Forest Service, about 12.5 million trees are dead across the state due to lack of water, a number that will certainly increase this year. "It is almost certain that millions more trees will die over the course of the upcoming summer as the drought situation continues and becomes ever more long-term," US Forest Service biologist Jeffrey Moore told the LA Times.

Last month, Moore and two other surveyors flew in a light fixed-wing aircraft over several California forests, capturing imagery as low as 300m above ground level. Using a digital aerial sketch-mapping system, the scientists were able to make fairly accurate assessments about the numbers of dead or damaged trees by looking for certain colours and shapes in the images. They then were able to extrapolate that data based on their knowledge of forest habitats and the severity of drought in each region to make an estimate for the entire state. 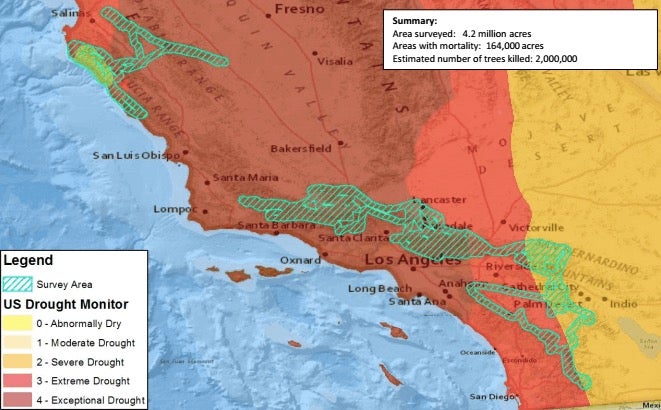 While some trees have died due to lack of water, there's another, more serious threat to our forests. Even if a tree doesn't straight up die from dehydration, its immune system is weakened and it's not able to produce a sticky resin that protects against predators. And that's when the bark beetles chew the trees to death. Dozens of these species of beetles have already been proliferating throughout many states — North America is currently experiencing an "eruption" of bark beetles that's likely the largest insect invasion on record.

The problem with all of this is the increasing danger of fire. As I mentioned a few days ago, the risk for potential wildfires in these areas is projected to be higher than ever this summer. Fire is a natural part of forest regeneration, but extreme fire suppression over the last century means there is far too much dead timber on the ground. And a hotter, drier fire season means it's all much more susceptible to a careless camper's match.