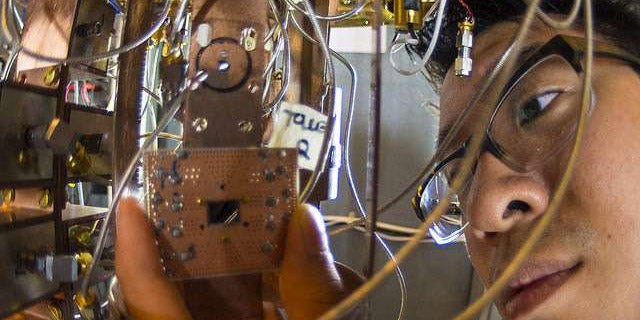 Quantum computing could make complex calculations trivial — but it's currently fraught with problems. Now, though, IBM has solved one of the biggest, allowing it to detect the internal errors that could otherwise render quantum calculation useless.

One of the many problems exhibited by the breed of future computers is that they exist in the delicate and fuzzy quantum world, using not bits but qubits — quantum bits. Each of these qubits can represent a 0, a 1, or — crucially — both, providing the ability to dramatically bump up computation speeds. When both exist at the same time on the quibit, they are related by what physicists call a phase relationship.

But in real quantum computers, errors can occur when a qubit holds both states: they can flip to being just a regular 0 or 1 (known as a bit flip), or the phase relationship can change sign (known as a phase flip). While there are already techniques in existence that can detect both errors, so far it's been impossible to detect them both at the same time. That's not much use, because you needed to be able to detect all errors for a quantum computer to work reliably. But researchers at IBM have cracked the problem. PhysOrg explains how:

The IBM Research team used a variety of techniques to measure the states of two independent syndrome (measurement) qubits. Each reveals one aspect of the quantum information stored on two other qubits (called code, or data qubits). Specifically, one syndrome qubit revealed whether a bit-flip error occurred to either of the code qubits, while the other syndrome qubit revealed whether a phase-flip error occurred. Determining the joint quantum information in the code qubits is an essential step for quantum error correction because directly measuring the code qubits destroys the information contained within them.

It's a seemingly simple solution to what's been a huge problem in the quantum community. IBM reckons it should be enough to introduce this kind error detection in the larger arrays of qubits that researchers hope to create in the future. We sure hope so. [Nature Communications via PhysOrg]