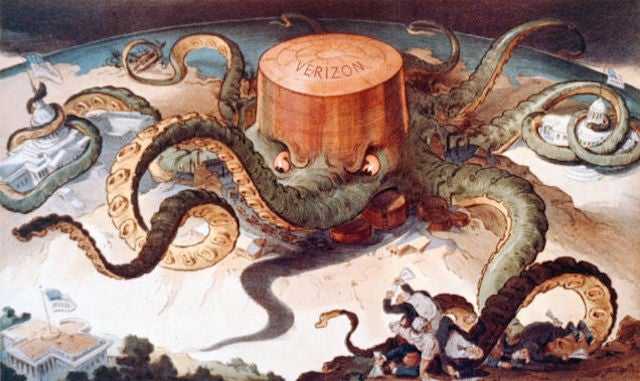 US telecommunication companies were up in arms in February after the Federal Communications Commission (FCC) made net neutrality the law of the land by classifying broadband internet as a utility, seeming to ensure there would be no pay-to-play fast lanes.

Not so fast. As Verizon's planned acquisition of AOL reminds us, there's another way to cash in on giving certain content preferential treatment: buy it.

The wireless carrier's US$4.4 billion purchase allows it to use the content to attract more users, and potentially push people toward that content by giving it preferential treatment — for example, not having that count against the allotted data cap. It also gives the company the market power to drive harder bargains with other content providers.

While this is certainly legal, it subverts the reason we need net neutrality in the first place: to drive innovation on the content side, you need to have nonpreferential access to the pipes delivering it, so content providers anywhere can reach consumers equally.

Research we've been conducting for the past six years on the topic shows that the only way to prevent this subversion is "strong" net neutrality and its enforcement. The economics of the industry indicate that these companies will always have an incentive to create fast and slow lanes, charging tolls for the former.

Other than situations of clear public interest or safety, there should not be any reason for prioritising some online content over others. There also needs to be careful scrutiny of mergers like this one to ensure that internet providers aren't finding a back door to prioritising certain content.

What we also learned, surprisingly, is that the big content companies — while ostensibly in favour of net neutrality — actually have an incentive to oppose it as well. If Google can pay extra to get its YouTube video content to consumers faster, it would have the economic incentive to do so, thereby marginalizing smaller players that can't afford to pay the fees.

The origin of high-speed toll lanes

Anticipating this surge of online traffic, several internet service providers (ISPs) such as AT&T and Verizon came up with the idea that they should be able to charge content providers like Netflix for prioritisation. This new source of revenue would then be used to invest in improving infrastructure, such as upgrading to fibre.

It is the controversy behind this idea that finally morphed into the net neutrality debate that we know today.

The debate has been fierce, and, unlike many other arcane policy issues, it has spilled over into the public arena. Surprisingly, however, there has been a relative lack of rigorous economic analysis on the topic — specifically, who are the winners and losers if we abandon net neutrality.

To address this, we developed a model that relies on game theory — the study of strategic decision-making using mathematical models — in 2011. It considers a monopolist ISP within a certain geographic area that has to decide whether or not to offer paid prioritisation to competing content providers.

As might be expected, our analysis indicated that ISPs had an economic incentive to "deviate" from net neutrality. More worrisome, if a content provider generated significantly higher amounts of revenue from its subscribers than its competitors, then the ISP might find it useful to charge a prioritisation fee that is so high that only the dominating content providers can afford to pay.

This could end up marginalizing smaller content providers to the extent that they might be completely wiped out of the market. The dominant content provider might then end up with a larger market share, but the ISP could still charge the high fees to extract that extra "rent" because of its monopoly power.

Furthermore, our analysis indicates that the ISPs would have even less incentive to expand and improve their infrastructure — the primary reason they offer to implement paid prioritisation in the first place.

Impact on the internet economy

These results might have implications for the internet economy as we know it. At present, its growth is fuelled by the easy proliferation of new types of ideas and content, which is a direct result of the ease of entry into any online market. There is also a sense of fair play — anyone with an innovative idea has a shot at glory.

But without net neutrality, ISPs can effectively act as gatekeepers of content, and, if fledgling startups cannot afford to pay the packet prioritisation fees, they will not be able to effectively challenge the incumbents. Researchers at Google and Microsoft have found that consumers are prone to leave a website if it takes just a few hundred milliseconds more than a rival website, and with packet prioritisation, companies without deep pockets can expect such a future.

Many proponents of net neutrality have proposed that the culprit here is the lack of competition at the local ISP level. The FCC now defines broadband access as allowing download speeds of least 25 megabits per second. By that definition, three-quarters of US households have at most one broadband service provider, and only one-quarter has access to two or more.

So is competition the answer?

Our latest research models this scenario and finds that ISPs will still want to abolish net neutrality.

From proponents to opponents

More interestingly, upending the commonly held belief that content companies will always support net neutrality, we find that under certain conditions it becomes economically beneficial for the dominant provider to reverse its stance on net neutrality. Indeed, even after paying the ISP's prioritisation fees, it makes more money than what it would under net neutrality.

In effect, the dominant content provider can use competition among ISPs to its advantage and marginalize its own rivals. Therefore, perhaps not coincidentally, there have been reports that large internet companies "have not joined online protests, or otherwise moved to mobilize their users in favour of new rules."

Content providers appear to support the principles of net neutrality only if it suits them. Netflix, for example, is a big and vocal supporter, yet it may be actually benefiting from differential treatment in Australia.

Who loses out most in the absence of net neutrality? The smaller internet firms, which would not be able to afford the prioritisation fees.

The computing and telecommunications revolution is just getting started, and the future promises to be far more wondrous than we could ever imagine. From the viewpoint of the long-term viability and vibrancy of the internet economy, our research suggests that allowing preferential treatment of content of any kind would have profound negative effects.

The FCC has passed net neutrality rules, but challenges remain, and they could yet be overturned — whether by a court, or by a future FCC which could be dominated by opponents of the policy.

Verizon's takeover of AOL is a reminder that these rules alone aren't enough. They must be vigorously enforced to ensure no content — even a company's own offerings — is afforded special privileges.

The oft-promoted argument that prioritisation is needed because newer types of content will overwhelm the internet infrastructure seems overblown. In many countries around the world, people enjoy much faster internet speeds at prices much lower than in the US. The enforcement of net neutrality does not seem to hamper broadband access or innovation.

One of the main reasons behind the explosion of innovation and competition on the internet is that newcomers have always had a level playing field: every packet is treated like any other.

Preferential treatment of online traffic based on commercial considerations tilts that field to the advantage of the players with deeper pockets and thus deters innovation. Rather than killing innovation, net neutrality preserves it.

This post first appeared on The Conversation. It's been republished under a Creative Commons licence.