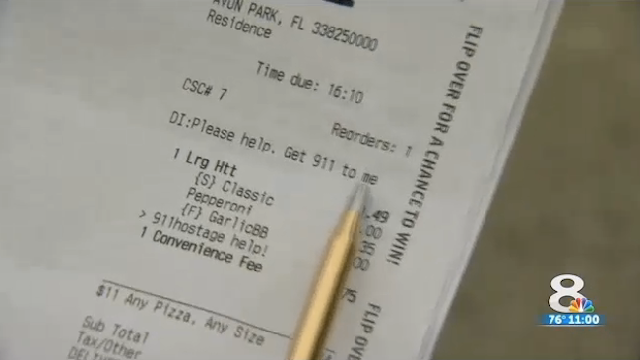 A woman in Florida escaped from being held hostage on Monday thanks to Pizza Hut's smartphone app, and employees who recognised her order.

Ethan Nickerson and his girlfriend had been arguing throughout the day when he started to threaten her with a large knife. Nickerson then took her phone, but later gave it back to her so that she could order a pizza. She slipped a message into the comments section reading, "911hostage help!" and "Please help. Get 911 to me." Nickerson immediately took the phone back after the order.

"We've never seen that before," the Pizza Hut's manager told WFLA. "I've been here 28 years and never, never seen nothing like that come through."

Thankfully, the woman was a frequent customer and the employees recognised that it probably wasn't a hoax. They immediately called the police, who arrived to find the woman and one of her children answering the door. The two other children in the home were released by Nickerson after 20 minutes of talking with police through a closed door.

All of the victims are reportedly safe, and Nickerson has been charged with intent to kill, battery, false imprisonment and obstructing justice. The police told WFLA that he may have been high on meth at the time.

So why did she use the app rather than text? Even if texting had been an option (and it sounds like it wasn't with Nickerson monitoring her use of the phone) texting emergency services is still in its infancy in the United States. Despite the planned roll-out of text-to-911 by the major phone carriers last year, the service is still rather limited. [Press Release via WFLA via Ars Technica]