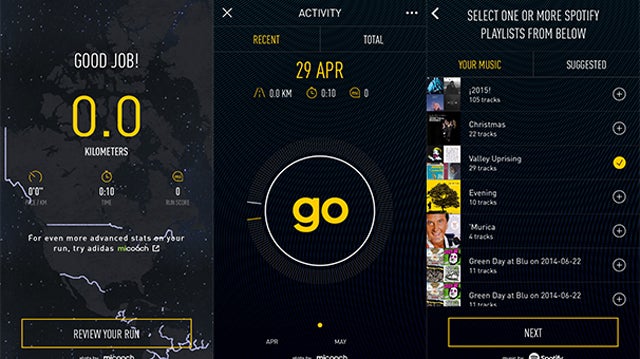 Listening to music whilst running is great — if only to drown out the little voice in your head, swearing about how unfit you are, you useless lump — but matching the BPM of the song to your running cadence is nearly impossible.

There are apps that will build you specific playlists, but that's an unreasonable amount of extra effort to put towards an activity that's already pretty soul-sucking in the first place. Adidas and Spotify have just partnered to release something that might solve the problem though.

The Adidas Go app is a running app that's plugged into your Spotify account, using a mixture of your existing playlists and a recommendation engine to find a song that matches your current running speed — without you having to think about it. I just took it for a run around the park, and once given a few minutes to bed down, the songs that came on were dead-on for my pace, enough so that I almost wanted to keep running.

Apart from the headline Spotify integration, the app can also pull songs from your local library to sync up to your workout. If paired with the existing micoach app, Go also serves as a basic fitness tracker, complete with workout stats, activity logs, and a way to gloat about your physical prowess on Facebook. [iTunes]