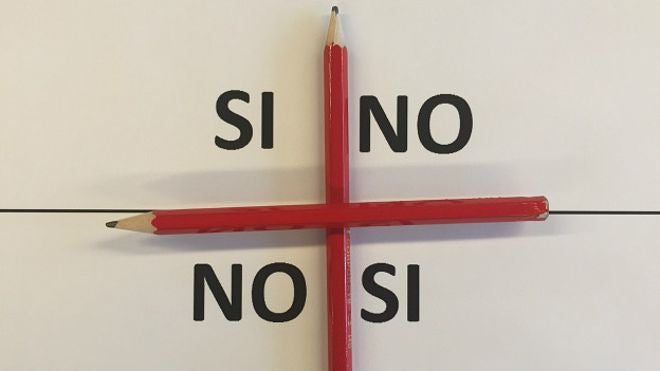 Teens have settled upon a New Dank Meme, and it's an alliterative, culturally inaccurate demon-summoning ritual. Over two million people used the hashtag #CharlieCharlieChallenge on Twitter in the past two days.

Want to feel young, fresh, & occult-friendly? Wish the Cinnamon challenge gave you insight into the realms of the undead? Do the following:

This isn't a new game as much as it's a Vine-ready pastiche of kitsch occultism. The idea of summoning an otherworldly spirit through group incantation has been a thing people have done to freak themselves out for years, chanting "Bloody Mary" in front of a mirror or chanting "Beetlejuice" after thinking too much about the volatile career of Michael Keaton.

The pencils-on-a-grid-moving-to-signify-supernatural-presence has the familiar pull of pareidolia — when your mind tricks you into reading meaning into random or meaningless stimuli. It's the same thing that happens when you play with a Ouija board, and it has the same nonsense exoticism as Ouija (which was invented by an American businessman, despite the foreign-sounding name).

The BBC looked into where the whole "Mexican" element got thrown in, and concluded that it isn't based on any known folklore from south of the border.

"There's no demon called 'Charlie' in Mexico," says Maria Elena Navez of BBC Mundo. "Mexican legends often come from ancient Aztec and Maya history, or from the many beliefs that began circulating during the Spanish conquest. In Mexican mythology you can find gods with names like 'Tlaltecuhtli' or 'Tezcatlipoca' in the Nahuatl language. But if this legend began after the Spanish conquest, I'm sure it would have been called 'Carlitos' (Charlie in Spanish)."

KnowYourMeme traced the "Charlie Charlie" invocation back to a 2014 YouTube video called "Jugando Charly Charlie," posted by a Spanish speaker, although this variation of the pencil game there is different than the one people are currently losing their shit over.

But it's been around for longer than that. In 2008, a user called twilightfan posted a story about playing the pencil game to contact "a ghost named Charlie that had died of child abuse" on YourGhostStories.com. On digital sadness aggregator Yahoo! Answers, people have been asking about the Charlie demon pencil game since 2010.

It's not clear when Charlie morphed into a specifically Mexican demon, but once the paranormal fad went viral, it didn't take long for Christian fearmongers to warn against calling on the nefarious spirit world via DIY Ouija.

As far as rapid-fire teen memes go, this is a step up from the #KylieJennerLipChallenge since it doesn't involve moderate-to-severe mouth bruising. And since no one has been inspired to attempt murder-via-stabbing by Charlie Charlie (yet) this is also an improvement over Slender Man.