Watch A Week Of Rain And Snow Across The World 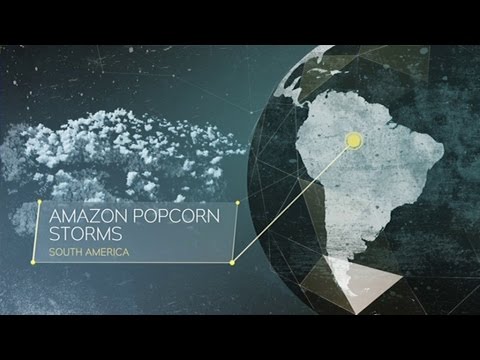 The Global Precipitation Measurement Core Observatory has been up and running for a little over a year now, and the joint NASA-Japan mission is starting to yield some (totally awesome) results.

The GPM is a mission that brings together the data from 12 weather satellites orbiting the Earth, and combines it into one global picture of rain and snow. It’s the first time humans have ever had a complete picture of where rain is falling, and when. The mission generates a new global map every 30 minutes, with a resolution of about 10km by 10km — clear enough to see if rain is falling in Manhattan, but not Queens.

To commerate a year of operations, NASA released the video above, which shows a week of rainfall, from August 4 to August 14 last year. It’s eye-opening to watch as a bystander — you can see everything, from the small but ferocious rainstorms at the equator, to the long-lasting storms down in Antarctica.

But for climate scientists, it has far greater implications. Being able to study precipitation on a worldwide basis, with consistency day after day will help with our understanding of climate change. And, with rainfall (or lack thereof) becoming a problem by the year, the GPM is bound to get more important. But for now, just sit back, watch and appreciate how dry it is outside. [NASA]