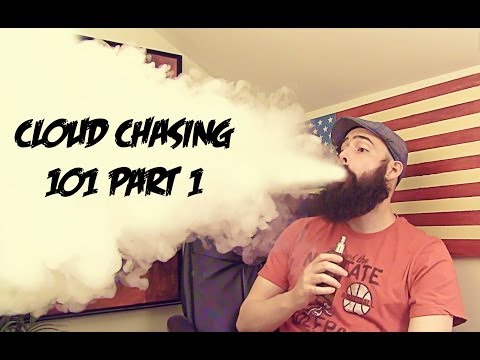 With vaping’s great popularity comes a growing competitive offshoot, complete with contests, judges, sponsors and spectators turning out to see who can produce the most impressive plooms.

The Wall Street Journal has an interesting piece on competitive vaping, which it calls an “extreme sport.” The sport is dubbed “cloud chasing.” Those who compete in cloud chasing utilise their e-cigs and lungs to produce truly mind-boggling vapour puffs. The fans who like to watch are called “cloud gazers.” As the Journal explains:

Competitions are straightforward. Cloud chasers inhale on the devices, which convert e-cigarette “juice” into vapour. They then toast the competition by blowing the biggest, densest vapour cloud possible. In less than two years, the sport has adopted all the trappings of professional athletics. It not only has fans but teams, sponsors and cash prizes.

Not everyone is down for vape fun and games. The article quotes a secretary for the National Vapers Club, who worries that the clouds “can be offensive” and may give the already-tenuous reputation of vapourising an even worse name. As more and more people — including kids — turn to vapourising instead of smoking, states are moving to regulate the products and where you can use them a lot more. The last place I worked, we had the issue raised at a company-wide meeting, because some were bothered by others’ incessant cloud-making. Vapers were then restricted to the outdoors.

As Gizmodo’s vapouriser correspondent, you won’t find me lecturing about the possible hazards of vapes, though a lot of scientific juries are still out on the long-term effects. But as a smoker I can confirm first-hand that inhaling on a vape isn’t exactly gentle on the lungs. I can’t imagine that the insanely long, concerted pulls “cloud chasers” are drawing in can be great for them.

This is especially relevant due the fact that a lot of now-fanatic vape enthusiasts took them up in order to quit smoking regular cigarettes:

Chasers blow off critics. Mr. Maynard said he was a nearly two pack-a-day smoker until he began competing. Then his hands became so busy modifying his device that they stopped reaching for Marlboro Lights. He called the group at Metro Vapors a “brotherhood” of cigarette quitters.

I do applaud anyone who has managed to successfully shake themselves from the demon grip of Big Tobacco. But I would caution us from taking it too far in the opposite direction, and calling “extreme sport” vapourising competitions an “antismoking rally.”

As someone who has spent many hours perfecting a perfect smoke ring to blow across the room, however, I have to admit I can see the appeal of both cloud chasing and gazing as an activity.