This Taut, Cruel Horror Flick Is Shot Through A Teen’s Laptop Screen 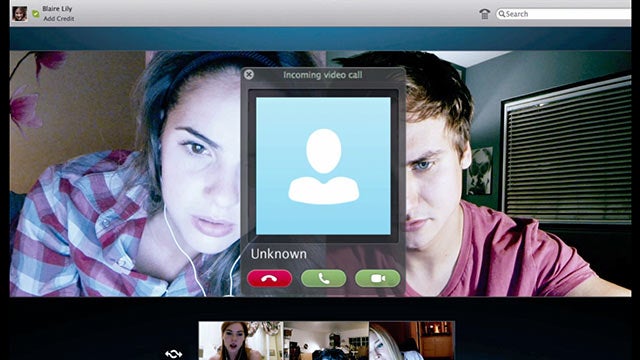 There are certain films that are so obviously meant to be projected on a big screen it feels wrong to watch them for the first time at home — grandiose, SFX-heavy space sagas like Gravity only feel right splayed across an IMAX canvass. Unfriended, in its scale, has the reverse affect. It’s best watched on a laptop, huddled in bed, alone.


Unfriended, the crude cousin of The Blair Witch Project and Paranormal Activity, uses the same concept of a horror on a microbudget, with a radically circumscribed vantage point. Instead of a documentary in the woods or a webcams in the house, Unfriended unfolds on the internet, all on one shot of a teenager’s laptop screen.

The opening is effectively unsettling: LiveLeak footage, blurred and shaky, of a girl named Laura Barns shooting herself in the face. Another click and we’re watching the video that made her kill herself, one humiliating drunk night uploaded for everyone to see. The YouTube comments are scathing: Kill Urself. You know the story, or some variation.

A Skype call comes through, and we learn the screen belongs to a girl named Blair (Shelley Hennig). She and her boyfriend Mitch are quickly joined on a group call with four others from their circle of friends, but there’s one mysterious member of the virtual party without an avatar.

The teen troupe immediately starts freaking out about the “creeper” who won’t get off their call. Some of them receive Facebook message from Laura’s account. Oh, and it’s the anniversary of Laura’s suicide. Is it a troll, or something even more sinister? Well, spoilers, but duh: It’s something more sinister. A GHOST TROLL!

It’s a little like a reverse Carrie, where we experience revenge for teen brutality through the eyes of the tormenters. The movie moves at a fairly rapid clip, and even though secrets are spilled and lies are untangled, I never gave a shit about the characters, probably partly because I knew at least most of them were headed towards a violent end, but also because there just wasn’t a lot there. They were archetypes: The hot rich guy, the ditz, the fat nerd, and mean archetypes at that.

Unfriended is stylistically similar to 2013’s short film Noah, a 17-minute romantic comedy from young Canadian filmmakers, though they couldn’t be more different in tone. Like Unfriended, Noah takes place entirely on a teenager’s screen, achieving quick intimacy by carefully mimicking the familiar clicking habits of the young. Both films show you glimpses of a character’s inner thoughts by showing them typing how they really feel, and then deleting it and typing a less honest response.

The attention to detail on how teenagers used the internet in 2013 is impressive. The movie weaves iMessage, Facebook, BitTorrent, YouTube, Chatroulette, and Spotify use in with its central group Skype call.

The only unrealistic thing about the way the teens interacted (besides, you know, the whole ghost thing) was that all of them appeared to be completely alone in their homes. (I wrote Where are parents????? on three separate occasions while taking notes in the theatre.)

Unfriended is a taut, charming trash flick that is an unabashedly garish exploitation of cyberbullying. The dead Laura Ghost Troll harasses the gang with increasingly violent tactics, and I won’t tell you what happens, but I will say I’d give it a 3/5 on the scary scale — most of it was fairly predictable, if you’ve ever heard of the basic plot of Agatha Christie’s “And Then There Were None,” but it is clever in the ways it incorporates the annoyances of using the internet — buffering, frozen video calls, and pop-up ads — into its scare tactics. Unfriendedmostly succeeds in what it sets out to be: A fresh, nasty addition to the microbudget horror genre.