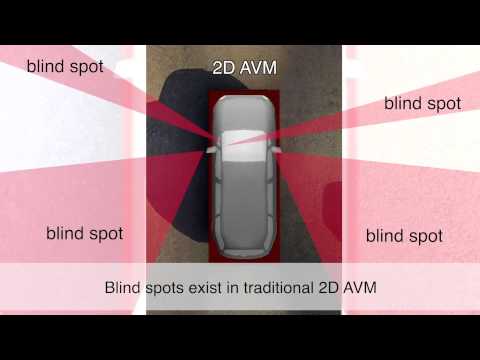 There are already countless vehicles that use multiple tiny cameras to give the driver an overhead view of what objects or obstacles are around their car while parking. But SPTek has developed a system that’s able to show a driver what’s around their vehicle while on the road, completely eliminating the blindspot that’s responsible for so many accidents.

The 3D-AVMS system uses four 190-degree wide-angle lens cameras hidden on the sides, front and back of a vehicle. Those cameras feed 100 megapixels worth of digital imagery to an on-board computer that generates a real-time omnidirectional view around a 3D representation of the car. So drivers are not only not limited to just an overhead view of what’s around their vehicle, they can see what’s going on in all directions and from almost any angle.

The 3D-AVMS system has already been installed on a tour bus, notoriously difficult to navigate in crowded downtown areas of a city. But SPTek plans to fully commercialise the technology beginning in August of this year which means it just might show up as an option when it’s time to get a new car in a couple of years. [SPTek via Nikkei Technology]