ICYMI: Learning Klingon Is About To Become Way Easier 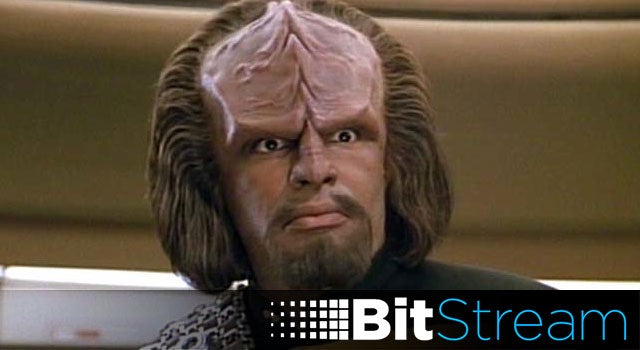 Apple Watch hits shipping delays (naturally) and so does the OnePlus Two. But at least we have Klingon on Duolingo to look forward to. This is Bitstream, all the bits of news and rumours you missed yesterday.

The app Duolingo is a modern-day Rosetta stone. Its gameification of language-learning is much, much more helpful than stuffy classrooms and exams, but for the last few years, the app has been somewhat stingy with what languages are offered: English, Spanish, Portuguese, Italian, German. That's it. In 2013, the app launched an incubator program to entice teachers fluent in other languages like Chinese, Japanese, maybe even... Elvish?! to develop lessons for the platform. Yesterday, Duolingo officially announced its call for teachers to bring Klingon, the fictional Star Trek language of the show's most fearsome race, to its pool of languages. All I can say is ghe''or HIja'. [Translation: Hell Yes] [TNW]

Mini is developing AR glasses for its cars, and they look really cool and stylish. JK, they look dumb. [Mini]

Movie theatres are adding another dimension (sort of). "4D" theatres are pelting viewers with rain and snow effects. Um... why? [Variety]

IBM is testing AI software that works like the human brain. I don't see how any of this is a bad idea at all. Nope. [Technology Review]

The Apple Watch is here! (sort of). Bunches and bunches of people are reporting shipping delays until June, and for some, even August. [Business Insider]

8Tracks is a music service for indie music lovers that now allows access to 6.5 million songs, with two-thirds being from independent artists and labels. [Engadget]

Google may be close to releasing Android Wear for iPhones. Will Apple allow it? I'm going to go with "naaahhh". [The Verge]

OnePlus Two may be pushed back to the end of 2015. That is one big budget smartphone bummer. [Android Community]

The upcoming Galaxy Note 5 will reportedly ditch its QHD screen for... wait for it, a UHD screen. That's 3840x2160 resolution for anyone keeping track. [PhoneArena]

All right. I officially need a 4K laptop now.