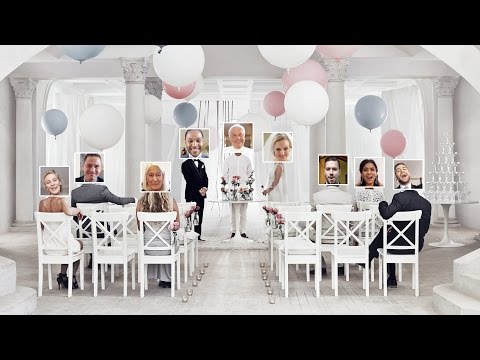 Scientists investigate how much we want to kill 1920s Hitler, Lollipop comes to Cyanogen, and online weddings take a turn for the dystopian. This is all the news and rumours you missed on BitStream.

Weddings are one of the few bastions of human society that’s remained largely untouched by technology. Yeah, your friend can get ordained online in like a day, and it’s easier to find that disappointing DJ, but it’s one of the few events left that serves as an excuse to get the whole band back together: cousins, aunts, uncles, parents, siblings, and that weird friend from college you felt you had to invite. But what if you could still have that togetherness without having to actually be together? Don’t worry: IKEA is on the case with their new online wedding service.

It’s everything you’d want in a world where technology is king and love is dead. You can just pick some far away destination, like a rustic farm or a sandy beach, invite all your Facebook friends, and bam. Wedding. Of course, if you want the thing to be real you still need an official and some witnesses in the same room. It would also help if, you know, the couple was there, too. So really, the best way to think of this is a way to send you mum a quick message when you get eloped so she can at least watch and not completely disown you. [IKEA]

Samsung’s New SUHD 4K TVs Are Out In Australia Now
Tips For Optimising Windows 8 For Smaller High-Resolution Displays
I Tried To Pay Foxtel For Game Of Thrones, But They Wouldn’t Let Me
Game Of Thrones Season 5 Episode 1 Recap: The Wars To Come
Welcome To Zynga, Where The Numbers Never Lie
Keanu Reeves Explains The Deep Web In This Awesome Aussie Animation
Rockstar Editor: Get Ready For More Awesome Grand Theft Auto V Clips
What If Game Of Thrones Were Animated?
Sharp’s Dumb Incredible 4K Smartphone Display Will Melt Your Face