Google has temporarily shut down its Map Maker program while it figures out how to stop people from inserting pranks into its maps, like the image of an Android robot taking a big pee on an Apple logo that prompted an apology last month.

The most recent incident was particularly troubling and unfortunate – a strong user in our community chose to go and create a large scale prank on the Map. As a consequence, we suspended auto-approval and user moderation across the globe, till we figured out ways to add more intelligent mechanisms to prevent such incidents.

Right now, Google is suspending the program starting tomorrow until it can deal with its backlog of edits, since it is manually approving them until it figures out a way to automatically detect pixelated streams of piss.

A soldier in the operating system enthusiast wars has taken to the streets of Google Maps to spread a simple message, one that transcends the artificial boundaries of language and culture.

If you look south of Rawlpindi, Pakistan, on Google Maps, you’ll see this unforgettable image of ruthless robot dominance and fruit submission, a tribute to the popular Bill Watterson-inspired populist decal-based art of the United States.

Unfortunately, as it does not correspond to a statue or landmark in Rawlpindi depicting the ongoing OS battle, the image is getting taken down.

“We’ve terminated the Android figure involved in this incident, and he’ll be disappearing from Google Maps shortly,” Google told The Guardian. You can still see it here, and on mobile.

While the indelible iconography of an Android robot relieving itself directly on top of an Apple logo suggests an affinity for Android, it looks like it was a user trying to get a rise out of Google. There’s another secret image just a few mils away from the first, hidden in the green space of the Tahkt Pari forest, making fun of Google’s review policy for Google Map Maker, its program that lets people contribute to the mapping project. 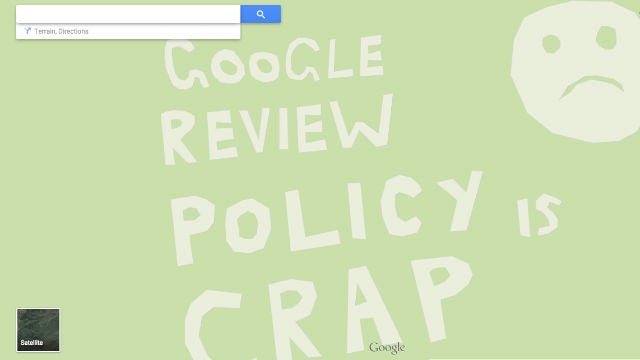