A Look At The Tefifon, Germany's Doomed 1950s Music Player 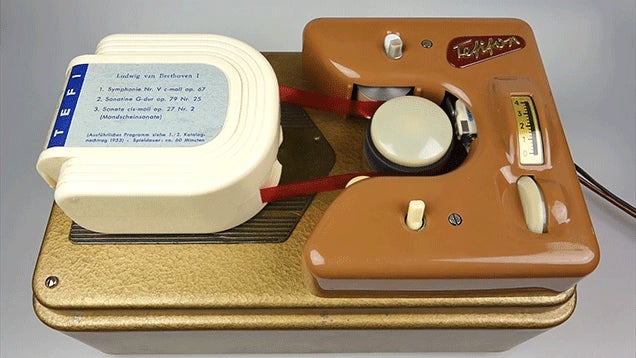 After World War II, people in the US started buying vinyl and record players more than ever before. But over in West Germany, another music player took off: the Tefifon.

Invented in the 1930s by a German engineer named Karl Daniel, the Tefifon is like a mash-up of several obsolete music technologies. Like an 8-track, it plays a cartridge. Unlike the 8-track, a Tefifon cartridge — called, adorably, a "Tefi" — is not magnetic. It actually works more like a record player, since the Tefifon reads these cartridges by pressing a stylus to deep plastic grooves. And like a Minidisc player, the Tefifon is now almost impressively obsolete.

Even though it never really made it out of West Germany, the Tefifon was a legit audio player at the time. Bigger cartridges held around four hours of music, and sound quality was better than shellac records. Then again, it was not as good as vinyl, and as the 1950s died down, so did the short-lived audio player. The Tefifon plant closed down in 1965. If they ever do a German reboot of Mad Men,this is one period detail they could get right for the early seasons. You can still buy vintage tefifons on Ebay. [Techmoan [Obsolete Media]] GIFs by Andrew Liszewski