A Homemade Jet-Powered Snowboard Is Maybe Not The Safest Idea 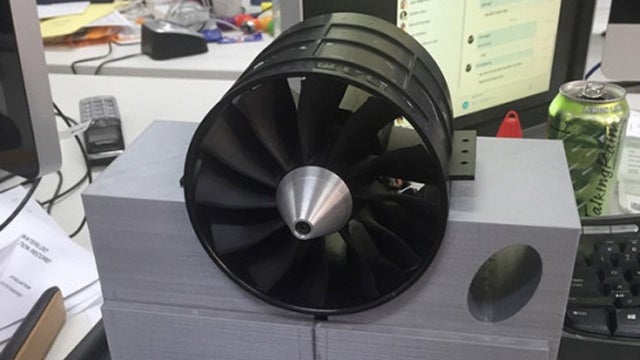 Look, I’m all for extreme sports (and general borderline-stupid shenanigans masquerading as sports). But I think I’d probably draw the line at a homemade, 3D-printed jet-powered snowboard.

The build is startlingly (worryingly?) simple: Jude Gomilla, the wannabe Mythbuster behind the project, got hold of an electric ducted fan with 10kg of thrust, Gorilla-glued it to a 3D-printed mount, and then Gorilla-glued that to his board.

Hook up an electric speed controller, a rechargeable battery he probably found in a dumpster, and you’re all set. Gomilla reckons he can hit 24km/h on the flats — not too shabby — but the 4000mAh battery runs flat in four minutes at full throttle.

It says a lot about the current state of DIYing (and the internet) that this is not, in fact, the first jet-powered snowboard concept to come floating across YouTube. Last year’s version used a set of four electric turbines, but attached to a bar rather than the actual snowboard. I’m not sure which concept is better, per se — some comparative testing and broken bones will probably need to happen to determine that — but have the same insane qualities. (And just a tiny dose of awesome.)

In either case, if you’ve read this as more of a how-to than an insurance claim form waiting to happen, you can head over to Gomilla’s site for a full rundown of the build process. [Jude Gomilla]