What ISIS Really Wants (According To The Islamophobia Industry) 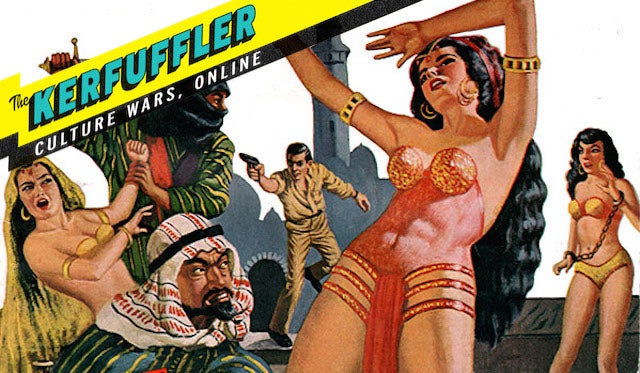 Welcome back, dear readers, to The Kerfuffler, where every other week we take a look at the culture wars raging online. This week we're looking at the debate surrounding the nature and aims of one of the first 'internet generation' terrorist groups, Islamic State.

As Western governments grow increasingly invested in anti-IS efforts, the foreign policy blogosphere has become obsessed with questions of what exactly IS is, and what they're after. Graeme Wood's Atlantic cover story "What ISIS Really Wants", which essentially claims that IS is best understood in a religious framework, has been particularly influential in this debate. The article went viral online, and remained one of the Atlantic's most-viewed stories for weeks afterward.

There are a number of problems with Wood's analysis. For starters he claims that IS is benefitting from an influx of jihadis "from around the world", which is "unprecedented in its pace and volume, and is continuing." This is part of a popular media narrative wherein, activated by a vaguely-described process of "online recruitment", legions of heretofore-dormant young Muslim men IN OUR OWN BACKYARDS are flocking from Boise and Birmingham to join IS. Even more nefariously, we're told, IS is recruiting young Muslim women using kittens and Nutella.

The problem with this narrative, dear reader, is that there is little hard evidence that this sort of thing is actually happening in anything like the numbers Wood and others cite. Even the arch-scaremongers of the CIA only put the number of Westerners in IS's ranks at a couple of thousand. Meanwhile, in the Arab world, social media is more likely to be used to mock IS than to mobilise for them.

This is just one example of the ways pundits writing about IS overstate its influence. Writers like Wood treat the group's aspirations as accomplishments, referring to its patchwork of tentatively-held bits of territory as a "hermit kingdom", and even more ridiculously, as a "caliphate". Indeed, Wood refers to Abu Bakr al-Baghdadi, IS's nominal leader, as "the first caliph in generations... the commander of all Muslims" despite the fact that only one in a hundred thousand of the world's Muslims recognise al-Baghdadi's self-granted title.

Wood went on to tell his tale of apocalyptic Islam gone wild on the blog of prominent New Atheist and professional Islam-basher Sam Harris. In their analyses of IS, Wood and Harris provide erudite, 'enlightened' versions of FOX News' more populist Islamophobic scare-mongering. While its rhetoric is more subdued, this middlebrow Muslim-bashing accomplishes the same goals as V.S. Naipaul's recent full-Godwin assertion in the Daily Mail that IS has literally become the Fourth Reich. This is a vast exaggeration of the threat posed by fanatics, but it does nicely justify an endless state of war.

Matthieu Aikins's recent Rolling Stone profile of the "hard men in Baghdad" — the mostly Shi'ah militiamen who are fighting ISIS — is more even-handed. "Iraq burns", Aikins writes, "and its fate will forever remain on our conscience." But even here this fact is treated as a crime of neglect rather than assault. Ignored are the ways in which the US's years-long war and occupation in Iraq — which boasted a much higher body count than IS — destroyed civil society and helped to create IS in the first place. This makes IS's roots and motivations appear more irrational and unfathomable, which in turn fuels the increasingly profitable and influential Islamophobia industry.

Though their voices are often drowned out, a few writers are pushing back. In The Intercept, Murtaza Hussain pointed out that Wood's "10,000 word exercise in confirmation bias" only cited one Islamic scholar. Writing for the New Statesman, Mehdi Hasan , citing testimony from actual escaped IS captives, disputes the very characterisation of IS as 'Islamic'. And in The Nation, veteran Middle East expert Juan Cole warns that the scaremongers are not only demonising Muslims, but allowing IS to control the narrative.

Your Kerfuffler, dear reader, would hope this goes without saying, but: None of the above is meant to diminish IS's vileness. Their aims are horrific, and their tactics are monstrous. No one should have to live under their rule.

But when one asks what is to be done about brutalisers, one must guard against the rhetoric of other brutalisers. So it's worth asking: Is IS the advance guard of a frothing horde of Muslims THE LIKES OF WHICH THE WORLD HAS NEVER SEEN (even though, confusingly, they also supposedly come straight from the dark ages)? What do they really want?

On these questions your Kerfuffler finds the assessment of one of the most famous Muslims in America — ex-NBA star and cultural commentator Kareem Abdul Jabbar — more incisive than thousands of words by professional terrorism 'experts.' Asked on the Morning Joe show what IS really wants, he responded:

It's a play for money and power, and these people try to impose their will on people so people will listen to them, and they can be in charge. That's all it's about. They have taken on a fascist attitude and a fascist approach to everything. You do what we say or you die....You can make parallels to things that have happened here in America. Like the Ku Klux Klan saying they are the Christian knights, and they do not practice Christianity.

In these things — the use of grisly violence to control other peoples' lives and money, the exploitation of religion's most regressive tendencies — IS is hardly new. And, sadly, they are hardly alone — in the Middle East, or in the world.