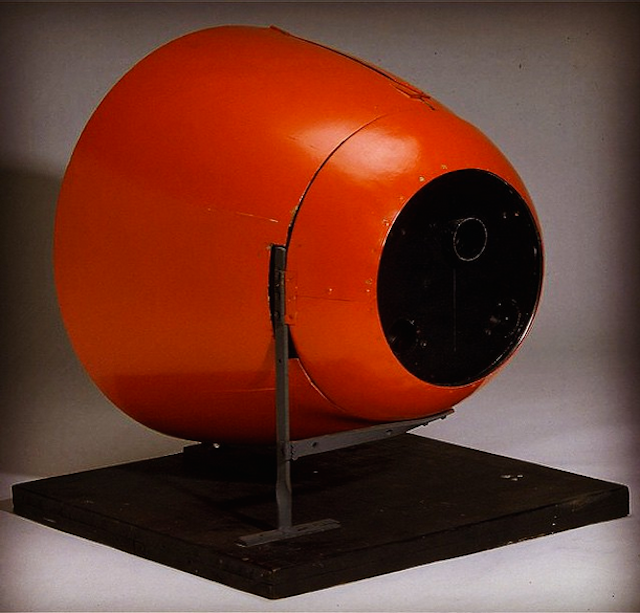 Yesterday, in 1904, psychologist BF Skinner was born. His contribution to the world? This pigeon-guided missile system, among other things. Yes, actually.

According to the Smithsonian American History Museum's official Instagram:

During World War II, the US military needed to find accurate ways to guide missiles to their targets. University of Minnesota psychologist BF Skinner suggested that a missile nose cone be supplied with three compartments, each with a window. A pigeon would be placed in each section, and trained to peck on the window when the target appeared. If all three pigeons pecked, the weapon would be released. This prototype was never developed, but influenced later work on animal training.

I'm going to go out on a limb and say it's a good thing this particular weapon of war was never deployed. First off, I can't help but feel like someone would quickly find a way to subvert pigeons from their correct target. Moreover, suicide bombing birds is just plain cruel. Still, the idea of pigeons hurling across the sky, raining judgement down upon our enemies in this kind of adorable little retro-future contraption is worth a laugh. Americans are nothing if not inventive.

Tegan Jones 28 Jan 2020 10:07 AM
A fresh year means a fresh batch of Australia's finest being captured doing dumb, dangerous and sometimes-hilarious things on the road. Dash Cam Owners Australia is back for 2020 and they're coming in strong with runaway furniture, fanging a rise-on mower on the road and some questionable usage cases for roundabouts. I for one didn't know I needed to see the drivers of two restored vintage vehicles get into a water pistol fight at a traffic light... yet here we are.