This Machine Builds Obscure Molecules From Scratch In Hours 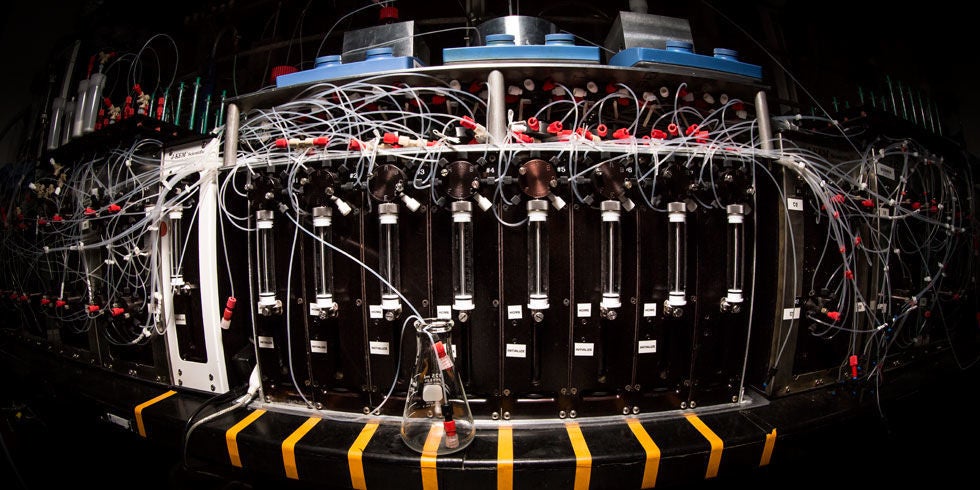 This tangle of tubes, bottles and electronics may look a mess — but its appearance belies its impressive abilities. This is a small-molecule synthesiser, a kind of chemical 3D printer, and it can be used to construct the most obscure of molecules from scratch.

Created by a team of chemists from the University of Illinois, led by Martin Burke, the machine can be used to synthesise any one of thousands of different molecules starting with a set of more everyday chemicals stored within its bowels. The labyrinthine tangles of tubes brings together those chemicals in a series of deprotection, coupling and purification steps that allow it to build the resulting molecules. A description of the device is published in Science.

The whole system breaks down chemistry into separate chemical steps that can be combined to build new compounds with precision. Those steps may include stripping hydrogen atoms from water molecules, say, building a neat hexagonal ring of carbon atoms, or adding a cyanide group to a molecule in safety. Each step takes the constituent products required for the particular reaction, combines them, lets the reaction happen, then washes away any by-products. From there, the next step can be carried out — and so the process continues.

Many of the details of how the machine works are proprietary, although Burke does explain to Popular Mechanics that the hardest part in the design was working out how to reliably flush out by-products. Burke and his colleagues have shown that the system can be used to create thousands of different chemicals, including "natural products, materials, pharmaceuticals, and biological probes," the authors write. The length of time required to produce the new molecules varies depending on how complex they are, but it's typically of the order of hours.

While the device can produce thousands of chemicals right now, Burke wants to go further, making a machine that can synthesise an almost limitless array of compounds. The goal, then, is a machine that does for chemical synthesis what 3D printers do for manufacturing: to allow relative amateurs to create products in a matter of hours that would have taken even highly-trained professionals days or weeks in the past.

It might be a while before everyone has a small-molecule synthesiser in their house — but the prospect of being able to manufacture your own prescriptions at home rather than trekking to the store is a tempting one. And one that now may just be possible. [Science via Popular Mechanics]