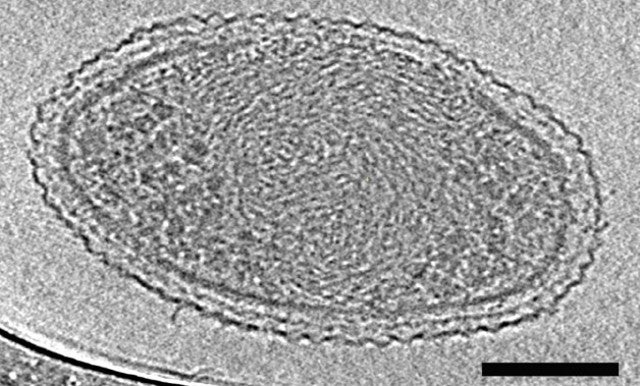 This picture might look a little grainy, but you're actually looking at the first detailed image of the ultra-small bacteria that are believed to be "about as small as life can get."

The image was acquired by scientists from the US Department of Energy's Lawrence Berkeley National Laboratory and the University of California, Berkeley. The ultra-small bacteria, thought to be fairly common, are difficult to image — not just because they're small, but also because they're quite delicate and can easily die. These samples were captured by being flash frozen to -272C before being transported to the lab.

While they're common, their role in the natural world is poorly understood. "They're enigmatic. These bacteria are detected in many environments and they probably play important roles in microbial communities and ecosystems. But we don't yet fully understand what these ultra-small bacteria do," explains Jill Banfield, one of the researchers who acquired the images using cryogenic transmission electron microscopy.

It is thought, however, that this is as small as a cell can be while still accommodating enough material to sustain life. With an average volume of just 0.009 cubic microns, they're certainly pretty small; in fact, you could fit more than 150,000 of them into the same volume as a single E-coli cell. And now, you known what they look like. [Nature, Berkeley Lab via Engadget]