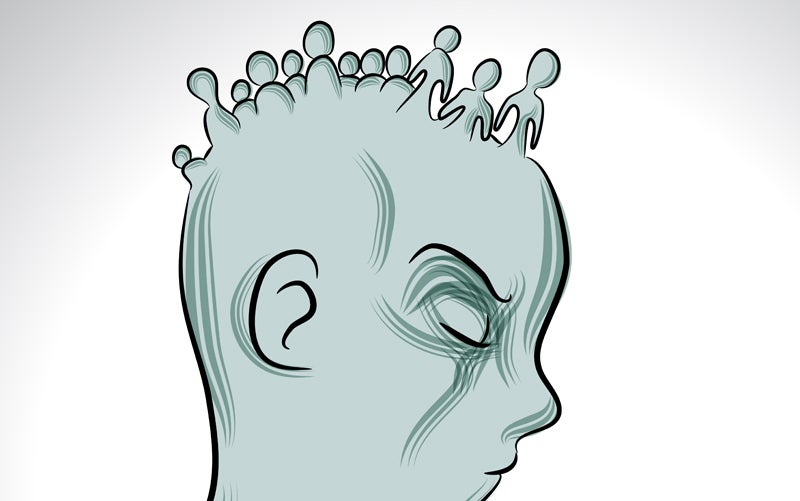 Have you ever had a voice in your head that didn't feel like your own? Or heard a voice speaking out loud that you know wasn't really there? Psychologists used to say these were signs of mental illness. But now it turns out that they aren't that unusual — and even people who hear a lot of voices have a wide range of experiences with them.

A new study published this week in The Lancet Psychology is the result of an online survey and in-depth analysis of 153 people who have heard voices. What the researchers found was that there is huge variation in ways that people "hear things." For example, the stereotype of a person with schizophrenia is that they hear angry voices telling them to do terrible things — we've all seen this in countless bad movies. But many people who hear voices say that they aren't so much "voices" as they are characters, with personalities, who are trying to hold conversations. Often they are internal voices and don't say anything aloud. It's almost as if they are exaggerated of the kinds of internal dialogues we have in our heads every day, as we debate what to do after work or whether we should really blow a bunch of money on the new MacBook.

Indeed, Durham University researcher Angela Woods, who led the study, noted that as many as 15 per cent of people who report hearing voices haven't been diagnosed with any psychological disorder. She and her colleagues believe that "hearing voices" is far more complicated than anyone had ever realised — sometimes they even involve physical sensations like tingling in the hands and feet. People who hear voices say that they can be troubling, but they can also be friendly. Often, therapies can help them understand the voices as parts of themselves, cluing them into subconscious concerns.

In a release, Woods said:

We call into question the presumed auditory quality of hearing voices and show that there is an unrecognised complexity in the 'character' qualities of some voices.

It is crucial to study mental health and human experiences such as voice-hearing from a variety of different perspectives to truly find out what people are experiencing, not just what we think they must be experiencing because they have a particular diagnosis. We hope this approach can help inform the development of future clinical interventions.

The implication here is that there are a wide range of experiences for people who hear voices, and that many of them don't fit the typical definitions. Woods and her colleagues believe that psychology researchers need to talk to more people who hear voices in order to understand the full range of what the experience is like — as well as how we can treat it, when needed.

The entire study is available online at The Lancet Psychology.