Happy Hour: Can An On-Demand IV Really Cure A Hangover? 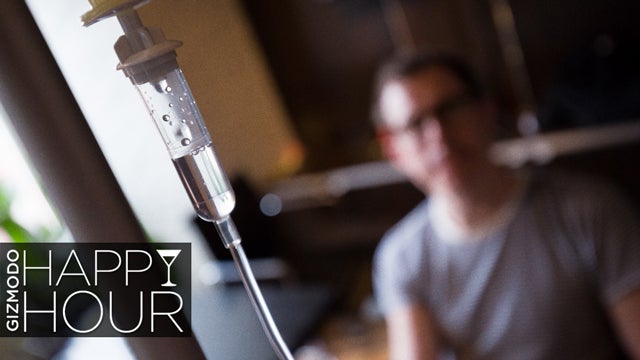 Last night, I drank a lot of tequila. It was very good tequila! But it was a lot, probably an irresponsible amount for a school night. I slept poorly, and when I woke up, my brain felt like an egg yolk getting swirled around in a bowl, ready to break. I needed a cure.

The bad news is that there's no such thing as a hangover cure. There's just not. Scientists don't even entirely understand how alcohol makes you drunk and gives you a hangover. They certainly haven't discovered a surefire cure to cancel out the effects. Plenty of people have tried! However, the dreaded hangover is a riddle that science has yet to solve.

The good news is that attempts at hangover cures are getting more sophisticated. Here in New York City, with little more than a few clicks and a pocket full of cash you can literally order a nurse to come to your home with a specially formulated intravenous remedy from a company called the Hangover Club. And that's exactly what I did with my fancy tequila flu. It went ok.

Let's get one thing straight

There is no such thing as a hangover "cure." I really have to hammer this point home.

You've been told that hangovers are caused by dehydration or low blood sugar or toxic byproducts of your body breaking down ethanol. None of those entirely explain the affliction, however. The latest science suggest that hangovers are actually an inflammatory response caused by a spike in molecules called cytokines. Meanwhile, some booze (read: whiskey) causes worse hangovers than others (read: wine).

The splitting headache is only part of the problem. After a night of heavy drinking, most people also feel nauseated, weak, even a little stupid. Some get shaky. Some get pukey. Some get a little poopy. Such is the aftermath of consuming too much alcohol, a substance that is fun in small doses and deadly in large doses.

All that said, there are remedies that help. Coffee and Tylenol is my go to. It addresses the dehydration element and the brainhurt element head-on. All of that other stuff? Well, I usually just deal with it and complain a lot. But that's exactly where the Hangover Club's very expensive and very sophisticated remedy comes in handy.

The Hangover Club's origin story is almost too rehearsed. The founder, Asa Kitfield, went to Miami for his bachelor party, wanted to die halfway through, and had visions from his childhood. His dad, a doctor, used to give him IV drips as a kid — cool dad — to help him get over being sick. Maybe a similar sort of medical solution could help cure his hangover.

Kitfield survived his bachelor party and met a doctor named Maurice Beer. This name is the source of endless amusement for Kitfield, who reminded me several times during the course of our interview that his co-founder was actually named "Dr. Beer". Dr. Beer runs a clinic in Manhattan that offers "an investigative approach to complex medical problems," an approach that apparently includes something called "health and wellness drips." (Think: IV vitamin therapy.) His name is also Dr. Beer.

Health and wellness drips are the oxygen bars of the 21st century. In fact, there's at least once brand-centric clinic in Arizona called the Drip Room where you can suck on oxygen and get an IV full of vitamins at the same time while sitting in a massage chair. They also offer Botox treatments, but that's another story. 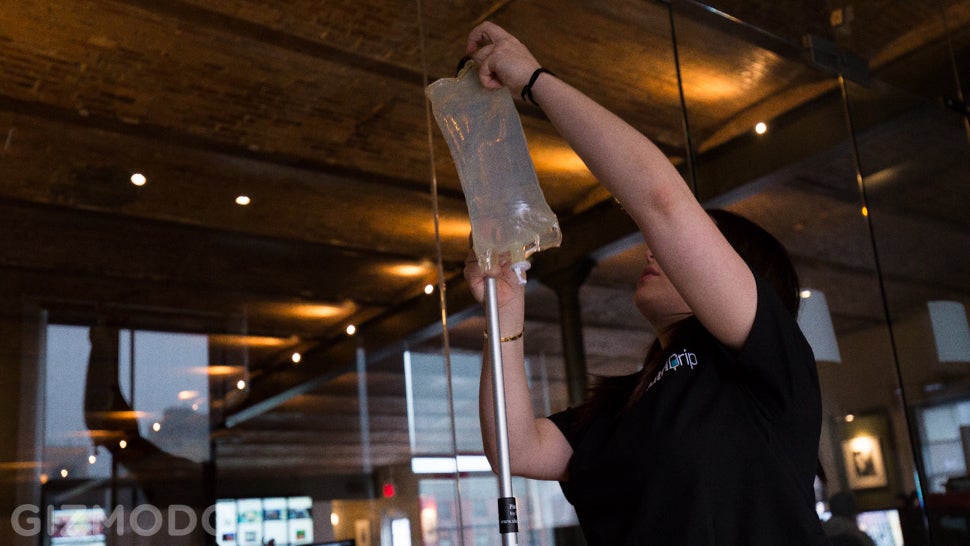 The Hangover Club feels similar, only more ridiculous. The company's website advertisings "on-demand home service" and "hangover relief in as little as 30 mins." You can even get an IV drip in a bus. Then, underneath pictures of pretty girls laughing under IV bags, come the packages.

The Super includes the same solution and choice of either pain or nausea medication, but you also get "Super B's Vitamin Booster." This is a blend of B vitamins that's supposed to help with your energy levels and brain fuzziness. And since you're mainlining the vitamins, your body is supposed to absorb them more efficiently. The Super costs $US220 for the in home treatment or $US150 for the Hangover Bus. 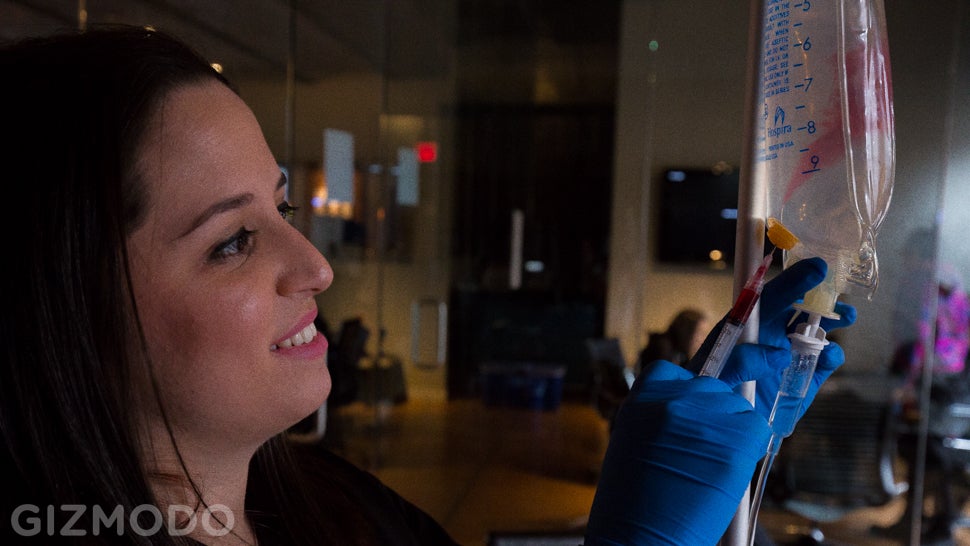 The Mega is what I got. It also includes the solution, the choice of medication, and the vitamin B blend but adds a high dose of vitamin C as well as liquid magnesium. That cocktail is all mixed in with the lactated ringers solution throughout the treatment. You also get an extra special Glutathione Detox Push at the very end of the treatment. This is a shot of antioxidants that's blasted directly into your veins. The Mega costs $US250 for in home and $US170 for the bus.

The whole experience is supposed to take between 20 and 45 minutes, depending on your body. There's just one prick for the initial IV, and then, you just sit back and relax.

I was not expecting to get an IV at work on a Friday morning. I was also not expecting to sample three cocktails and six different types of aged tequila (about one shot each) on Thursday night. So I felt rough. I did my regular coffee and Tylenol routine, finished up a blog post, and suddenly, the opportunity was there.

Would I like an IV drip that promised to make my hangover go away in 30 minutes? This is more or less what my editor asked. Another Gizmodo writer had scheduled the Hangover Club to stop by for a test, but something came up. We needed a pinch hitter. I rolled up my sleeves and promised I felt hungover as shit. I did.

In the office conference room, there was a friendly looking nurse with a backpack full of less friendly looking medical equipment. As soon as I sat down, she took my vitals and then phoned them into an advisor who would decide whether or not I was healthy enough to receive the treatment. Somehow, I was, and the next thing I knew I had a needle in my arm. 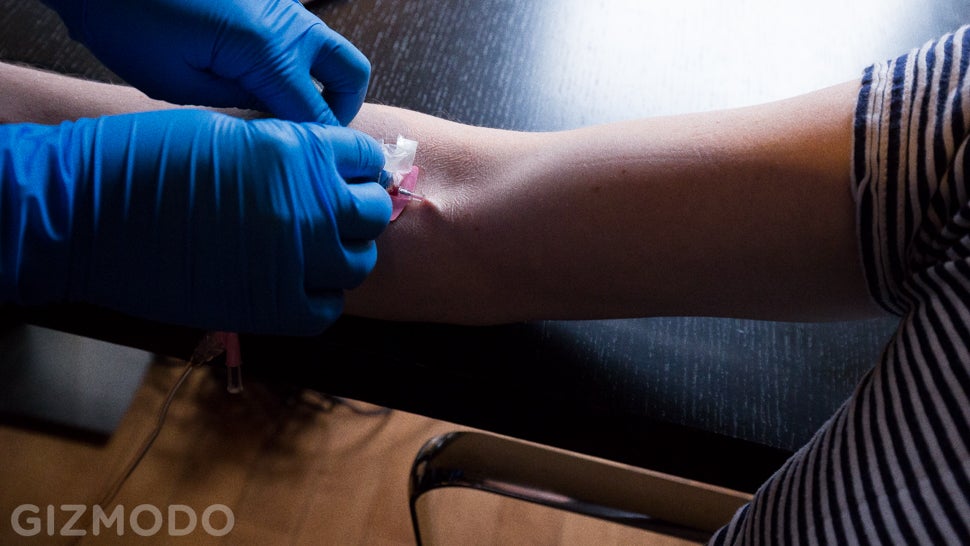 "You might feel a cold sensation," the nurse said as she hooked up the lactated ringer solution and our photographer took unflattering photos of my veins.

"What's that?" I asked, unsure whether or not I wanted to feel a cold sensation in my veins. That's what happens to vampires!

"The solution's cold from being outside," she explained. I looked out the window and snow had started to fall on the city streets. Around the same time, my veins started to get all Dracula on me. It was indeed quite cold, but at least I knew the yummy anti-hangover fluid was flowing through my body. 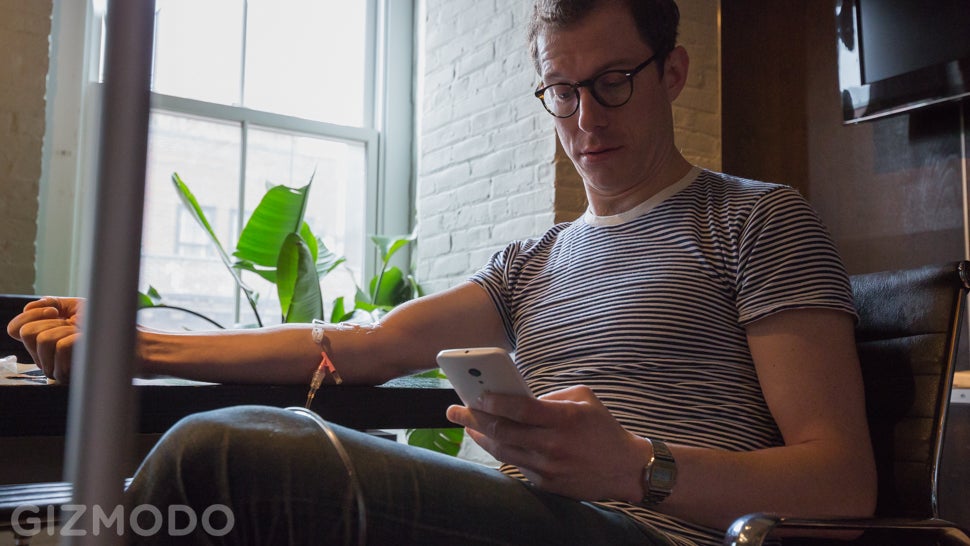 Over the course of the next 30 minutes, I asked a lot of obnoxious questions about what that bottle was and what this syringe did. She was knowledgable and nice. I learned that she worked the night shift at a nearby hospital and freelanced for the Hangover Club in her free time. This was comforting news as I watched her inject many different colours of fluid into my body. The bag of solution shrunk and shrunk, and by the time she gave me that last blast of antioxidants, I was surprised it was all over.

So does it work?

It's hard to say when my headache went away. I didn't experience that superheroic sensation that people sometimes brag about after getting an IV, but I definitely felt better when I stood up after the treatment. That ready-to-break egg yolk brain feeling had dominated my brain all morning was gone. I felt a little more alert. But I felt a lot more normal.

That's the best anyone could ask for in a hangover cure, I guess: to feel normal. I also felt like I had to pee, like, really badly. I guess that's natural since a nurse had just injected a litre of fluid into my body. After that, I felt even better. Or more normal, I guess.

Within an hour or two my headache was back but only as a shadow of its former self. I can only assume this is because the pain medication wore off and whatever inflammation that made my head hurt earlier decided to stick around a little longer. The stupids, however, did not return. That brainless feeling is my least favourite part of a hangover. (It's also potentially the cause of billions of dollars in lost productivity due to excessive drinking — or so says the CDC.) My day at work was probably more focused and certainly less shaky.

Was that because of this amazing — and amazingly expensive — remedy? Or was it because I'd spent over 30 minutes in a medical setting convincing myself that I was curing my hangover? Probably a little bit of both. 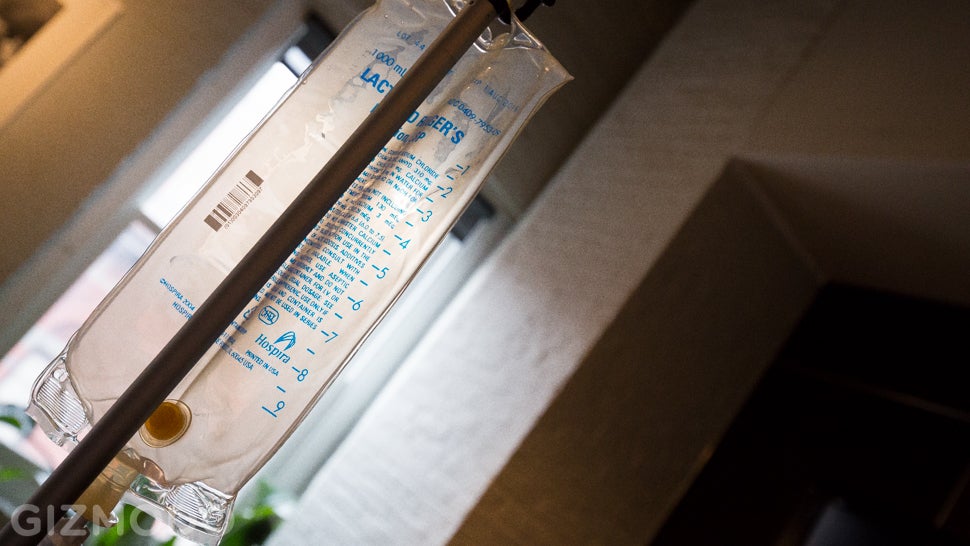