Curiosity Has Found Nitrates Important For Life On Mars 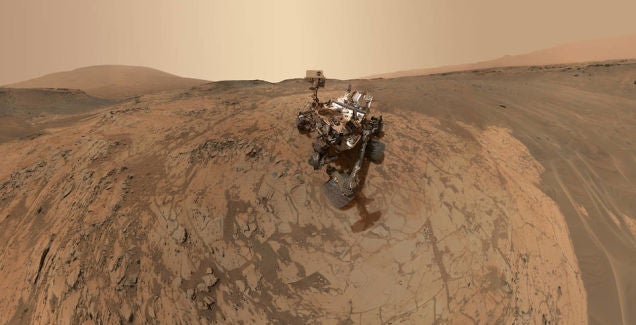 Samples obtained by NASA's Curiosity rover on Mars have been analysed and shown to contain nitrogen compounds, that are a source of nutrients for living things.

Researchers have been scouring Mars for signs of organic carbon, but they have now discovered signs of nitrates at three areas on the Red Planet — Rocknest, John Klein and Cumberland. The sites were visited during a detour from the rover's main mission to visit Mount Sharp. The finding adds a little more weight to the suggestion that Mars could have once played host to life.

Rock samples from these locations were analysed in Curiosity's on-board lab — a kind of oven that breaks samples down and then senses presence of particular compounds. Subtracting contamination effects from Curiosity itself, the researchers observed the presence of nitric oxide, which is known to be produced from nitrates.

The quantities of nitrogen compounds varied between the sites, with nitrogen levels of between 70 and 1100 parts per million. That's comparable to dry places on Earth like the Atacama Desert.

"People want to follow the carbon, but in many ways nitrogen is just as important a nutrient for life," explained Jennifer Stern, a NASA geochemist, to the LA Times. "Life runs on nitrogen as much as it runs on carbon." Nitrates are an important source of nitrogen for living things, because it's easier to obtain the element by breaking down such compounds than it is to extract it directly from the air.

The researchers posit that the nitrates were most likely formed by a thermal shock — such as lightning strike or asteroid impact — as opposed to by living things as they are on Earth. But they don't known for sure; that's the next thing they want to find out. [PNAS via LA Times on PhysOrg]