California Has Just One Year Of Water Reserves, So... Water Cannons? 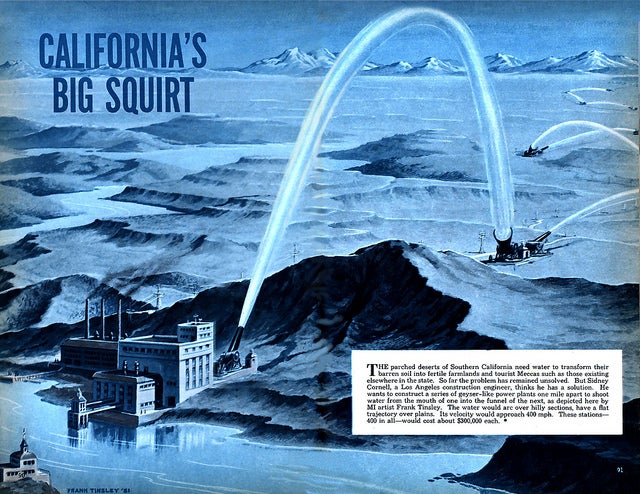 Jay Famiglietti, a senior water scientist at the NASA Jet Propulsion Laboratory, has a terrifying piece in the Los Angeles Times about the future of California's water. According to Famiglietti, the state has just one year of water in reserves.

Data from NASA satellites show that the total amount of water stored in the Sacramento and San Joaquin river basins — that is, all of the snow, river and reservoir water, water in soils and groundwater combined — was 34 million acre-feet below normal in 2014. That loss is nearly 1.5 times the capacity of Lake Mead, America's largest reservoir.

Statewide, we've been dropping more than 12 million acre-feet of total water yearly since 2011. Roughly two-thirds of these losses are attributable to groundwater pumping for agricultural irrigation in the Central Valley. Farmers have little choice but to pump more groundwater during droughts, especially when their surface water allocations have been slashed 80% to 100%. But these pumping rates are excessive and unsustainable. Wells are running dry. In some areas of the Central Valley, the land is sinking by one foot or more per year.

And it gets worse. Apparently we have no real plan for dealing with the continuation of our current drought. So what's Famiglietti's solution to this problem? Immediate mandatory water rationing, the acceleration of legislation that focuses on sustainability, and the creation of a new state task force to come up with long term solutions. Pffffft. Good luck.

That all sounds hard. Like really hard. Even in a state that didn't have completely dysfunctional government, that would be hard. So may I suggest an idea from history?

In the early 1950s a construction engineer by the name of Sidney Cornell proposed shooting man-made geysers from Northern California to Southern California. The illustration above ran in the October 1951 issue of Mechanix Illustrated magazine, showing how this whole thing was supposed to work. The system would leapfrog water down the state, with plants spaced one mile apart. Of course, with Northern California also struggling, we'll have to pull that water from somewhere else. Alaska, maybe?

Yes, it's a really idiotic idea. But it seems about as likely as getting anything done politically at any level in California's government right now. Forget the Hyperloop. Bring on the water cannons!