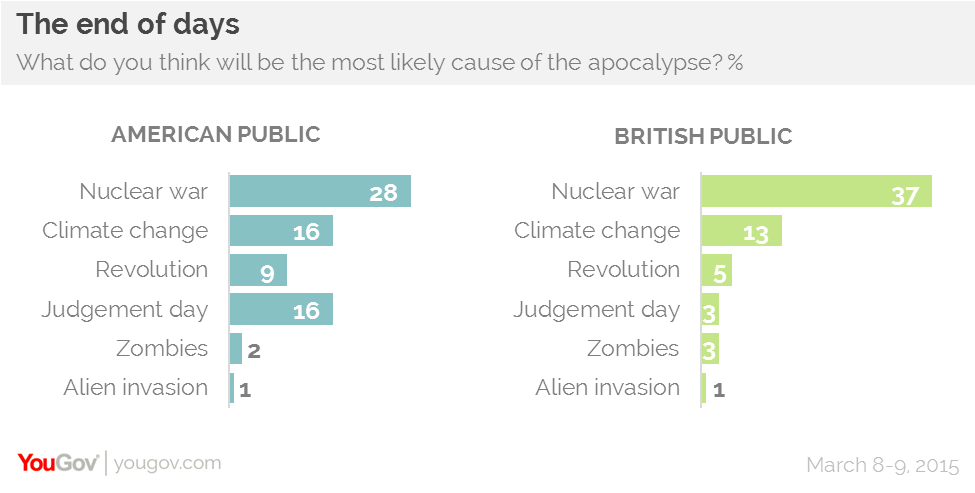 Market research company YouGov wanted to know how people in the US and the UK expected the world to end. What they found revealed a profound difference between the two countries.

People in both nations fear the end of days will come on the heels of a nuclear war. Not too surprisingly, Brits feared this more — perhaps because their nation has already lived through some pretty horrific bombings. Both nations also fear climate change, although interestingly people in the US fear it more. This seems to fly in the face of the stereotype that US people are the least concerned about climate change in the world.

But here's where the big difference was: 16 per cent of US citizens polled feared that the world would end due to the Christian Judgement Day. Only 3 per cent of UK people believed this.

Also, the more conservative you are in the UK, the more likely you are to believe the world will end in your lifetime. The ultra-right wing UK Independence Party, or UKIP, has attracted a lot of doomsday types. According to the survey, "31 per cent of UKIP voters think there will be an apocalyptic disaster in their lifetime compared to 21 per cent of Conservatives."

Why a market research organisation wants to know our deepest fears about the end times is itself a kind of sinister question. Are they hoping to find the best markets for prepper materials?