Athletes were among the first to adopt and wear fitness trackers, which is why they’re all styled to look like an athletic accessory. But since everyone can benefit from a little motivation to stay active, especially those stuck behind a desk, we’re starting to see fitness trackers that look more like classically-styled watches.

Withings’ Activité Pop was the first, but now Mondaine has used a tasteful touch of Helvetica for its own fitness-tracking watch that anyone would want to wear all day long.

If Mondaine sounds familiar to you, it’s because that’s the company who successfully sued Apple for millions of dollars after the design of its Swiss Federal Railway clock was copied on the iPad under iOS 6. And that money’s clearly been well spent now that Mondaine has just revealed its Helvetica No. 1 Smart that skips the battery-sucking touchscreen LCD display of other smartwatches for a more traditional analogue dial at the bottom of its face. 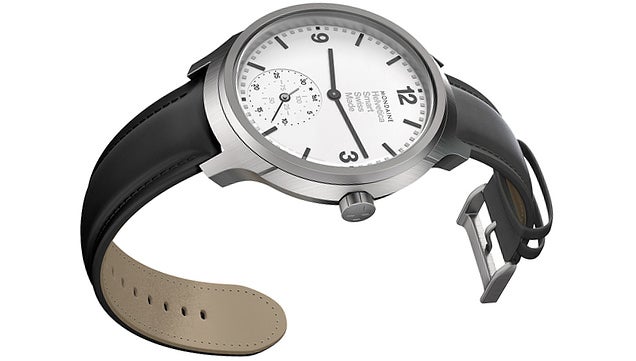 But calling the Helvetica No. 1 Smart a smartwatch might be a bit of a misnomer. A smarter watch might be a more accurate description because it doesn’t handle notifications, or let you send text messages from your wrist. Its classical form factor is instead hiding basic fitness and sleep tracking functionality courtesy of a company called MotionX.

Your daily level of activity can be monitored using the watch’s smaller analogue dial, but it also connects and uploads your data to an accompanying iOS or Android app over Bluetooth so you have access to a more in-depth breakdown of your fitness metrics. So while functionality on the watch side of things is basic, through the app users can keep tabs on where they could be improving their fitness regimen, or what factors might be hindering them getting a good night’s sleep.

Available later this year, Mondaine’s Helvetica No. 1 Smart is still being positioned as a fashion accessory over a fitness tracker, though. While the Withings’ Activité Pop will sell for $US150, the Helvetica No. 1 Smart will be just shy of $US900 easily making it the most expensive fitness and sleep tracker you can strap to your wrist, but also one of the most stylish.