Why It’s Impossible To Design A Perfect Spacesuit 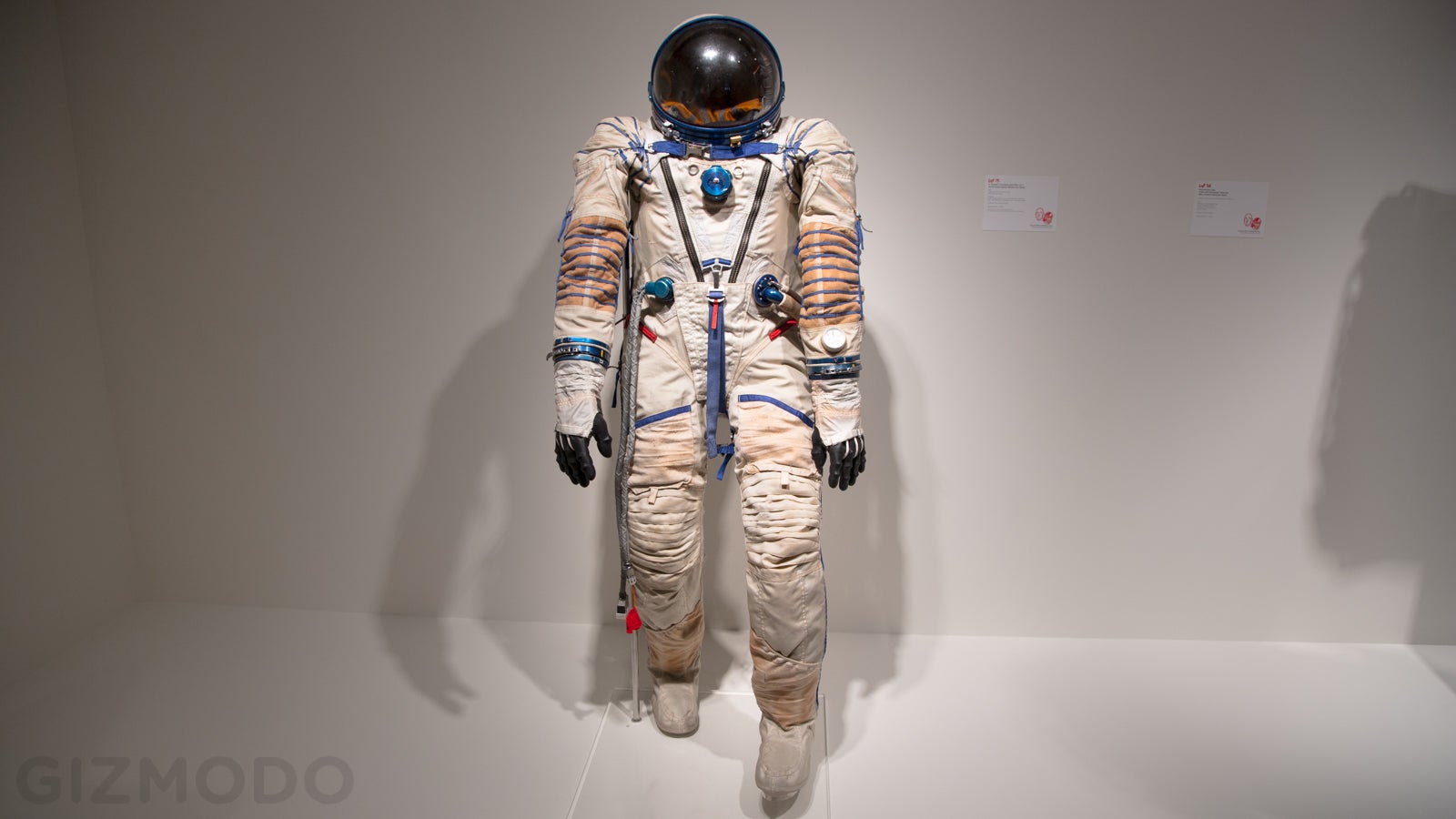 The first factor that needs to be considered in the design of a space suit is “what will the suit be used for?”


There is no universal suit. The suits are designed for particular mission needs. For example, technically the Russian Sokol suit is a space suit, but it is not designed for use outside. Its mission is to protect the cosmonauts from the vacuum should their Soyuz capsule depressurize. The Sokol’s mission requires it to be small and flexible so that it can be worn inside the cramped Soyuz and within the seat of the Soyuz. Because it is not intended for use outside the spacecraft, it is not designed for robust life support or thermal control or to be resistant to snags, tears, and punctures.

The Russian Orlan and the American EMU are both designed for use outside a vehicle. But they are not designed for use on the surface of a body, such as the Moon or Mars. Look carefully at the EMU and you’ll notice it doesn’t really have boots – there is no rigid protective sole like there was on the Apollo space suits that were used for walking on the moon.

I haven’t addressed the Chinese Faetian here, but it is largely a clone of the Russian Orlan.

Designing a spacesuit turns into a battle between protection and mobility. The more we try to protect the wearer, the less mobile they become. The more mobile we make them, the less protected they are.

Vacuum is, of course, the most important concern. Fluids flow from areas of high pressure to areas of low pressure. In a vacuum, all of the gas and liquid in the body will try to get out. Every square centimetre of skin will tighten as the contents under it push outwards, trying to get to that vacuum. A spacesuit has to prevent that. So far, spacesuits have accomplished that by creating a leakproof outer layer that envelopes the body and then maintains a layer of air between the body and that layer. That air is not at the normal air pressure (14.7 psi) though. To do so would make the suits rigid and require the astronauts to use great force to bend their arms and legs. The EMU is pressurised to 4.3 psi and the Orlan to 5.7 psi.

Both the EMU and Orlan use urethane-coated nylon for the pressure bladder.

An alternative that has been suggested is to use pressure bands of material that fit snuggly against the skin, squeezing it so that it doesn’t expand. There are some really cool designs for these kinds of suits, but there are a lot of good reasons why neither NASA nor Roscosmos have adopted this idea, so far. In microgravity, donning a suit becomes more challenging. For the Orlan the integrated backpack unfastens and swings outwards and the cosmonaut climbs into it from the rear. For the EMU, once the solid torso is on, the arms and legs can be slipped over and fastened.

But a skintight pressure band suit would be like putting on a wetsuit that was two sizes too small, with no talcum powder and no ground to rest against. Is it worth it to gain some mobility if the cost is two additional hours of preparation and crew members that are exhausted before they walk out the door? These suits also cause a lot of chaffing and can be quite painful if there’s a weak spot. They also make thermal control a lot more complicated. It is an area well worth researching, though. Dava Newman at MIT is doing just that. One challenge she is facing is how to successfully connect a gas-pressurised helmet to a compression-pressurised suit. Another challenge is that to fit properly, such suits need to be tailored for each user – but six months in space changes the shape of a crew member’s body. Here’s an image of one of her suit designs: 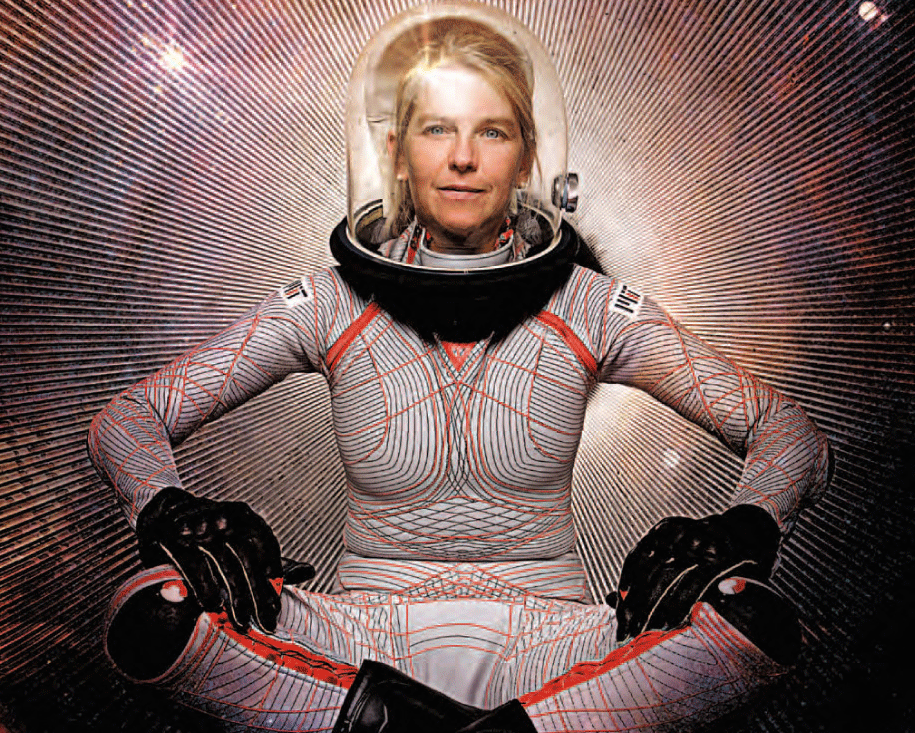 In direct sunlight, a spacesuit can heat up to over 200 degrees Celsius. In darkness, it can cool down to -200 degrees Celsius. A lot of that can be handled with outer layers that reflect radiation or prevent internal heat from leaving, but quite often the thermal concerns are more about the heat generated by the crew members, themselves. An EVA crew member is exerting themselves. The thermal system has to be able to wick away their excess body heat. Both NASA and Roscosmos do this using an LCG (Liquid Cooling Garment). That is a bodysuit that looks a bit like thermal underwear, but has tubes running through it. Cold water is pumped through those tubes. The body heat is conducted from the skin to the tubes and then convected away by the pump and then sublimated to space. A skintight pressure band suit on top of an LCG is a challenge.

Space is full of nasty radiation that can harm the crew. A spacesuit needs to protect the wearer from some of that threat, whether it be ultraviolet radiation from the sun, cosmic rays, or radiation from a transmitting antenna.

A grain of sand at orbital speed is like a bullet. While the suits can’t stop large debris, they need to be resistant to tiny debris, both to prevent grievous wounds to the crew member and to maintain the pressure volume of the suit. We do this by having multiple layers of resistant material. The outer layer of the NASA EMU has kevlar embedded in it.

Both the EMU and Orlan use an outer layer of orthofabric with layers of aluminised mylar beneath it, for protection.

NASA has strict requirements for equipment design to prevent sharp edges, but long exposure in space causes pitting and scarring from small debris. What was once a smooth handhold might develop sharp projections that catch on gloves and suits, snagging and tearing them. NASA has actually made alterations to its EMU gloves, since ISS began, because of this issue.

Helmets must protect the head, so all designs require they be composed of a rigid, strong material. The EMU helmet is made of polycarbonate. The bulk of the helmet and the mechanisms used to connect it to the torso limit the ability to turn the head to look at something. It’s a bit like Michael Keaton’s Batman. His stiff cowl prevented him from turning his head, so he turned his body – except that we can avoid some of the body turning by making the helmet oversized so that the head can turn within it and then giving the visor as much field of view as possible.

Lighting is very important for a crew member to be able to perform their work, outside. Because the sun rises and sets every 90 minutes, in low Earth orbit, the crew member needs to be able to quickly add light or remove light. They add by using helmet lights and remove by sliding down a second visor that is coated in gold – it’s like putting on sunglasses.

The torsos tend to be fairly rigid because they have to hold most of the interface and equipment. In a bulky suit, reach and flexibility are challenged, so any controls the crew need to access need to be either on the forearms or chest.

They need to be flexible. They should also protect against injury. Shoulder injuries are not uncommon for EVA astronauts.

Making a glove suitably protective and yet flexible and small enough that the fingers can perform normal tasks like holding a screw or pushing a button, is a challenge. Go put on oven mitts and then try to use a screwdriver to take apart your TV remote control.

Far from the body heat of the torso, the gloves need to be heated.

A little known fact is that astronauts that perform EVAs often lose fingernails because of the way the glove fits.

The EMU has an advantage over the Orlan, here. Anthropometric range means how much of the population can wear the suit. The Orlan is a single suit that can’t really be adapted easily for people of different sizes, whereas while all of the EMUs share a common torso, the arms and legs are easily swapped out for taller or shorter crew members. The Orlan is one size fits all (although there are straps that can be pulled in to adjust the arm and leg length a little). The EMU can handle 5th percentile females through to 95th percentile males.

Spacesuits are incredibly expensive to produce. We don’t want to have to produce custom suits for every person, so the suit of the future should be designed such that it can easily be modified to fit the astronauts and cosmonauts.

The spacesuit should be designed such that a neutral body posture requires no effort to maintain.

Russian Orlan suits are certified for 15 uses or 4 years and then are thrown away. The American EMUs are refurbished and can last more than 25 years. But as mentioned earlier, neither is designed for use at a location like the Moon or Mars. Environments like that are hard on suits. There is dust, there are rocks. A suit for that use needs to be easily maintained and cleaned. Preferably, it should repel dust and dirt, since taking that inside the spacecraft or base could present safety concerns (e.g. respiratory distress from sharp dust).

The American EMU is designed for about seven hours of use and the Orlan for about 6.5 hours. Spacewalks require a lot of preparation. We would not want a suit that could not operate as long as the EMU or Orlan.

Orlan and EMU have active thermal control systems that include liquid cooling garments and they cool through use of a sublimator. Both can handle almost 600 watts of metabolic rate.

Urinating, defecating, and vomiting are all things that may be done while in the spacesuit.

The suit needs to provide drinking water to the crew member. They sweat profusely while performing an EVA and need to have that water replaced. Long EVAs also require a snack bar to ensure blood sugar doesn’t drop too low.

The weight isn’t important for EVA in low Earth orbit, but can become a factor walking on the Moon or Mars. The EMU weighs about 280 lbs (127kg) and the Orlan weighs about 230 lbs (104kg).

A suit should support the use of safety tethers, tool belts, and use of standard worksite handles and restraints and tools.

HUD (Heads Up Display) – The ability to project telemetry and even work aids like schematics, parts images and procedures would be of benefit to the crew.

About the author: Robert Frost works in the Flight Operations Directorate, at NASA. He spent 10 years training astronauts and flight controllers on the guidance, navigation, control and propulsion for the International Space Station and five years in the Spaceflight Training Management Office managing projects and conducting an instructor training course. He now works in the flight control group for visiting vehicle systems and advanced technology integration for the ISS.

What are all the factors considered in the design of a space suit? originally appeared on Quora. You can follow Quora on Twitter, Facebook and Google+.