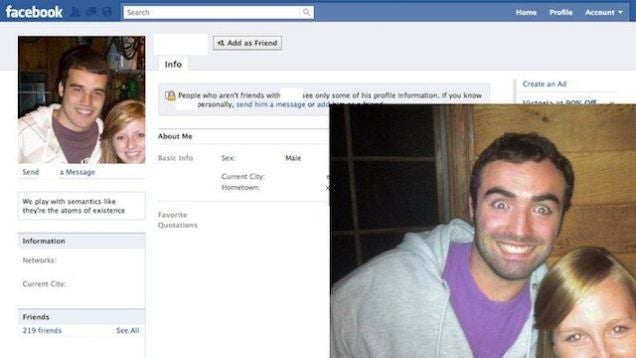 Social media is a weirdo’s playground. Never before in human history has it been so easy to act so creepy, without ever leaving your home. Whether it’s posting a photo of your face to a coworker’s Facebook wall or recreating a stranger’s profile picture, there are plenty of ways to behave like a little social deviant online.

Even stuff we do that doesn’t involve pranking anyone can veer hard into inappropriate digital skulking (raise your hand if you’ve stumbled upon the wedding website of a long-ago ex or almost accidentally faved your crush’s new girlfriend’s dog photos on Instagram).

Gizmodo’s golden creep-child Ashley Feinberg provided MANY solid examples of how to alienate others on Facebook earlier today. But I want more. If you’ve cornered the market on unsettling acquaintances in other pockets of the internet, or you’ve developed a borderline unhealthy habit of monitoring your ex-boyfriend’s ex-girlfriend’s new fiance’s LinkedIn, I must know.