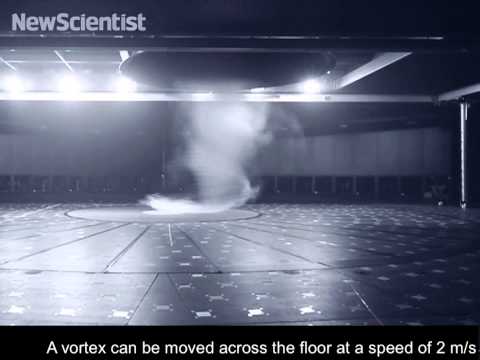 The WindEEE Research Institute, in Ontario, Canada, has this amazing wind chamber capable of creating a tornado vortex at the touch of a button. The tornado can go up to 5m wide and move at 2m per second.

The wind chamber is a hexagon 25 metres across. In the lower part of the chamber we have 60 fans on one wall and eight directional fans on each of the other five walls, and in the upper chamber are six huge fans. All are individually computer controlled.

Watch how their tornado is strong enough to rip of the roof of a miniature house:

A tornado is a combination of rotation and suction. By angling the airflow from the fans around the lower chamber we control the rotation of a tornado vortex, and we create the suction by running the six huge fans in reverse. The beauty of our tornado is that we can move it along the ground at 2 metres per second.