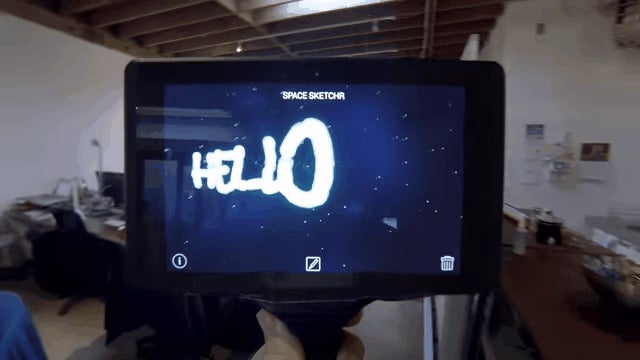 It’s been almost a year since we learned of Google’s experimental 3D-sensing tablet and phone technology, Project Tango. But now that Tango is in developers’ hands, we’re finally getting a look at what talented people can do with a radical technology.

When Google first announced Project Tango — which uses two computer vision processors, depth sensing and a motion-tracking camera to give a tablet the same capabilities as a 3D scanner — there were plenty of ways to imagine it being useful: Gaming. Shopping. Yes, advertising too.

But even then, it felt a little unimaginative. Luckily, since Google distributed a couple hundred tablets to independent developers, we’re getting some very creative and interesting demo apps.

Case in point: Space Sketchr, a demo app developed by Left Field Labs, a Venice, California-based studio. You can think of it as a standard drawing app — pick your colours, your pen, your patterns, and touch the tablet’s screen to make a mark. Simple. One caveat: You’re drawing as you move through space. Thanks to Tango’s ability to track how the tablet is moving through 3D space using its embedded motion-tracking camera, it can track where and when you draw a line in relationship to the tablet — recording those movements and turning them into a 3D drawing.

Take a look at the demo video above. The user can tap on the screen as they walk through a space, drawing a spiral circle that spans out through the room. Once it’s recorded, other users can explore the drawing using Tango. It’s an incredible cool glimpse as how something as simple as a sketching app can become a radical user experience when 3D sensing is involved.

As Left Hand points out, it’s really more of a sculpture, than anything. “Imagine a new kind of sculpture or drawing with a timeline in space,” they write. “A new dimension of applications is on the verge of being discovered. You can even get it in the Google Play store here, if you’re one of the lucky Tango few.