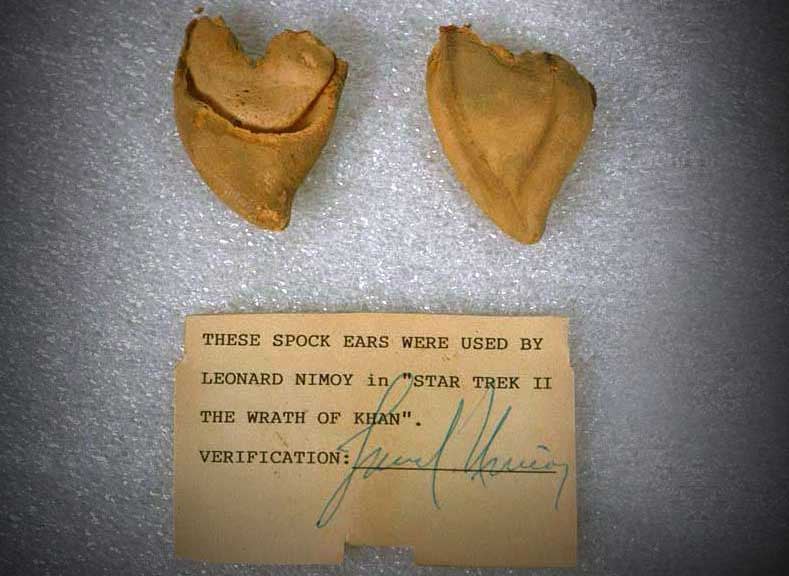 Margaret Weitekamp, the Smithsonian National Air and Space Museum’s curator of science fiction and space memorabilia, has some thoughts about why Leonard Nimoy and his Spock character were so universally loved. She also published this photo of the ears he used in the Star Trek classic The Wrath of Khan.

Paradoxically, it’s the humanity in the character of Spock, even when he was playing an alien, that really made him beloved by the fan community […] The character of Mr. Spock was originally intended to act as a foil to the original cast, providing a persona grounded fiercely in rationality and logic. But it was Nemoy’s depiction of Mr. Spock that made the character a true favourite of the “Star Trek” fan base — and an indispensable touchstone to the larger “Star Trek” franchise.

I think the character of Spock came back so many times because of the power of Nimoy’s depiction of him. It was very watchable but also very relatable,” Weitekamp says, adding that Nimoy managed to depict Mr. Spock with a great deal of humanity. The actor, she says, injected “humour and the empathy,” though he was “playing a very straight, rational, emotionless role.”

“That, coupled with his wonderful relationship that developed over time with the fans, really added to people’s reception of his performance,” she says.

Indeed. Funny how the death of someone who you don’t really now at a personal level can affect you so much. Human bonds work in mysterious ways. This really sucks.