The Most Common Numbers In 10 Million Passwords

The primary purpose of a password is to serve as an unique verification identifier for a given user. Ideally, the password for a given website or service should be both random and unique; if the letters and/or numbers in the password follow any patterns, then they might be easier to guess by an intruder. For example, someone may put their birth year such as "1987" or "1988" in their password, which makes the passwords easier to remember, but consequently easier to break.

A few weeks ago, security researcher Mark Burnett released a list of 10 million passwords compiled from various sources over the years. Reddit user jalgroy posted a histogram of the years used in these passwords, which I've verified using my own scripts: 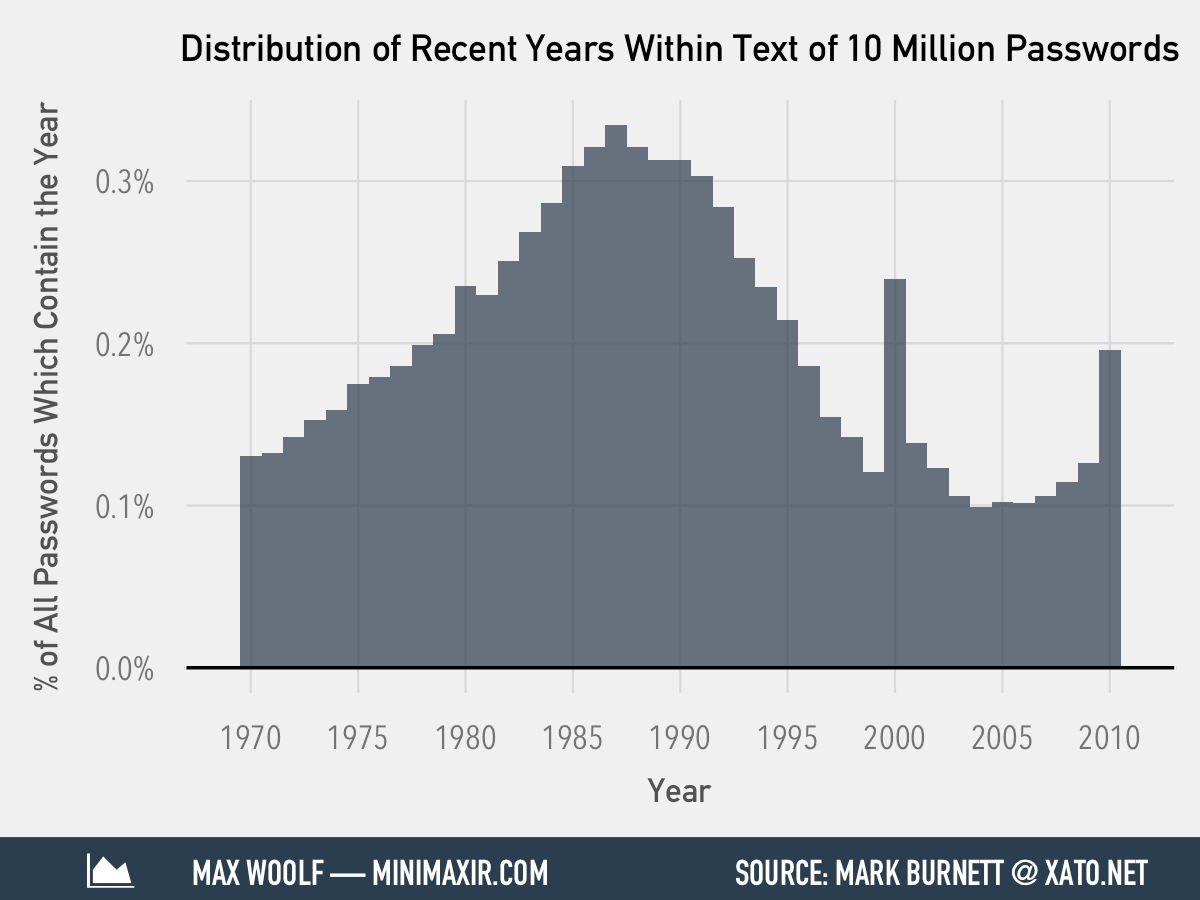 There is a clear maximum at 1987 which implies a current age of about 28. This makes sense, as internet users in their 20's are generally considered to be very attuned to internet usage. The spike at 2000 is likely not because it's a birth year, but because 2000 is a kewl number.

There are actually many similar patterns for numbers in passwords, which involve surprising yet intuitive logic.

The distribution of the number of digits in passwords varies significantly. 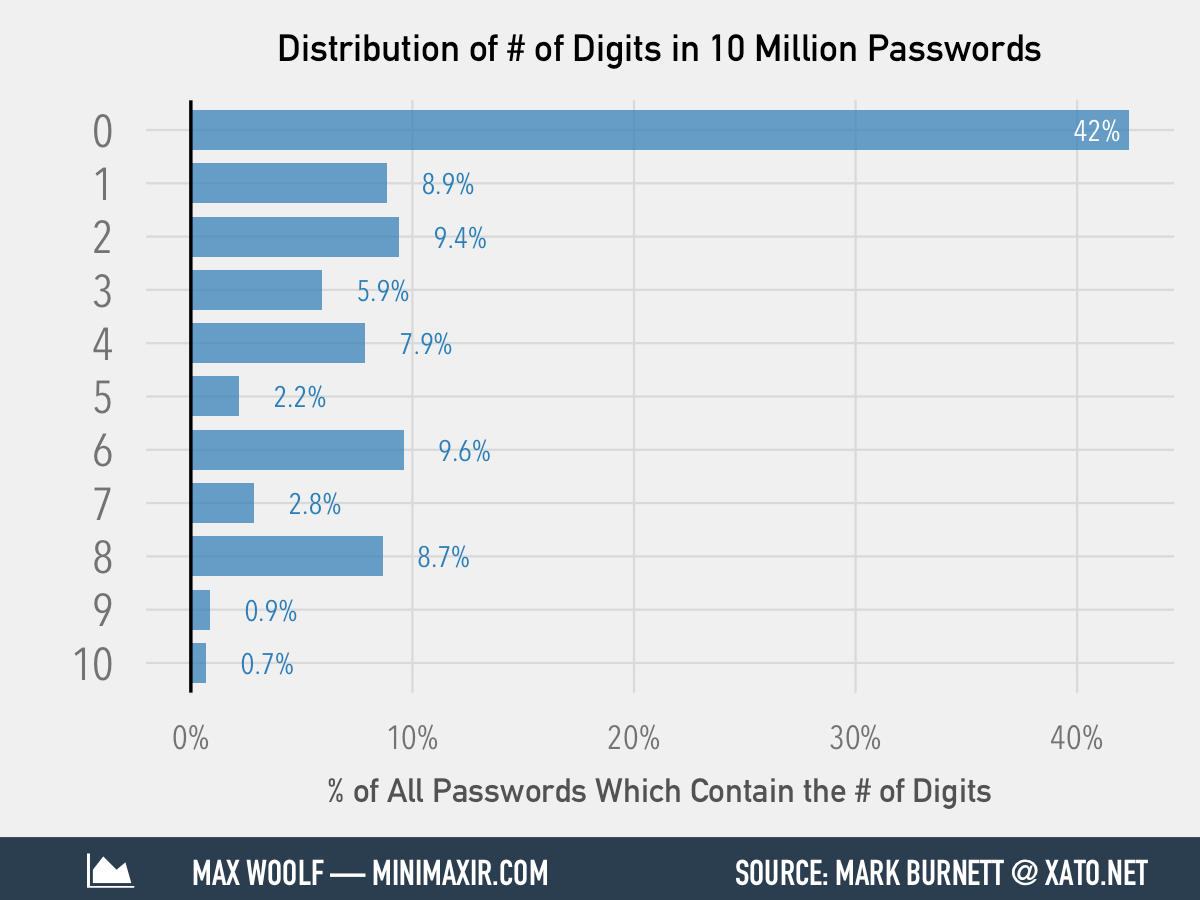 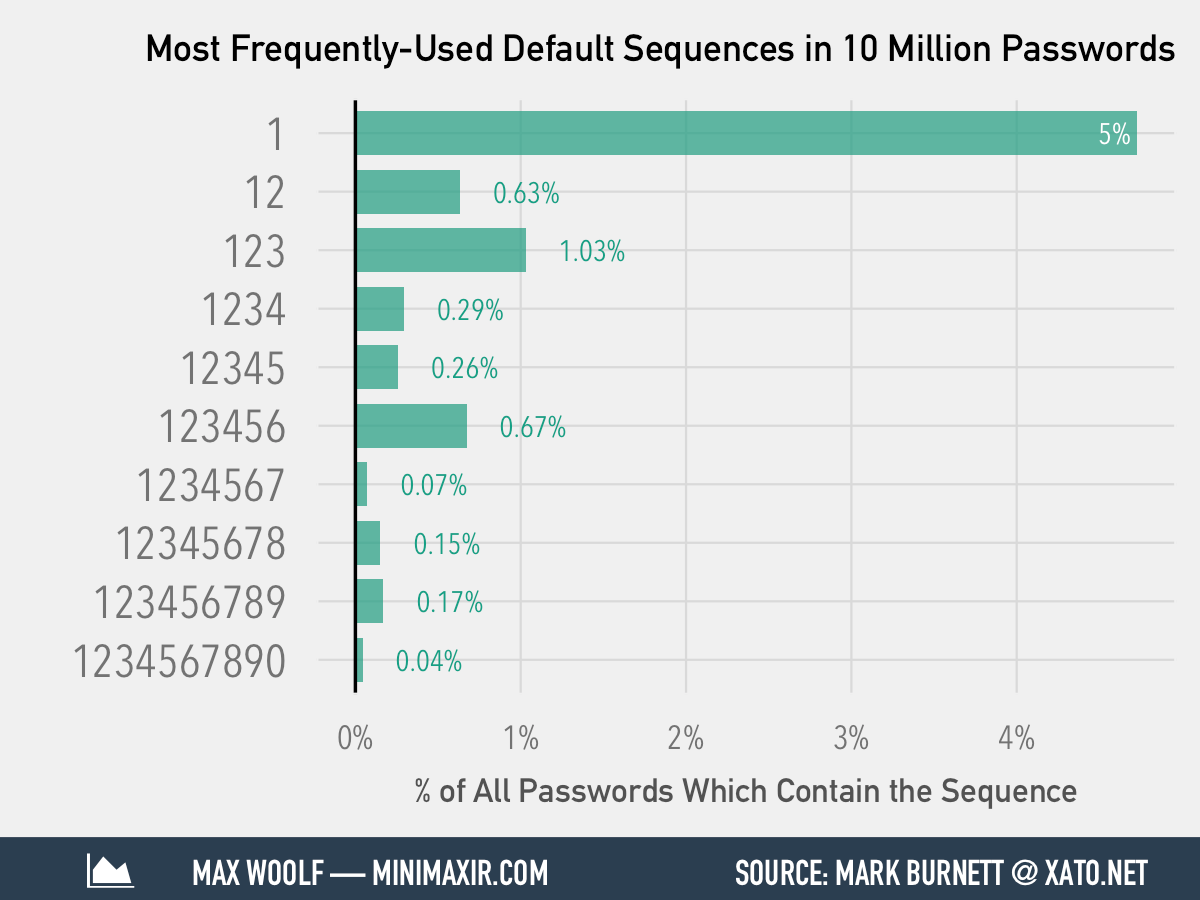 Note that the length of the sequence is uncorrelated with the number of occurrences of the sequence. Many more people use 123 in a password than just 12, even though it's longer. 123, as a triplet of numbers, may be easier to remember by the average person than a pair of numbers. However, that contradicts the logic above that even numbers may be easier to remember, which suggest that another factor may be involved.

Take a look at the most used single-digit numbers: 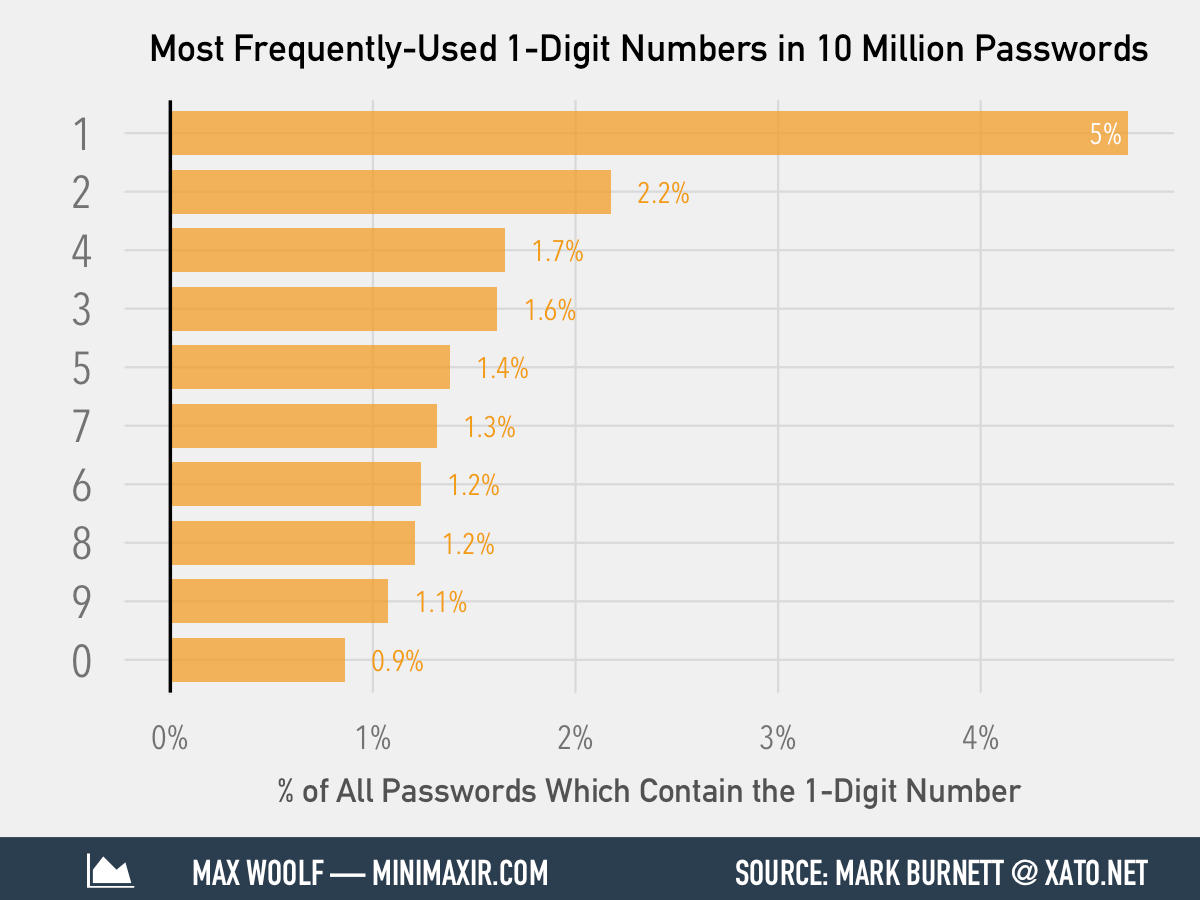 Let's look at the most-used 2-digit patterns, including numbers with 0 as a leading digit: 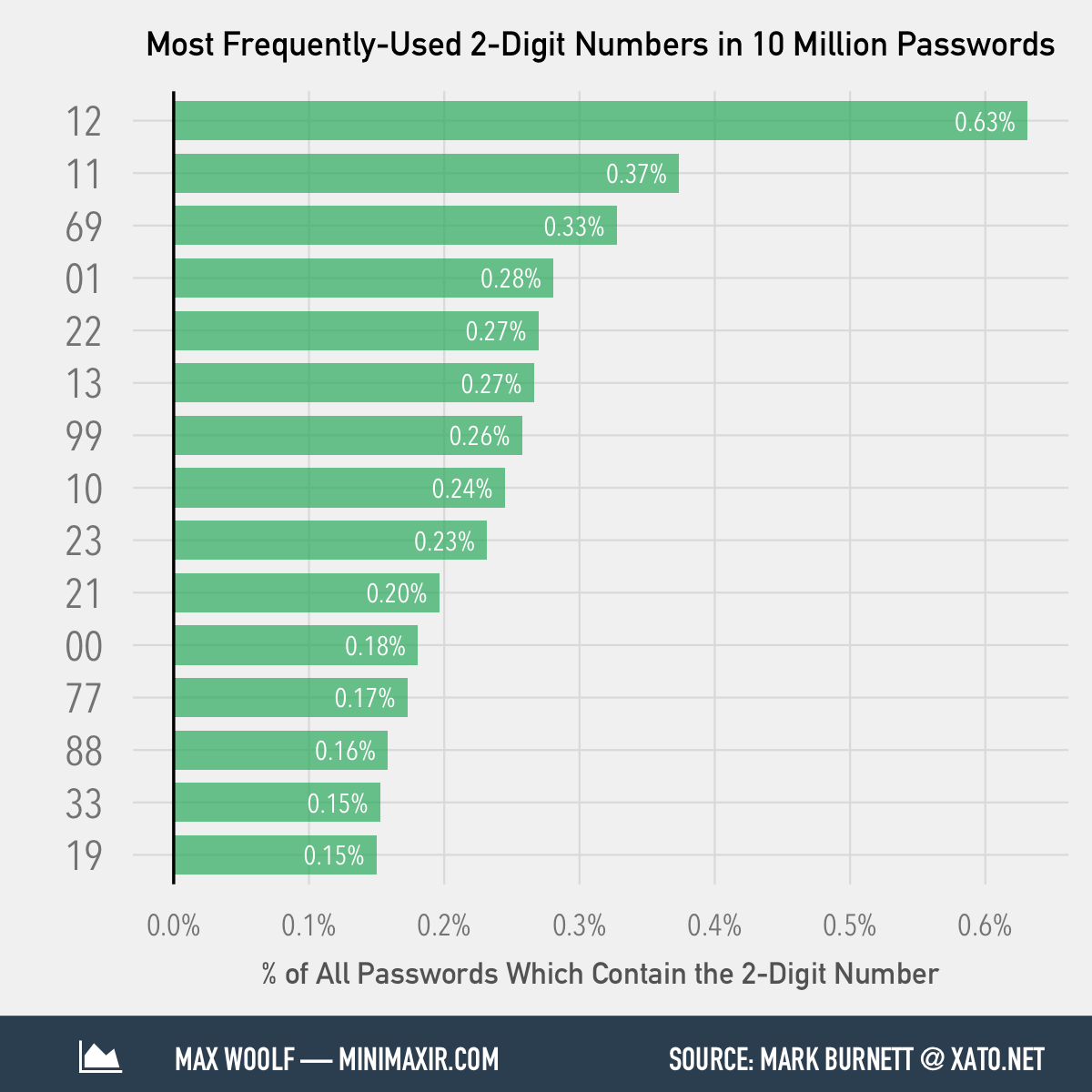 12 and 11, a sequential pattern and a repeating pattern respectively, are by far the most-used 2-digit numbers. Many repeating patterns such as 22 and 99 are prominent. But why is 69 in third place? (besides the obvious non-family-friendly reason)

It may be helpful to look at a heat map of all possible 2-digit numbers to see if there are any observable patterns. 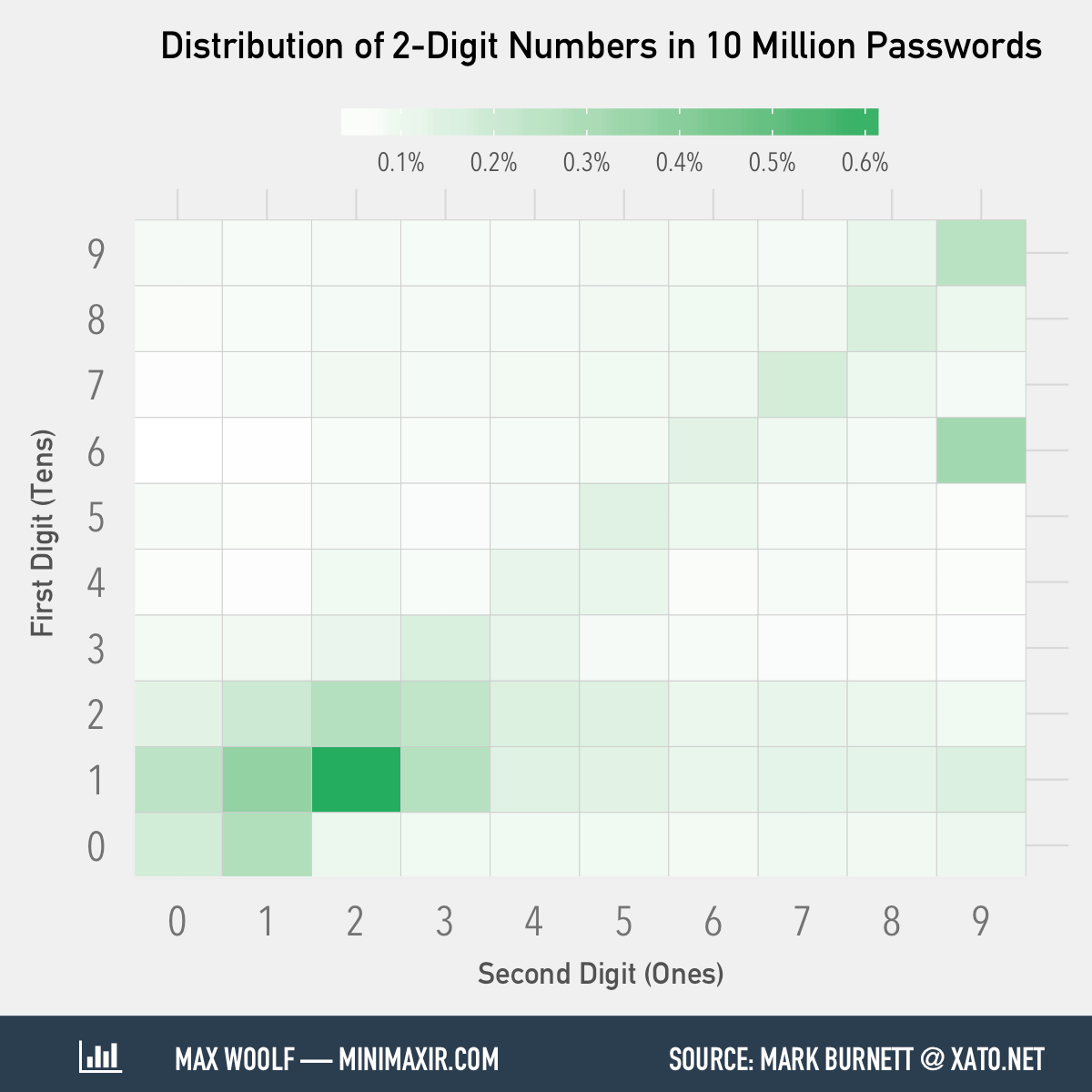 Almost all 2-digit numbers outside of those patterns are unused (the exception is 69, of course) The intersection of both of these patterns is at 11/12, which is the reason both have high usage. 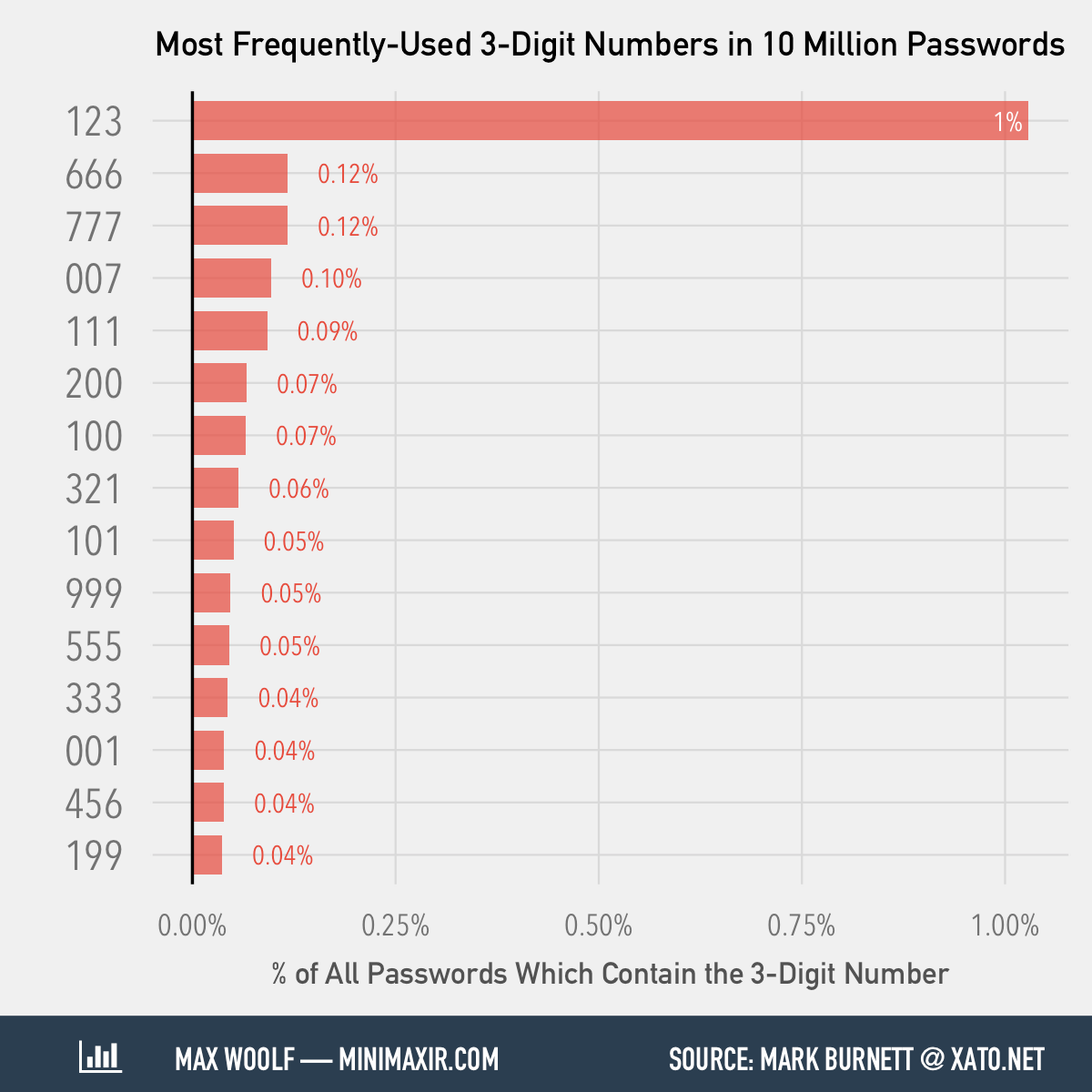 Yes and no. Here, there appear to be more instances of special numbers, such as 321 and 007 which deviate from the patterns above. Of note, 3-digit numbers ending in 00 appears as a new pattern.

This can be confirmed by looking at a faceted heat map for each possible combination. 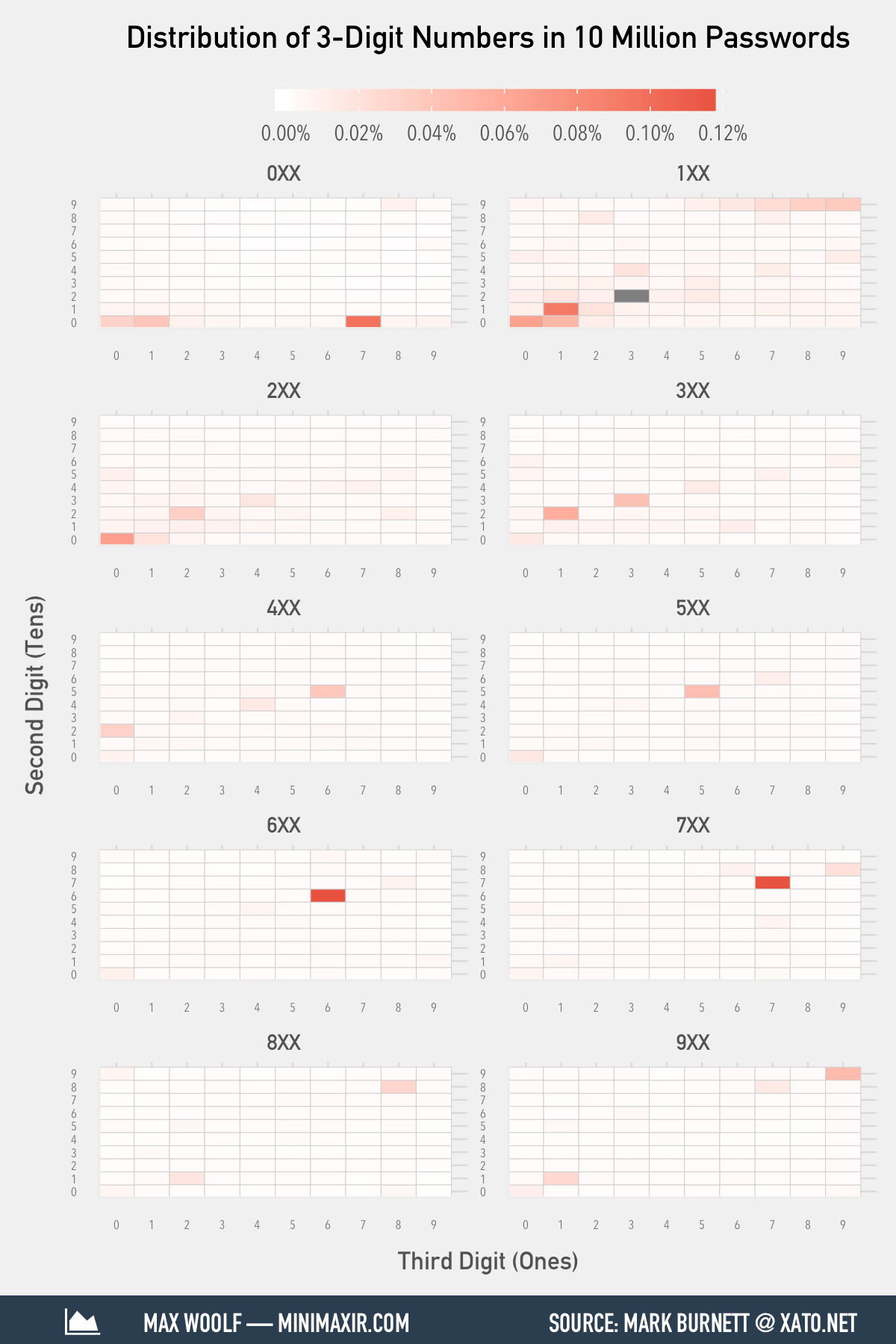 The patterns of numbers in passwords can offer some insight to human psychology. However, if possible, I recommend you avoid using such patterns in your passwords since it introduces a vulnerability. It's a good idea to use a password manager instead, such as 1Password or KeePass, which offer advantages including the generation of both truly random and unique passwords.

This post originally appeared on Minimaxir.com. The author, Max Woolf, is a Carnegie Mellon alum who currently works as a Software QA Engineer in the San Francisco Bay Area for over 2 years. Follow him on Twitter and find him Facebook.

All charts were made using R and ggplot2.

You can download the aggregate data used to create the charts in this Google Sheet.