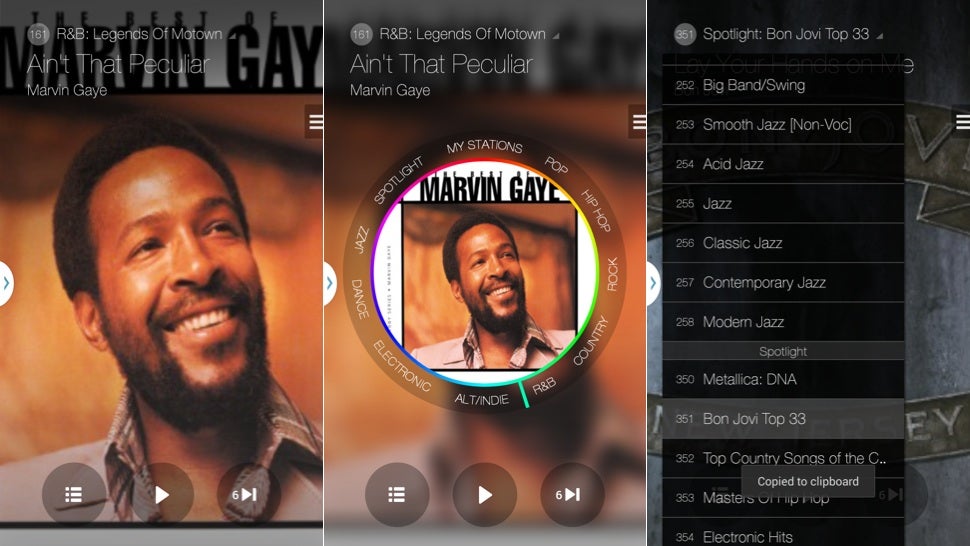 Tired of spending cash on your streaming service? Have yourself a shiny Samsung phone? Good news: your days of paying for an awesome radio service are over. Samsung’s Milk Music platform launches in Australia today.

The new streaming service is powered by Slacker’s excellent, human-curated catalogue and back end. It’s station based radio that learns like any other. What sets it apart is the slick interface that Samsung built.

The interface is centred around a big circle dial. Genres are grouped into big categories like “dance” and “alt” or “indie,” and within each of those categories there are sub-genres like “house” or “indie sleepover.” Working your finger around the outside of the dial cycles through the broader categories, swiping navigates through the more specific categories. You an also navigate through the categories from a drop-down menu in which the 150 odd stations are numbered like a Chinese food menu.

Besides the built in curation, Milk Music personalises to your taste by the same mechanics as Slacker. You can favourite/ban songs and also tailor stations with three sliders so that you can fine-tune whether they play popular songs or the deep cuts.

The nicest part about the interface is that browsing through different stations works like surfing the airwaves in your car. You hear the things as you’re surfing by them, which theoretically improves the likelihood that you’ll end up listening to something you usually don’t. In the short time I’ve had to play with Milk ahead of the announcement this morning, I already ended up listening to War in the R&B channel when I was on my way to my goto, which would probably be more like punk or 90’s alternative.

Don’t underestimate how important interface is on virtually identical services. When I’ve reviewed them in the past, I’ve found it to be the most important consideration, and indeed, when it comes to Slacker Radio it’s one of the biggest pitfalls. Slacker is a mess — Samsung basically took their technology and cleaned it up.

Milk isn’t the most robust service out there — it lacks on-demand like Spotify or Beats Music. But as Pandora’ massive user base plainly shows, a lot of what people want is just radio. The price tag is important here basically because there isn’t one. Streaming music services have so far proved unlucrative with everybody from Spotify to Pandora to Beats Music’s predecessor Mog bleeding hundreds of millions and even billions of dollars with no profit in sight. That Samsung is treating music as added value for people willing to invest in its hardware is a smart move, and you can expect to see more service bundling like this in the future.

Here are the devices it works on for Australia:

You can get it from the Play Store or GALAXY Apps store starting today.