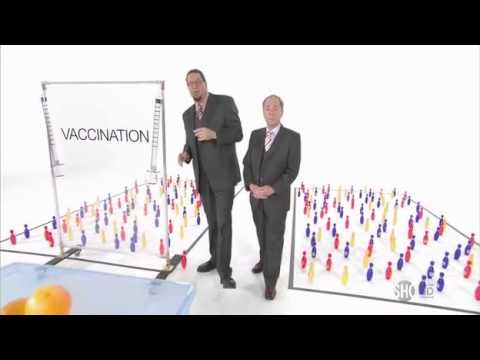 The theory that forms the backbone of the anti-vaccination movement is that vaccines can cause autism. A 1998 study published in a medical journal “found” a link between vaccines and autism, saying that 1-in-100 children were at risk. The journal later retracted that information after it was found to have been falsified. The author of the study was reportedly set to benefit from lawsuits that relied on his data, but the damage was already done: the “anti-vaxxer” movement was in full swing.

In Penn and Teller’s 2010 show Bullshit! the pair debunk myths that seem to weave their way in and out of mainstream thinking. The above clip sees them take the theory of anti-vaccination, and say that even if vaccinations do cause autism in 1-in-100 kids (which they obviously don’t), vaccination is still necessary to protect kids from a whole bunch of other awful things that modern medicine cured ages ago.

Please. Don’t be an idiot. Vaccinate your kids.