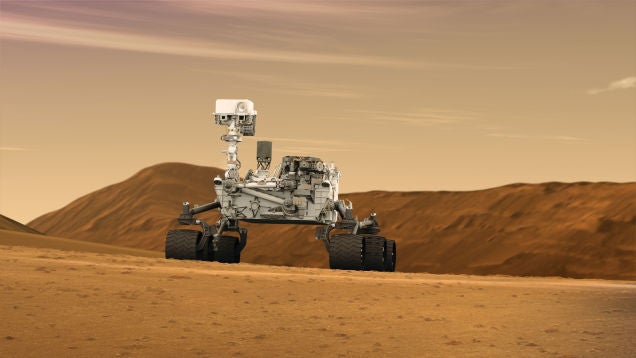 When Curiosity goes looking for organic molecules in Mars’s solid surface, it vapourises a rock sample and sniffs the gas that comes out. The plan could be going awry thanks to a pesky little mineral called jarosite.

Jarosite releases an oxygen atom when it is heated up. Oxygen is very reactive, so it goes looking for other molecules to bind to. In that process, oxygen can react with organic molecules and split them before our instruments can detect their presence, and any evidence is gone a split second before we can tell if it’s even there.

Lewis removed layers of rock rich in both jarosite and organics from cliff faces on the island and brought them back to the lab to grind them into powder and heat them. He heated the powder from 400 to 1000°C in 100°C increments, to find out which compounds appeared at each temperature. This is similar to the technique used in Curiosity’s SAM (Sample Analysis at Mars) instrument.

That’s the bad news. The good news is that jarosite isn’t abundant everywhere on Mars’s surface, and some forms may not release oxygen until higher temperatures than the rover uses. It could also be possible, with some additional detective work, to piece together the original molecules based on their by-products. That, and Curiosity has another instrument for detecting organic molecules in the air rather than in rocks, which found methane bursts in Mars’s atmosphere last year.

Curiosity’s search for organic molecules in Mars’s rocks could be ironically destroying the very molecules its looking for, but the little rover and its human scientists do have some other tricks up their sleeves. Hopefully those tricks don’t have any secret, self-defeating caveats. [New Scientist, Astrobiology]