Fitbit Surge Review: If Only This Was Actually A Smartwatch 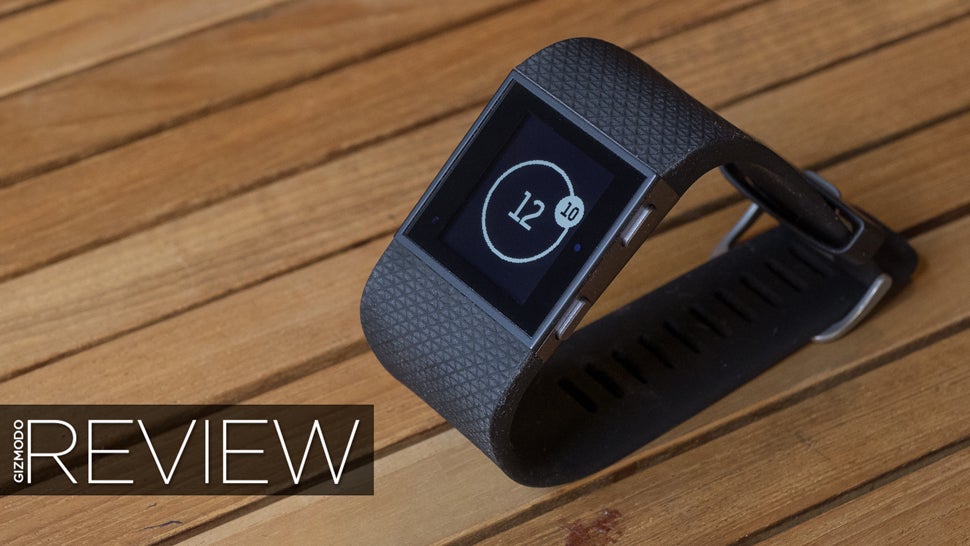 I have a dream, a dream about the perfect piece of wearable tech. It would be a band with all the simple notification powers of the best smartwatches and all the health tracking powers of a full-on fitness tracker. The Fitbit Surge is so close that it hurts.

The most premium tracker in Fitbit's trio of new fitness trackers, with more features than the Charge and the Charge HR. But not many more. The Fitbit Surge is basically the Charge HR, but with a bigger screen, text message notifications, and dedicated GPS on top. Oh, and it costs an additional $150.

I'll touch on the basic features of the Surge — like heart-rate tracking, step counting, and such — but for a more in-depth look, you can (and should) go read this review of the Charge HR by my buddy Brent Rose first. It is probably the one you should buy anyhow. I'll spend most of my time focusing on what makes the Surge different, which is mainly how it works as a (super-duper rudimentary) smartwatch, and how it can track runs without a phone in your pocket.

Unlike the old (recalled) Fitbit Force and the new Fitbit Charge and Charge HR, the Fitbit Surge has a full-fledged square screen instead of the iconic little strip on its cousins. The body is a mostly unremarkable grey plastic, flanked by a black rubber band. It looks like one of the smaller Fitbits grew up into a smartwatch, in other words. (If only that were true.) 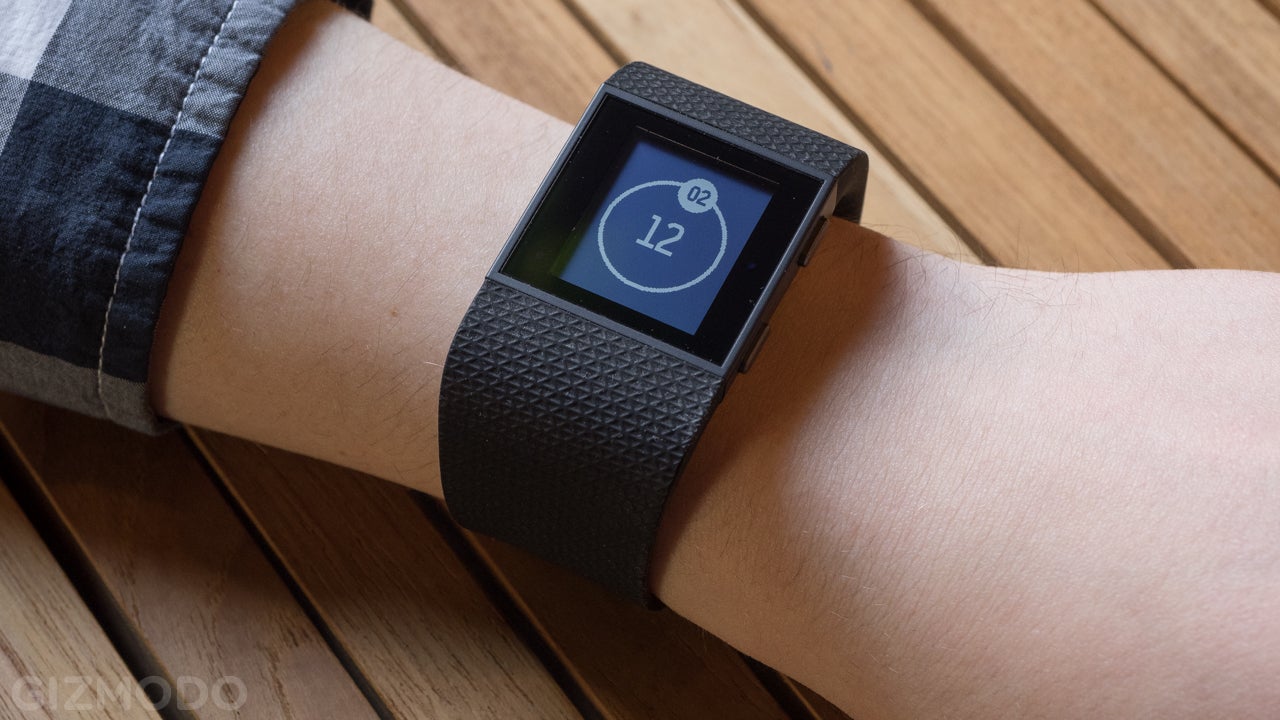 The Surge's face is a monochrome LCD touchscreen, sort of like if you took a Pebble and made it touch-sensitive. And while you'll swipe around for most things — from the watchface to your current heart rate to your current step count — it also has buttons. There's one on the right that basically switches the Surge from output mode — "I wanna see my stats" — to input mode — "I wanna start tracking an exercise" — and back. There are two more on the right which mostly get used for starting and stopping timers, and for pulling up recent notifications if you have any.

On the inside is where you'll find the Surge's always-on heart-rate monitor: a small camera flanked by two green LEDs that do a little flashy freakout for a sec every time you take the thing off. They're mounted on a smooth little bump so they can easily maintain skin contact without having you tighten the strap like a tourniquet. Seems to work! The Fitbit Surge is plenty comfortable, even if the rubber strap can occasionally feel a little suffocating as pretty much all rubber straps do. 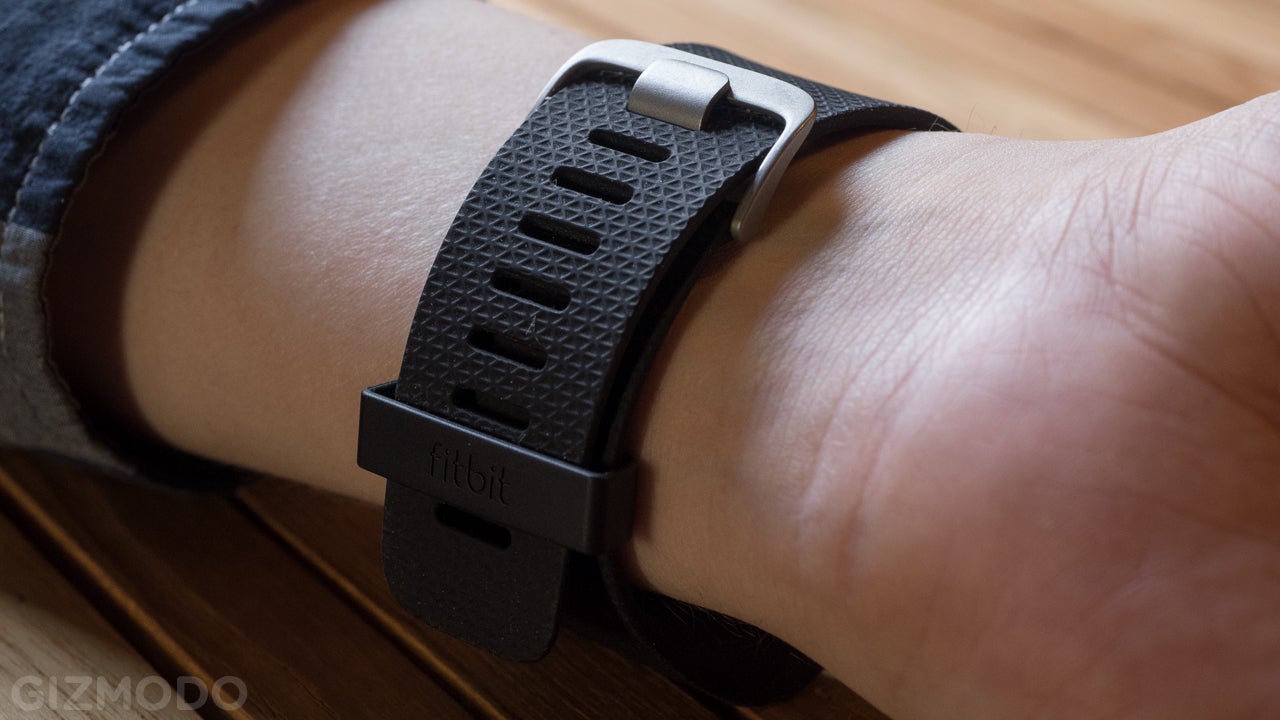 As a fitness tracker — which is to say the part where it is basically just a Charge HR — the Surge is a damn dream. Setup is as simple as signing into the app and pairing with your phone via Bluetooth. Pretty much everything from that point on is automatic. The Surge — like the Charge HR — tracks your heartbeat all the time, as well as tracking your steps, the number of flights of stairs you've walked up, distance walked, and an approximation of your calories burned (based on some data you give the app about your weight and height and sex and age and hopes and dreams and deepest darkest secret and whatnot). Also like the Charge HR, the Surge does sleep-tracking and does it automatically; you don't have to do a thing besides learn how to sleep with a watch on.

I did some rudimentary testing to see if the Surge's heart-rate tracker and pedometer features are as accurate as the Charge HR. Sure seems so! We're talking discrepancies of roughly a beat or two per minute and maybe 5-10 steps every thousand. 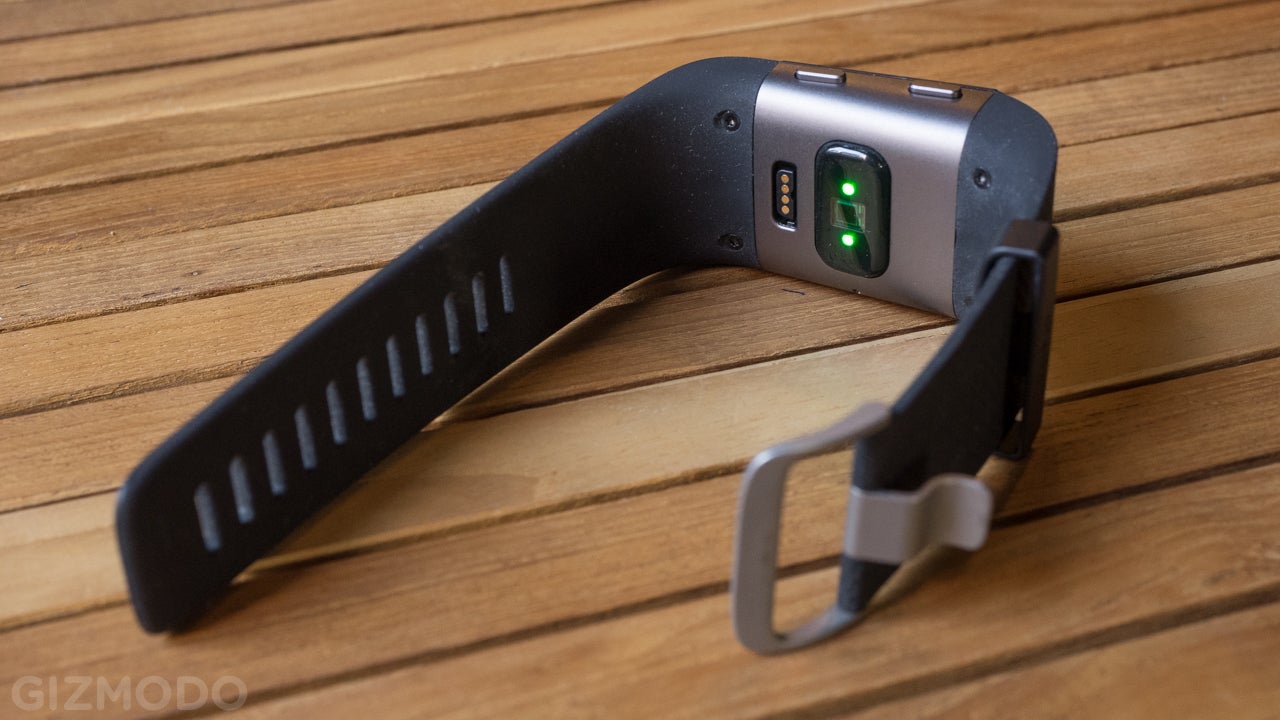 I did have a few periodic issues with the heart-rate tracking, though. When I did a rare bout of actual exercising in my living room (Dance Central Spotlight!), the watch occasionally lost track of my heart-rate when I was up in the 140 BPM range. Not sure if it has anything to do with getting into the high heart-rate area, or with me swinging around my arms like an idiot — which Fitbit warns against. My heart-rate always came back after a few seconds, but it was momentarily annoying to look down and check my BPM only to see it wasn't there. When perusing my health data, I also found an inexplicable 137 BPM spike at 1:30 AM on a Monday night when I was in bed, and since I don't remember having a nightmare or a heart attack, I have to assume it was a fluke.

The Fitbit app, as Brent mentions, has catapulted itself into the lead when it comes to coherently and simply showing you all the health data you've been collecting. The app's default screen is just this glorious dashboard of data that's totally clear and easily accessible. It's great. 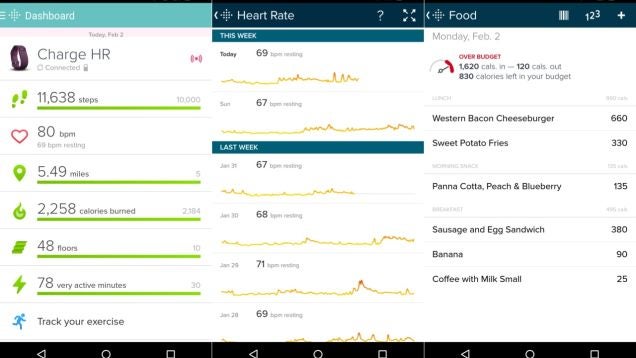 That's all stuff that the ($150 cheaper) Charge HR does. Sure, the Surge does it all equally well. But what about the bonuses?

Well, if you are expecting the Surge to serve as a smartwatch of any stripe, stop it. (Stop it right now.) The Surge can send call notifications and SMS notifications to your phone, and... that's it. Let me repeat that: If you pair your phone with the Surge over Bluetooth, the only thing you get that you can't get with the Charge HR are copies of your incoming text messages. The main thing those notifications notified me of was that man, I hardly ever text with anyone. If the Surge offered email notifications, maybe I'd be intrigued. Maybe.

But as is, you can look at your last (and only your last) incoming text or call notification, it's annoying to get to, and it takes up the whole screen: 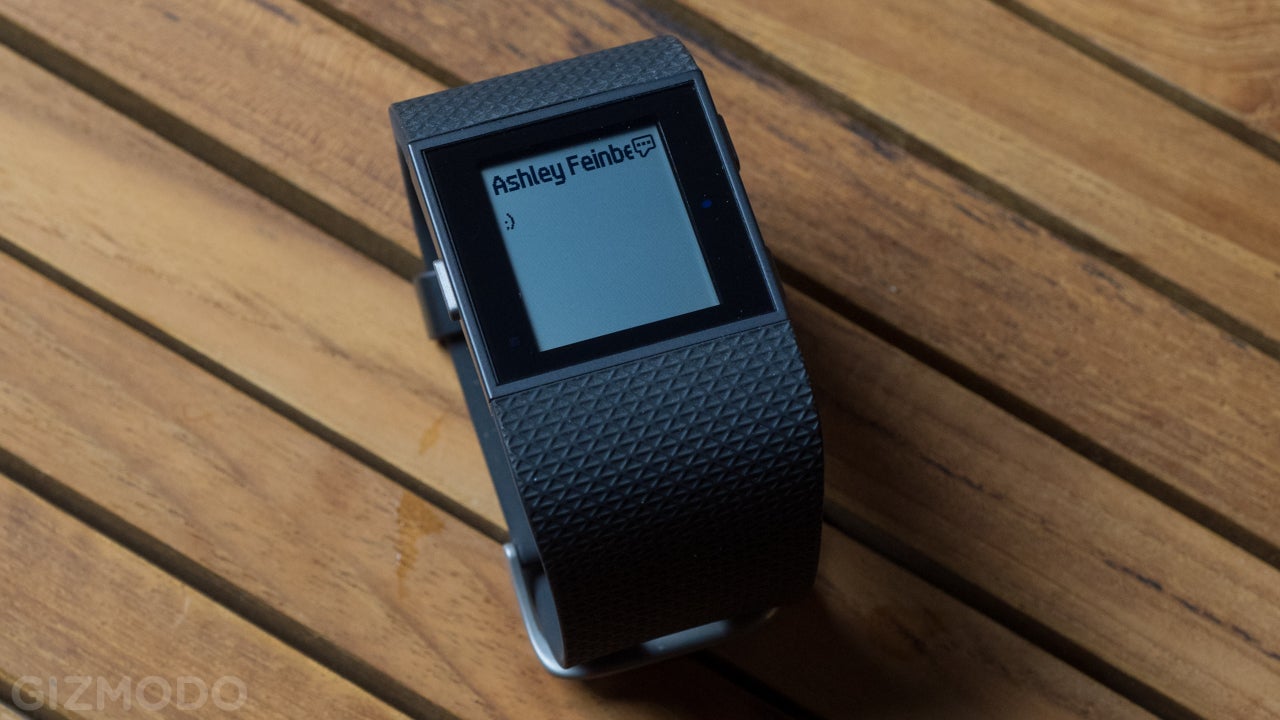 Of course there's the possibility that Fitbit will update the Surge with more powers later, but for now it feels pretty dumb. Particularly 'cause the Basis Peak (our current pick for best overall fitness tracker) just got updated with full notification support — mirroring just about anything that pops up on your phone.

The Surge's big touchscreen does make it more convenient to use as a watch — more room on a big screen for the time, and like a Pebble, you can select from a few different watchface options using the companion app. The touchscreen controls are kind of weird in combination with the buttons. Pressing the button on the right, for instance, switches the watch between a mode where you can see the time verses one where you can start timed activity tracking. This switch has an animation that looks just like a vertical screen-swipe, but a vertical screen swipe actually does nothing; you have to use the button. Meanwhile, you have to swipe to the left or right to switch between the options in either mode. It's a bit of a weird mishmash. 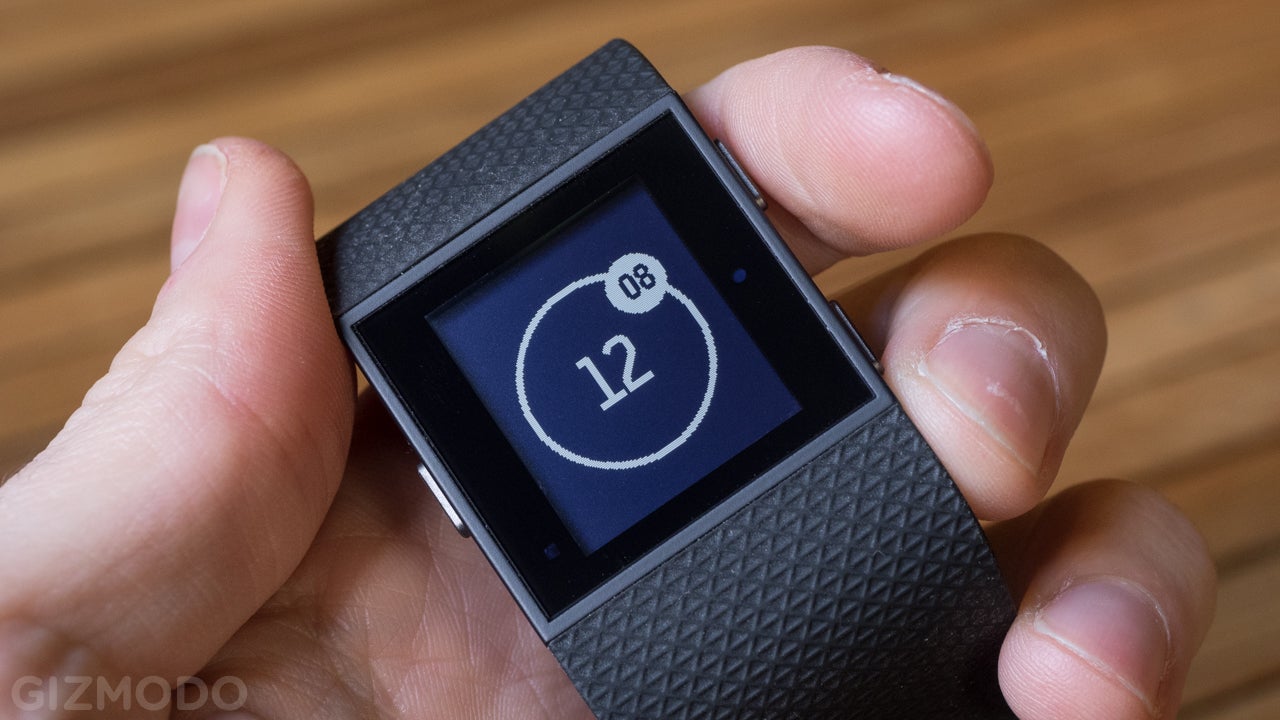 Also moderately annoying is how easy it is to swipe the screen by accident, especially when you're sleeping with the thing on. I've turned my wrist to check the time in the wee hours of the morning, only to find my watch gleefully displaying the number of flights of stairs I walked the previous day. This happened four times in as many nights. It'd be nice if those alternate views timed out and went back to displaying the time after a minute or ten, but nope.

The big bonus you get out of that big fat touchscreen is the option to initiate all kinds of different exercise options right from the watch. You can load up to seven shortcuts onto the watch — things like hiking or yoga or kick-boxing or tennis or martial arts. Each one of these will automatically initiate a stopwatch-like bout of heart-rate tracking, and also the GPS if it makes sense (yes, for hiking, no for yoga). Most of the time, it doesn't change the way the Surge actually tracks your activity — yoga, tennis, martial arts and many more only use heart-rate — but at least when you go back to the app you'll be able to remember what you were doing when your ticker hit its stride. 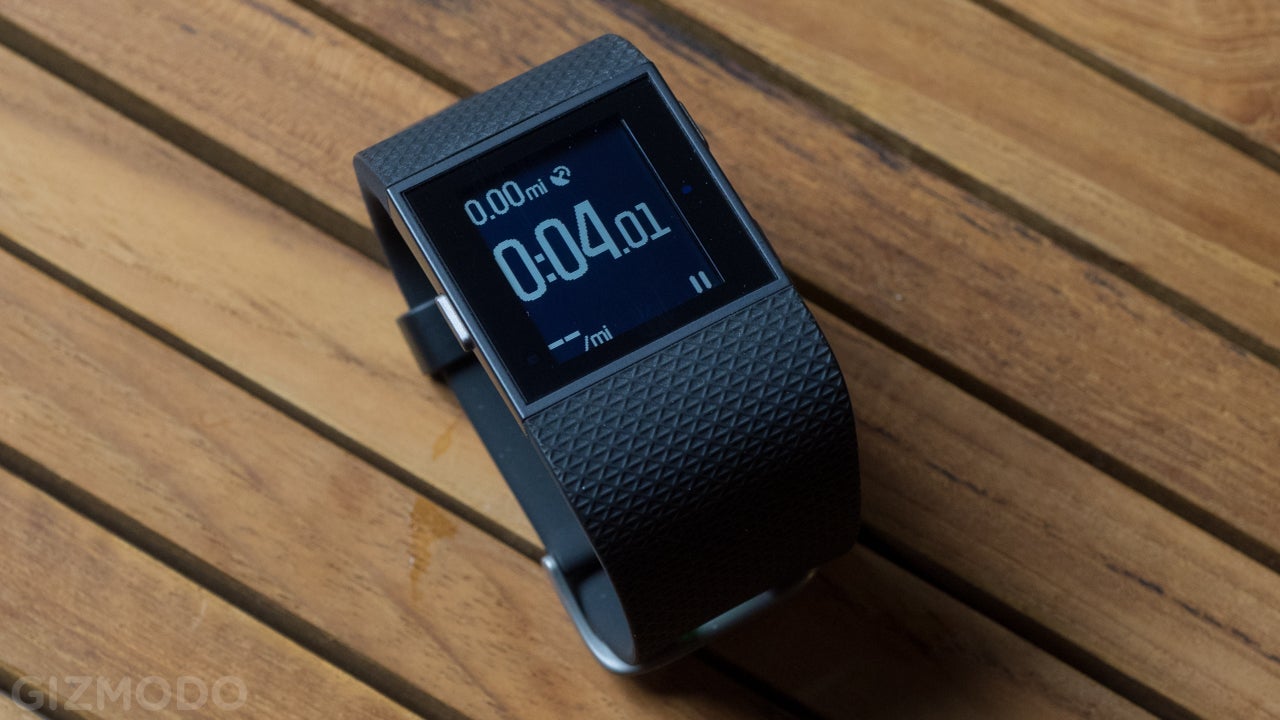 When you use the GPS, the Surge can take a little time to lock-on to a satellite. I took a stroll through Manhattan (and lied to my wrist about it being a "run") and it took a solid 5 minutes before the GPS locked in. Out in the boonies, though (read: Queens) lock-on was almost instant. In the event it's taking forever, there's an option to just bypass the waiting game and get your workout started before GPS locks on, and if you do that you'll get the heart-rate and distance for your run (or stroll) in full, but the course won't be mapped until the GPS locks on and the Surge vibrates to let you know it's all ready. 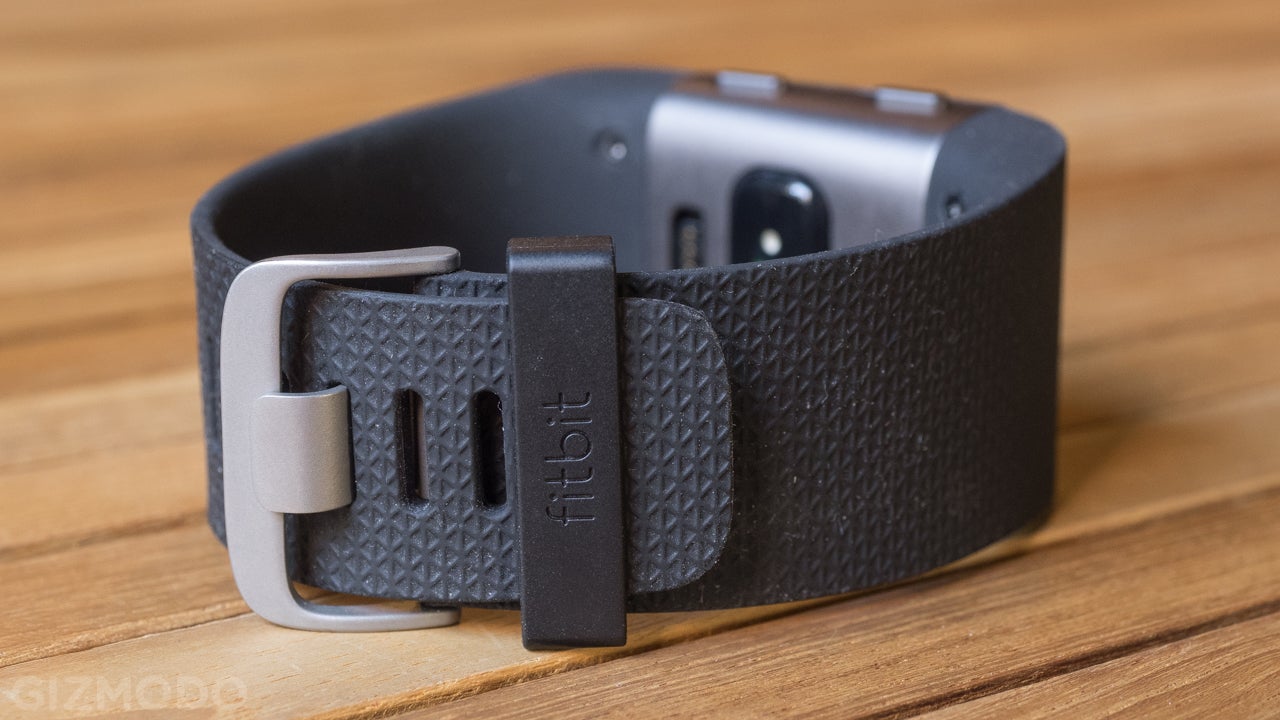 The Surge is a great fitness tracker and dumb simple. I just slapped it on and synced it up and BOOM instant life stats. The app is fantastic at sharing the info with you.

Battery life seems great; haven't had long enough (i.e. an uninterrupted week) to do a full-to-empty test yet, but I'll update when I have. So far though, I got four whole days out of a half charge and over 24 hours of tracking after the first warning of "low battery." 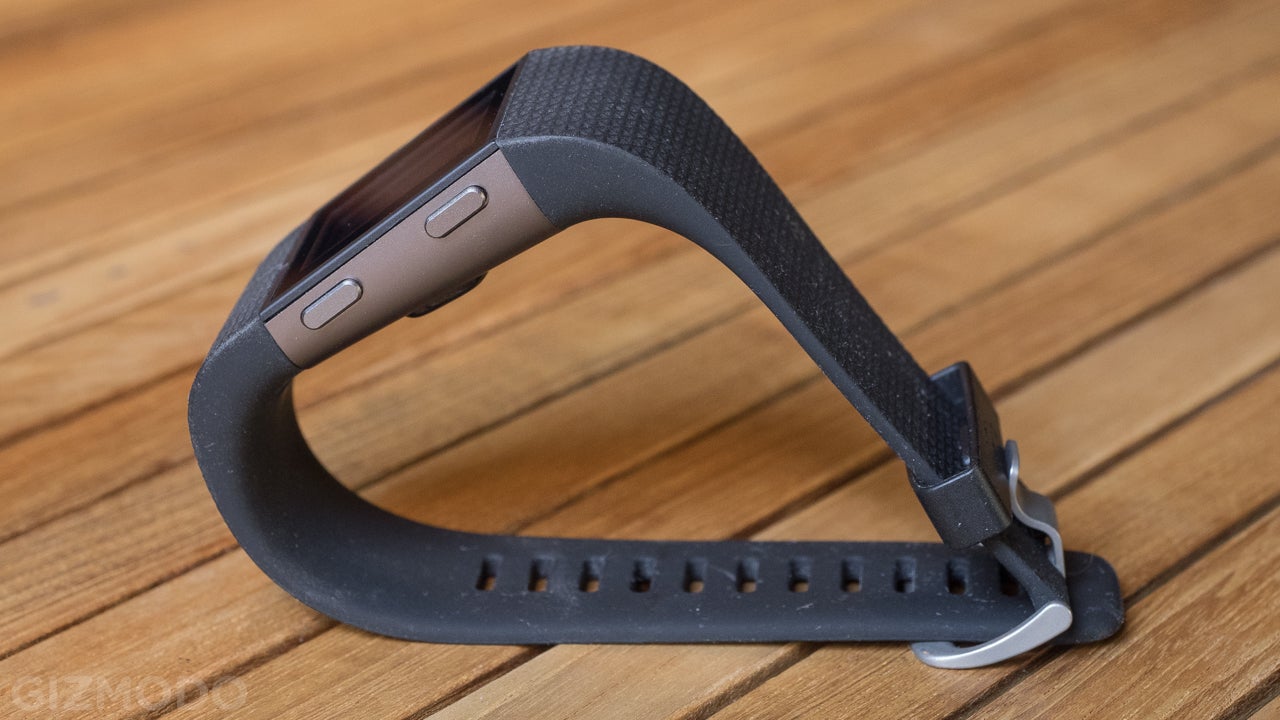 The Surge is prone to accidental swipes (especially during sleep) and never defaults back to the time until you do it yourself; I hate when my watch-type accessory fails to meet the most basic criteria of a watch.

The Surge is water-resistant but not shower or swim-proof. Hmm.

It makes me realise that all I really want is a Pebble plus a Fitbit, and while the Surge seems like it could have been that in some alternate universe, it is not actually that thing. 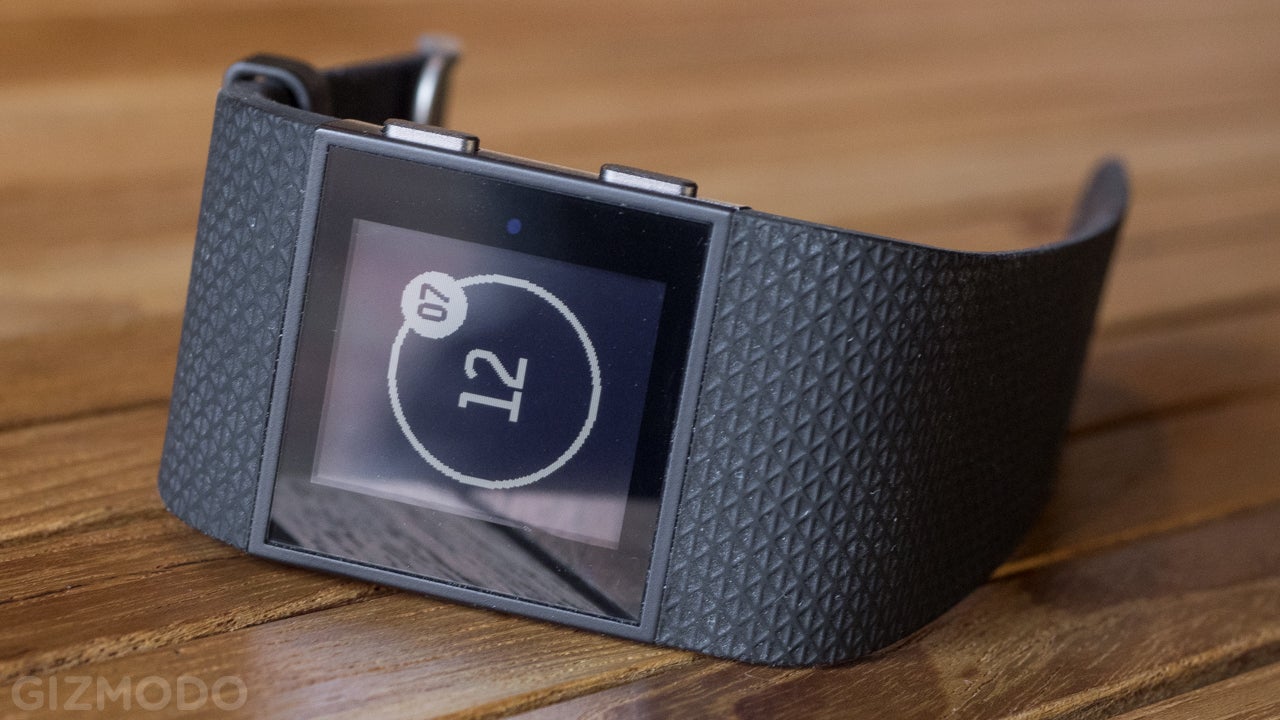 Is running without your phone but still having GPS track your course of the utmost importance to you? The Surge is a great fitness tracker, but it's also $US100 more than the Charge HR, and unless you have that very specific need, it is not $US100 better.

The SMS notifications are nice or whatever, but they're hardly enough to move the needle. Even if Fitbit updates the Surge with more notification powers in the future, it's going to need a huge overhaul before the interface — which is fine when you're just getting texts — can handle more (and more diverse) notifications.

The dream of a Fitbit Surge that is actually just a Pebble but with bad-arse fitness additions is tantalising. The Fitbit Surge (which isn't that) whets my appetite for it more than ever. The Basis Peak — our current pick for best overall fitness tracker which is also only $US200 — might be; it just got updated with notifications and we're currently checking that out. If wrist notifications aren't your bag and you aren't some sort of phone-free running junkie, the Fitbit Charge HR is just as good and cheaper than the Fitbit Surge, and you should get that one instead.