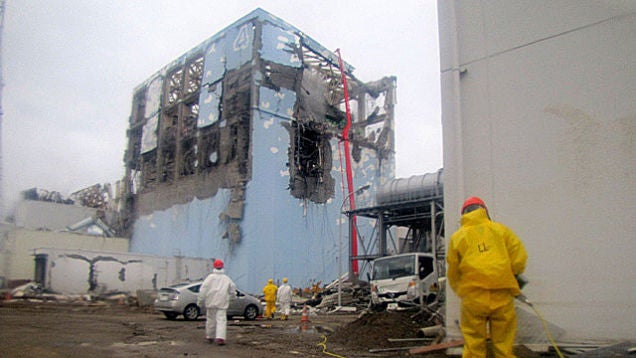 Fukushima is Japan's radiation nightmare that just won't go away. Ever since March 2011, the damaged plant has been riddled with leaks and cleanup setbacks. Now Tepco, the operator of the damaged facility, says they have recorded spikes between 50-70 times above average readings in the gutters that pour water into a nearby bay.

Tepco detected the readings at about 10am local time. The Japan Times has more of the finer details and eye-popping numbers behind this new leak:

The levels of beta ray-emitting substances, such as strontium-90, measured 5,050 to 7,230 becquerels per litre of water between 10:20 a.m. and 10:50 a.m. Tepco requires radioactivity levels of groundwater at the plant discharged into the sea to remain below 5 becquerels.

Officials say they have shut the gutter so contaminated water won't leak into the Pacific Ocean as they continue monitoring the situation. Later in the day, the leak continued but fell dramatically to only 10 to 20 times regular readings. AFP reports that this new problem joins a litany of other leaks (seriously, it's been a bunch) as Japan and Tepco continue to struggle with decommissioning the damaged plant.

Not all hope is lost. The International Atomic Energy Agency recently gave Tepco a thumbs up for its clean up efforts just four days ago, but clearly some vulnerabilities remain. [AFP]