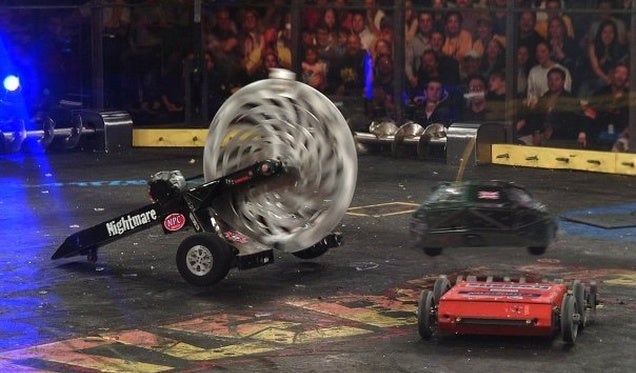 BattleBots is coming back to US television. This winter, homemade robots will battle to the death on television, just as Asimov intended. They will be faster and stronger than ever before. Which makes sense, because the last time BattleBots was on television was over a decade ago. Imagine what they could do now.

According to Deadline, the American Broadcasting Company will produce six episodes of the show this winter. That might not sound like a lot, but I’m honestly pretty pumped.

I didn’t have much TV access growing up, but BattleBots was a formative part of my existence anyhow. When I built my own Nerf sentry gun out of Lego Mindstorms, or played my favourite boardgame RoboRally, I was imagining the destructive forces I could unleash if only I had some real robot parts at my disposal. Disney’s Big Hero 6 brought all those memories flooding back when I saw it at the cinema a few months ago. But those Disney robots weren’t real like the BattleBots were.

My big question is whether now — over a decade later — the incredible state of modern technology will make BattleBots exciting once more. As Popular Science points out, it got a bit boring when competitors realised that wedge-shaped robots could flip opponents on their backs to win many duels. They couldn’t easily right themselves once they were tipped over! But in this, the age of self-driving cars and drone swarms, I can’t imagine they will have trouble finding technology for an amazing new show.

Think about it: 3D printers. Open hardware platforms. Maker culture on the rise. I bet you could build a killer robot all on your own.

And it’s worth noting that BattleBots production company Whalerock Industries also pays the bills at Tested, where our friends Adam and Jamie of Mythbusters fame (and other smart folks) play with hot new tech all the time. Did you know Jamie and Adam used to compete on BattleBots? You do now. Though it looks like Adam, at least, has given up the ring:

Here’s to inspiring another generation to embrace deadly robots. And here’s some light reading while you wait: an oral history of the rise and fall of the original BattleBots show. [Deadline]