A Smartphone Dongle That Will Tell You If You Have STDs 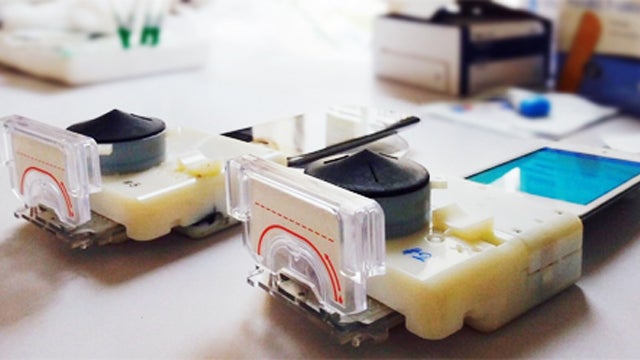 After the hoverboard, there are few sci-fi inventions more worked-on than Star Trek’s tricorder. Portable, simple diagnostic machines have been promised for years — there’s even a $US7 million prize for building one — but most designs are still years away from reality.

While this particular smartphone dongle certainly isn’t a tricorder — it can only diagnose three conditions — it does at least exist outside of a lab. The dongle, designed by a team from Columbia Engineering, has already spent time with healthcare workers in Rwanda. The device can detect HIV or syphilis antibodies, using a process called immunoassay.

Healthcare workers just have to prick the finger of the patient, load the blood into a microfluidic cassette, then load the cassette into the dongle and wait 15 minutes. The entire process is guided by on-screen pictures, meaning that very little training is needed to use it. Best of all, it’s cheap — an estimated $US34 per dongle, rather than the tens of thousands conventional equipment costs. [Columbia Engineering]