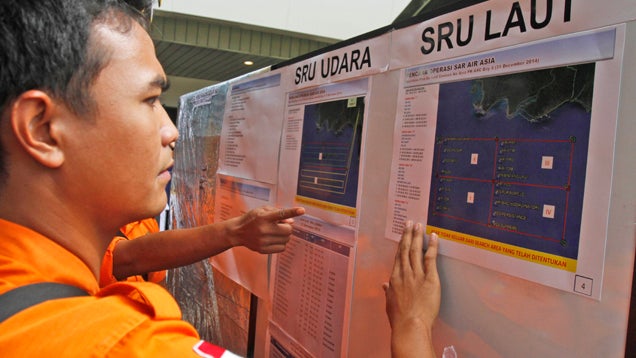 According to a report from Indonesian meteorological experts, the most likely cause of the tragic crash of AirAsia flight QZ8501 was not turbulence (as was previously believed), but actual chunks of ice inside the Airbus A320’s engine.

According to the report — the Indonesian government’s first since the crash, while they can’t point to this as the definitive cause, it is the most likely. As The Wall Street Journal explains:

Many air-safety experts, including former U.S. National Transportation Safety Board Vice Chairman Robert Francis, have pointed to possible unreliable airspeed sensors stemming from ice accumulation — or other flight-control difficulties — as problems most likely to have touched off a chain of events ending with the plane disappearing from radar screens at an altitude of more than 30,000 feet.

When thunderstorms occur at these high altitude, freezing bits of rain can get sucked into an engine, melt, and then freeze once again on the actual surface of the engine. Once the pieces accumulate enough ice, they can either “break into chunks that damage turbine blades, or melt and douse the ignition system.”

While ice-related engine damage alone supposedly haven’t fully brought down large jetliners in the past three decades, The Wall Street Journal does cite that fact that, in the past 10 years, there have been over a dozen incidents of engine shutdowns due to ice in large jets. Though these previous incidents didn’t prove fatal.

So why now? Airbus A320’s have had issues with malfunctioning airspeed indicators in the past, particularly in heavy rain. Still, that doesn’t necessarily mean anything conclusive here — we have yet to find out for sure whether Flight QZ8501 had the latest version of the sensor system.

What’s more, this is just the most likely conclusion based on weather reports. Until the plane’s black box is found — which rescuers are still searching for — nothing can truly be definitive. [The Wall Street Journal]