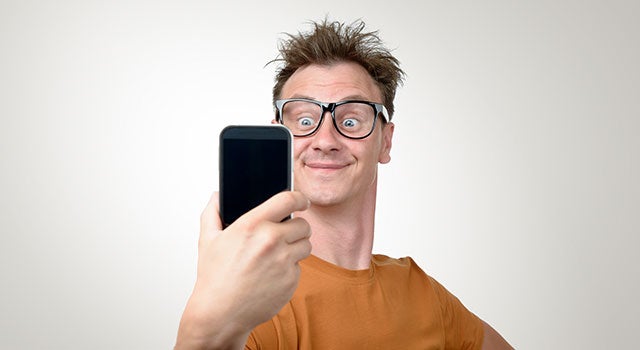 A study surveying the social media habits of 800 men confirmed with science what we've always known in our hearts — if you constantly take a bunch of selfies and post them online, you might have some mild psychological issues.

A research project, conducted at the Ohio State University, straddles the line between "no duh" and "well, that's disturbing" with its findings. The lead author, Jesse Fox, says that the study proved that self-taking dudes, who also spent time editing their front-facing snapshots, scored high for narcissism. Ok, not particularly surprising. However, guys who posted lots of selfies, but didn't really spend time editing them, showed signs of above average psychopathy.

But it's not like if you take photos of yourself you're immediately a crazy ax murderer. These levels of narcissism, self-objectification, and psychopathy were within average means and not diagnosed disorders, says Fox. In fact, a little bit of psychopathy isn't necessarily a bad thing for your Tinder profile.

This lack of filtering and impulsivity in SNS [social networking sites] posting may benefit some psychopathic men, however. One study found that male users who had SNS posts that alluded to excessive drinking and promiscuous behaviour were perceived as more attractive than male users with posts identifying them as ''the life of the party'' (Walther, Van Der Heide, Kim, Westerman, & Tong, 2008). Thus, when psychopathic men appear reckless or impulsive on SNSs, it may actually help attract mates.

+1 for our selfie-taking psychos!

Only within the last few decades have many of us needed to construct some digital representation of ourselves online. But Fox says it's not just the avatars we create that define us, but also how we create them. [Ohio State University via PetaPixel]