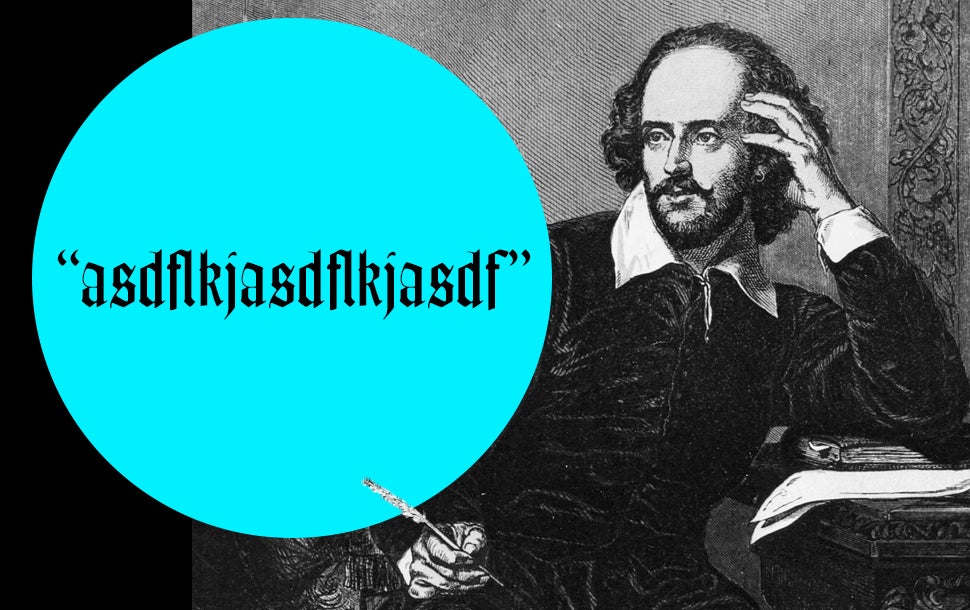 There exists a certain paranoia that the web will somehow destroy the English language as we all start communicating solely in LOLs and smileys. But seen another way, the linguistic tricks we’ve enlisted to portray attitude and action, tone and meaning through text online are just the natural evolution of the written word — a way to adapt to the absence of facial cues and recreate the quirks of IRL conversation in the contextless vacuum of a chat window.


For people who live and work in the digital world the flowering of linguistic subtlety online is already obvious. As my girlfriend pointed out recently, “If you don’t say ‘byeeeee’ or ‘bye bye’ and just say ‘bye’ on chat, I know you’re upset.”

It’s true, I realised. There’s an advanced, intuitive etiquette to how we type to each other that might look sloppy, but is actually, even if subconsciously, carefully and deliberately constructed. Internet English is “more coherent than what you think,” American University professor and internet linguistics scholar Naomi Susan Baron told me. “You don’t want to look stupid.”

From the start, the grammar of the internet was user-generated. “There weren’t style books out there telling us what to do,” Baron says. “We had a belief structure about how the medium worked. We were supposed to use abbreviations and acronyms, punctuation or the lack thereof.”

Language is shaped by the medium it has to move through, and today “the internet is no longer this special place you go to,” Baron points out, “It’s where we live our lives, for better or worse.” As the technology matures, so does the online language we use to express ourselves. “We have different kinds of literacy now,” Gregory Crane, a Tufts University professor using technology to break down classical language, tells me. “I don’t for a second believe they’re worse.”The knee-jerk fear that webspeak is killing the written word is par for the course. Throughout history, technology has been seen as the enemy of sincerity, especially when it changes our language. “In the 15th century, the arrival of printing was widely perceived by the Church as an invention of Satan,” David Crystal, author of Language and the Internet recounts. Plato argued that writing itself “will produce forgetfulness [for users] because they will not practice their memory.”

But interpersonal communication prevailed despite technology, and doubtless will continue to do so. Text remains the dominant language of the web. It’s the medium through which our online emotions flow, whether by emoji or ASCII, asterisks or all-caps. Just so we’re all sure we can understand each other, here’s a short dictionary of contemporary internet English.

— Capital letters are OBVIOUSLY for emphasis. Enabled by the caps-lock key, they first may have evolved as a mistake. “In early generations of internet language, people who don’t use capitalizations or punctuation are seen as people who can’t type,” says Gretchen McCulloch, a linguist who runs Slate’s language blog. Now that everyone knows how to type, the capitals are often used ironically, or even meta-ironically, both sincere and commenting on its possible insincere jokiness, DON’T YOU GET IT JEEZ MUM. See also: aLtErNaTiNg CaPs

— What are these even? Originally, the tilde performed highly &abstract; functions in code, mirroring values or destroying classifications. Now it… is still hard to explain. “A good definition of the use of bracketing tildes might go no further than adds juju,” Joe Bernstein writes in an essay on the symbol at BuzzFeed. They “signify a tone that is somewhere between sarcasm and a sort of mild and self-deprecatory embarrassment over the usage of a word or phrase.” ~Juju.~

— Hey. Heyy. Heyyyy. These three versions of one word all have significantly different valences, as a popular infographic meme shows. “Hey”= I am annoyed at you or waiting for a response. “Heyy”=How’s it going? “Heyyyy”= What are you doing later? “Heyyyyyy” = What are you doing right now? Letter repetition more generally softens and intensifies words online. Supppp is so much nicer than just sup. Reallllly good is way better than really good.

— Like a full-stop period, receiving a “…” in chat lets you know you’re in trouble. It expresses inchoate scepticism, shock, or surprise — the equivalent of a raised eyebrow. Either the conversation is brought to a halt, or you, the chatter rather than the chattee, are stalling on giving an answer to a question like, “Do you still love me?”

— I first remember seeing these in anime fan communities, but they bring a useful physical dimension into the virtual space of internet communication. The actions within the asterisks compliment the meaning of the text, even if the objects referenced don’t actually exist. Use sparingly. *Closes tab*

— In Gchat, I sometimes end up splitting phrases

simply because I can’t be bothered to finish an entire coherent thought before hitting enter. Thus, my chats and texts often look like e.e. cummings poems, and when read in retrospect, hold a kind of mystical formal quality. This tactic is also useful when coming to sudden realisations online in real time.

— We love to use shortcuts like acronyms and abbreviations, and they’re multiplying at a rapid clip. We just have to get all of our feelings out there rn! As we use them more and more, the shortcuts start to hold a meaning of their own, beyond the original word they’re abbrev-ing. Acronyms like tbh, smdh, wtf, or lol shift the tone of entire statements rather than taking on their literal or pragmatic meaning.

In linguistics, these are called “discourse particles.” “English doesn’t have terribly robust discourse particles,” McCulloch says. “But ones derived from whole phrase have very strong meanings.” So, well, right, and ok are some examples of English discourse particles that we use to cast a certain spin on a sentence, though their meanings are often vague. Online, we commonly use the more specific acronyms above — “tbh I’m not that into him,” “lol what are you talking about?” “smdh that’s so dumb” — to deal with the deficiencies of our IRL language.

— A more recent trend in internet English, writing a word with spaces in between the letters destabilizes its meaning, as if the term’s significance is vast and incomprehensible even though it seems mundane. The internet is all about c o n t e n t. It’s just l i f e, you know? Or conversely, if a word is too cliche to say with any sincerity: the internet has d i s r u p t e d the English language. “You’re saying it kind of stoned,” says McCulloch.

— The keyboard smash, as it’s often called, is an expression of the deep anguish, confusion, anger, resentment, and inexpressible angst of life as a human being. It’s often deployed as a way to get beyond the symbolic nature of textual language: aldsjkfhaslkdjfa represents nothing; it is pure action, captured in letters. It is a fast car hitting a wall.

The most surprising thing about internet English today may be just how much it has come to resemble the rest of speech — with multiple dialects, moods, and modalities. Far from destroying our language, the IRL/online distinction is hardly worth making. “I don’t think the term netspeak is useful, actually,” Crystal told me. “I never use it these days.” Yeppp. Def.