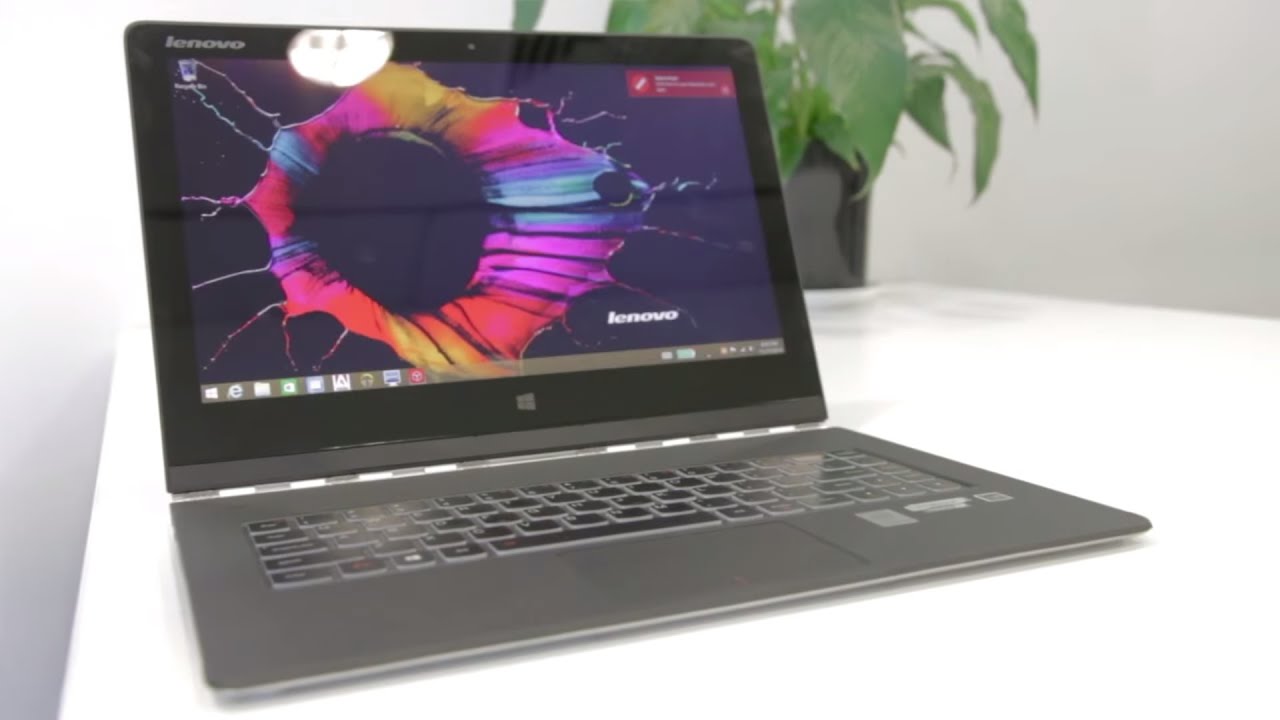 Laptops just made a quantum leap. Intel’s new Broadwell chips make it possible for notebook makers to create incredibly thin devices with fanless designs, and these notebooks are finally starting to hit the market. Lenovo’s new Yoga 3 Pro runs brand new top of the line hardware, and has an amazing hinge that lets it flip from laptop into tablet mode, or anything in between, at a moment’s notice.

The Lenovo Yoga 3 Pro, starting at $2099 and extending to a $2299 for a larger 512GB SSD variant, is a super thin laptop. Its 13.3-inch screen and bezel, along with its 60 per cent chiclet keyboard, push the Yoga’s overall dimensions to 330x228mm, and when closed its maximum thickness is a MacBook Air-beating 12.8mm (the comparatively tubby 13-inch Air is 17mm thick). Nearly half of this comes from the screen, which has to be slightly bulkier to accommodate a touchscreen array, so when you open the Yoga 3 Pro prepare to be impressed by just how thin it is.

The Yoga 3 Pro doesn’t disappoint when it comes to its external connectivity, although it does make a couple of compromises due to its size. You still get a full-size SD card reader, two USB 3.0 ports and a multipurpose combined headphone/microphone 3.5mm jack. Power, volume and screen rotation buttons are grouped on the Yoga’s right side (in laptop mode). Those compromises are that the Yoga uses a microHDMI connector for A/V output — you’ll have to carry an adapter with for presentations — and that the third USB port is actually also the laptop’s DC power jack. There’s also no mobile broadband connectivity built in. This barely-there size and weight comes courtesy of Intel’s latest fanless Broadwell mobile processors, which are very light on power usage while still offering everyday Ultrabook-esque computing performance. The Yoga 3 Pro runs a Core M 5Y70 processor, and these are no low-grade Atom chips; they’re proper CPUs, with grunt roughly comparable to an Intel Core i5 like the one seen in the similarly convertible Microsoft Surface Pro 3.

Lenovo offers the Yoga 3 Pro in a few different finishes, and two price points for either 256GB or 512GB SSD storage variants. I road-tested the basic and business-friendly Platinum Silver, while a Clementine Orange alternative is available at the same $2099 price point. If you want Champagne Gold, you’ll have to spring for the $2299 512GB SD, which is also possible to buy in the standard silver. Lenovo’s ‘watchband’ hinge has to be the biggest talking point of the Yoga 3 Pro. With a mix of the same brushed metal as the laptop’s lid and machined rotating links — like a fancy metal watchband — the hinge rotates nearly a full 360 degrees, transforming the Yoga 3 Pro from regular ol’ laptop to super-skinny tablet in one consistent motion, allowing the not-so-useful ‘tent’ and ‘stand’ permutations along the way. It’s that first 180 degrees of motion — from closed laptop to entirely flat display — that are by far the most useful, but tablet mode might come in handy if you want to watch a movie or TV show while commuting. The hinge is an engineering marvel, and while I was a bit worried about its durability it feels secure and stable during everyday use.

If the hinge is its largest talking point, the hardware hidden away inside the Yoga 3 Pro is an extremely close second; it’s the first convertible tablet-laptop I’ve seen using the brand new Intel Core M processor and associated chipset. The CPU inside the Yoga is a Core M 5Y70, running at a maximum frequency of 2.6GHz for surprisingly quick performance, while being designed with a utterly frugal 4.5 Watt TDP. It runs perfectly silently, and only gets acceptably warm during heavy use, but with results of 49,875 in 3DMark 1.2 Unlimited it’s no slouch — beating out the 47,564 of the Microsoft Surface Pro 3. This chip has roughly equivalent performance to a last-gen Ultrabook’s Core i5 processor, but at less than one third of the power consumption and heat output; these are incredible results when we’re talking about power efficiency and general computing performance. For everyday productivity — Web browsing, video watching, photo editing — the Yoga 3 Pro is perfectly suited.

The internal hardware of the Yoga 3 Pro really is top-notch. The internal 802.11ac Wi-Fi is the fastest I’ve tested in any non-Killer Wi-Fi laptop; I clocked 52MBps transfer rates from a Linksys WRT-1900AC router, which translates to excellent performance for everyday network file transfers and Web browsing. Having the power jack be a multipurpose USB 2.0 point comes in handy more often than you’d think. Oh, and the screen. The 13.3-inch, 3200x1800pixel, multi-touch, glossy, super-bright screen. It’s surrounded by a bezel that is thicker than I would have liked, but that’s necessary to allow you to hold the Yoga 3 Pro in tablet mode; apart from that small inconvenience it’s a nearly flawless display. Viewing angles are excellent, colour saturation and accuracy is great out of the box sans calibration, and over the ten steps from minimum to maximum brightness you get a hell of a lot of versatility. (This high maximum brightness and high resolution does take a big toll on battery life, but having the potential when you need it is the important part.) Lenovo has always had a tiny skew towards business users, so it’s slightly disappointing to not see a 3G/4G mobile broadband modem integrated into the chassis of the Yoga 3 Pro. I’m the kind of person that always carries around a Wi-Fi hotspot, and I’d happily do away with that if I could use that SIM directly in the Yoga instead. Maybe in a future model, Lenovo? (Hint, hint.) Similarly, I found SD cards to fall out easily from the side-mounted SDXC slot. Otherwise, build quality, fit and finish are excellent.

Windows laptops’ trackpads are rarely excellent, and are often the weakest point in any thin and light design. The same is true of Lenovo’s Synaptics-derived ClickPad on the Yoga 3 Pro — it’s functional, but doesn’t have the same brilliance and effortless ease of use that is the hallmark of any Mac or MacBook touchpad. At roughly 90x60mm it’s perfectly sized for everyday use, and has a tactile click across the entirety of its surface area, but there are a few niggles to its usability — swipe and you won’t be able to tap the trackpad straight away, for example. It’s OK, but there are better trackpads out there. Being so thin and so light, this isn’t a laptop that you can extract an entire day’s full-power battery life from. If you lower screen brightness to its minimum level, it’s possible, but in more realistic settings you’re going to be able to extract moderate battery performance. The Yoga 3 Pro clocked 6 hours and 42 minutes in our battery Torture Test, where we loop a 720p video at half screen brightess with Wi-Fi enabled, but the Torture Test Extreme cut that in half to a not-so-impressive 3 hours and 15 minutes.

When Ultra Power Saving Mode is enabled, you really do notice the hit to the Yoga 3 Pro’s performance as the system tries its utmost to eke the longest usage possible. Type a sentence fast and you’ll notice the cursor lags very slightly behind; this is the Core M processor saving clock cycles and making the most of its minimum power state. It’s very useful, but when it automatically enables at the 20 per cent you won’t be doing any serious work unless you disable it.

The $2099 Yoga 3 Pro is, when you pick it up and type on it and use it, an amazing piece of computing hardware. The new Core M CPU is surprisingly powerful given its utterly miniscule power output, and the integrated GPU is no slouch compared to previous Intel offerings. All of this, in a design that doesn’t get hot and burn your lap, is a pretty attractive package.

Battery life is pretty damn impressive as well in its context, when you consider that there’s barely more volume than a Surface Pro to hide away a similarly sized nearly-45Wh cell. Where the Yoga 3 Pro makes its mark is with how incredibly efficient it is with that power in its processing and computing — this is a laptop where battery life is almost entirely determined by the brightness of the screen. If you’re willing to work with a dim display, you can eke Macbook Air-beating figures out of the Yoga’s equally svelte body.

Even the keyboard is excellent, which is a godsend given the thinness of the notebook and given Lenovo’s storied history in this area. If you don’t mind chiclet keys, the typing experience is excellent. (I typed this entire review on the Yoga 3 Pro, and didn’t stumble nearly as much as usual as on other thin and light laptops.) The trackpad is less brilliant, but a little bit of software tweaking fixes most of its issues quickly.

At the start of this year, I bought the LG Ultra PC — a MacBook Air for the everyday Windows user — because of its ultra-slim chassis and the simplicity of its design. Ten months on, I have a new object to focus my affection upon, and that’s the Yoga 3 Pro. There are a few small things that I’d change, but they’re minor at best and don’t stop me from giving Lenovo’s newest top of the line laptop my most wholehearted recommendation. It’s expensive, but you get what you pay for.