Aerial photographs of Disney's theme parks are rare these days. That's not because they're boring or dumb. They're impossible to take, because Disneyland and Walt Disney World are prohibited air space. And it's not just because of terrorism, either.

Back in 2003, Disney successfully talked Congress into bending its own rules and declaring no-fly zones over its theme parks. It seemed like a sensible idea at the time. Congress was rushing through a massive spending bill ahead of the war in Iraq, and Disney snuck in a no-fly provision for its theme parks, something the company had been trying to do for years. The restricted air space now has a three-mile radius around both Disneyland in Anaheim and Walt Disney World in Orlando.

But why? Why would Disney want a no-fly zone over its theme parks? Turns out, it has less to do with security than it does to do with annoying aerial advertisements. 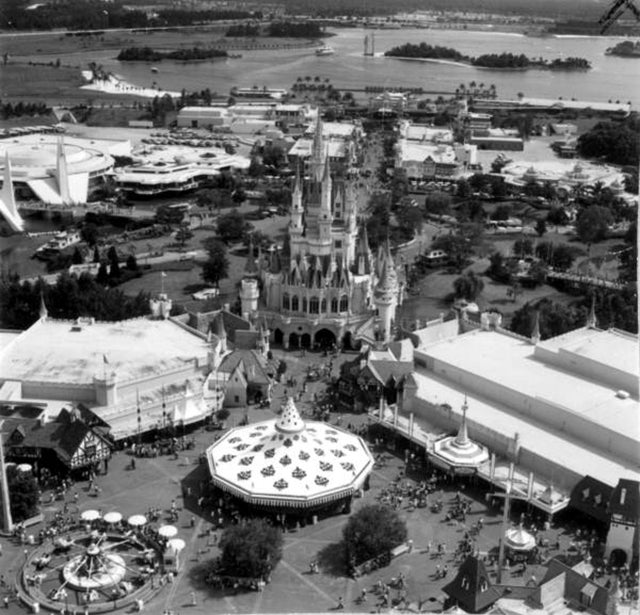 A rare aerial shot of Walt Disney World, when it opened in 1971.

Disney's attempts to establish a no-fly zone over Disneyland and Walt Disney World are documented. The Sentinel even got Disney on the record, admitting that it wasn't just the terrorist threat — if there ever was a terrorist threat. After all, despite drawing similarly sized crowds, other theme parks like Six Flags didn't get no fly zones. But a Disney spokesperson told the paper:

"The sole and exclusive motivation for seeking these restrictions is for the safety and enjoyment of our guests," said Disney spokeswoman Leslie Goodman, explaining that "enjoyment" meant everything from keeping out "banner ads from trial lawyers" to pilots "buzzing the parks."

Banner ads sound a lot less threatening than biological weapons. The sad side of Disney's political manoeuvring is that over 100 aerial advertising business that used to fly over the parks went out of business after the no-fly zone was implemented. And according to a recent Los Angeles Times investigation, it's unlikely that the restrictions will be lifted any time soon.

So enjoy your next trip to Disneyland. And thank George W. Bush for starting a loosely justified war that gave a big, rich corporation the opportunity to bend the law in its favour with well-connected lobbyists. Disney surely wasn't the only company that profited from that weird moment in American history.