Why No One Used Camouflage Until WWI 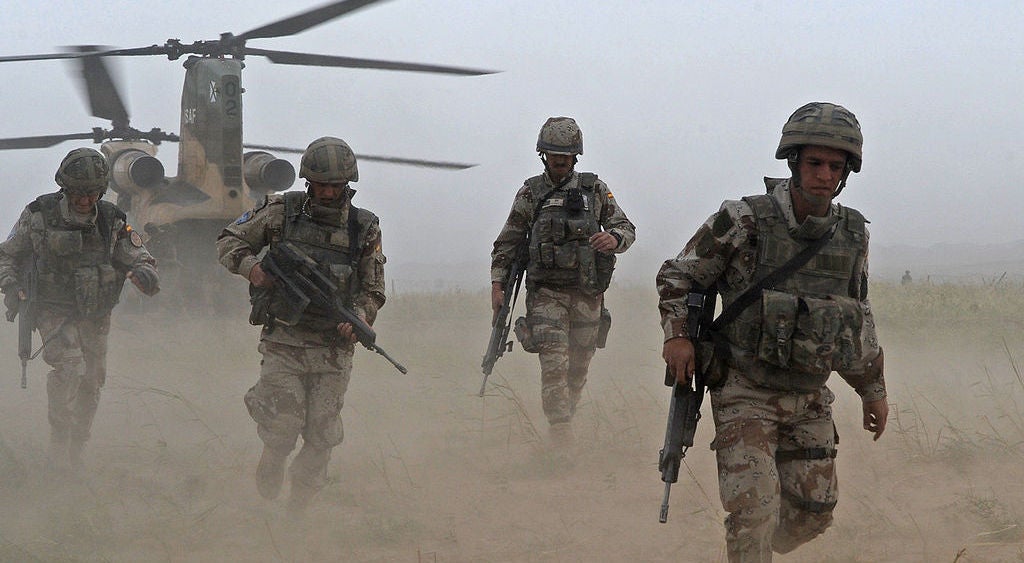 The general idea behind visual camouflage, which is to make distinctive, recognisable shapes difficult to pick out against a background, was nothing new in 1914. The point of camouflage isn’t necessarily to make oneself totally invisible, which isn’t practical for a large army.


Instead, a substantial advantage can be conferred simply by reducing the time that an adversary has to react once he has discovered you. As combat veterans will attest, the time between acquiring a target and being able to engage him could be very quick. Even the split-second it takes to focus your eyes on a target can mean the difference between successfully engaging the enemy, and missing him or getting shot first.

During colonial campaigns in the late 19th c., Britain adopted the khaki worn by its Indian regiments as the standard across the entire British Army because the brownish-yellow colour blended more closely with local terrains where its soldiers found themselves in combat. (Khaki itself is a Hindi word) France and America, which fought plenty of their own colonial campaigns, also adopted versions of khaki for some units around the same time (although metropolitan French regiments still marched to battle in 1914 with the famous pantalon rouge, which cost them dearly against the feldgrau-clad Germans).

Before that, in the 18th-early 19th c., military units from British rifle units to American Revolution-era patriot militias to Native American warriors had all used various techniques to camouflage themselves from enemies in the field.

But before the First World War, camouflage mostly consisted of wearing drab colours difficult clearly to see at a distance. The distinctive blotches of colour that are so familiar to us today didn’t come about before then. So the question contains a very interesting sub-question: Why did camouflage as we know it todaysuddenly start to develop very quickly around World War I? I think you’d need to mention something very relevant in any discussion about World War I weapons technology: OPTICS.

In 1890, US Navy Rear Admiral Bradley Fiske was granted a patent for an optical device that was to have enormous implications for both naval and land-based warfare in the next several decades: the range-finder. 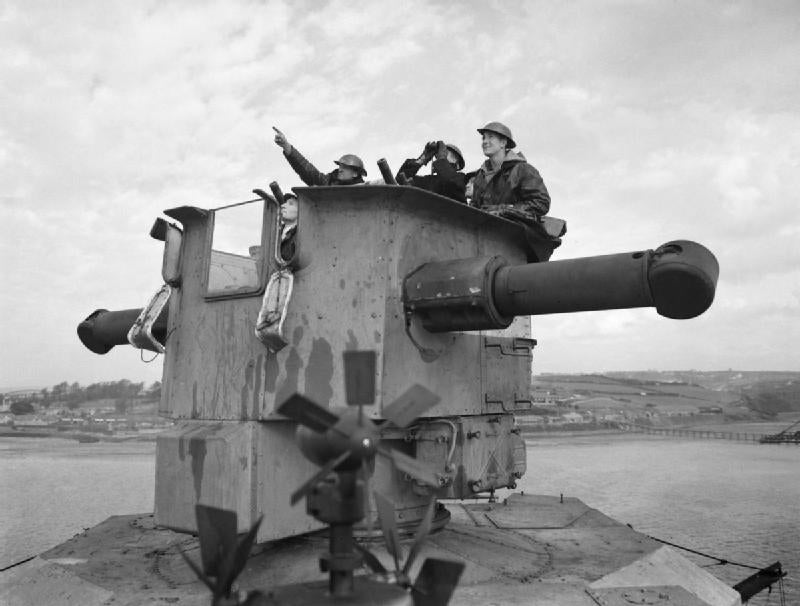 Prior to the advent of the coincidence range-finder, deciding how high or low to elevate your guns in order to hit a distant target usually meant having to guess how far away it was. But thanks to Fiske’s range-finder device, you could now determine precisely how far away an enemy ship was before wasting your first salvo. The principles behind it are probably simple for anyone who remembers high school physics, but since I don’t, here’s an idiot’s description of how the optical range-finder works:

The range finder is basically a pair of binoculars, with the eyepieces normal distance apart, but the objective lenses spaced very far apart (on some battleships, several yards apart). Such that when you look through the device at, say, a Boche dreadnought, you see an image that looks like this: 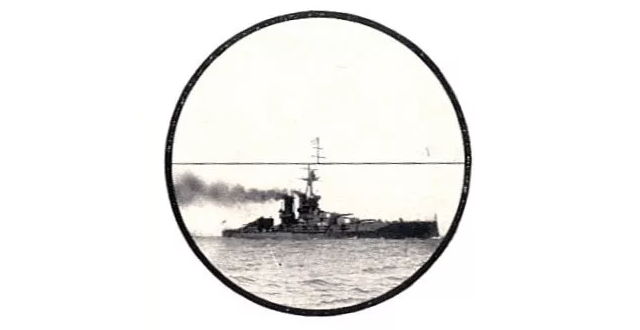 Note that the very top of the mast is off by just a tad — the images from the two objective lenses do not quite match up. The range-finder operator then adjusts the knobs on the range-finder until the mast lines up exactly. See sub-figure B, below.

By some very basic trigonometric principles [which, like physics, I’ve completely forgotten] you can then calculate the distance to the target to a very high degree of precision. Note that in order to use the device properly, the operator needs to have a good idea of what, exactly, he is looking at so he can match up the images properly — this part will matter later on in the answer. Needless to say, once the Americans came up with this, every major power at the turn of the 20th c. invested in it even further, and all the major powers used range-finders to guide their naval guns and field artillery.

Coincidentally, in the early 20th century, there was also an artistic revolution going on in France: a new movement called Cubism. 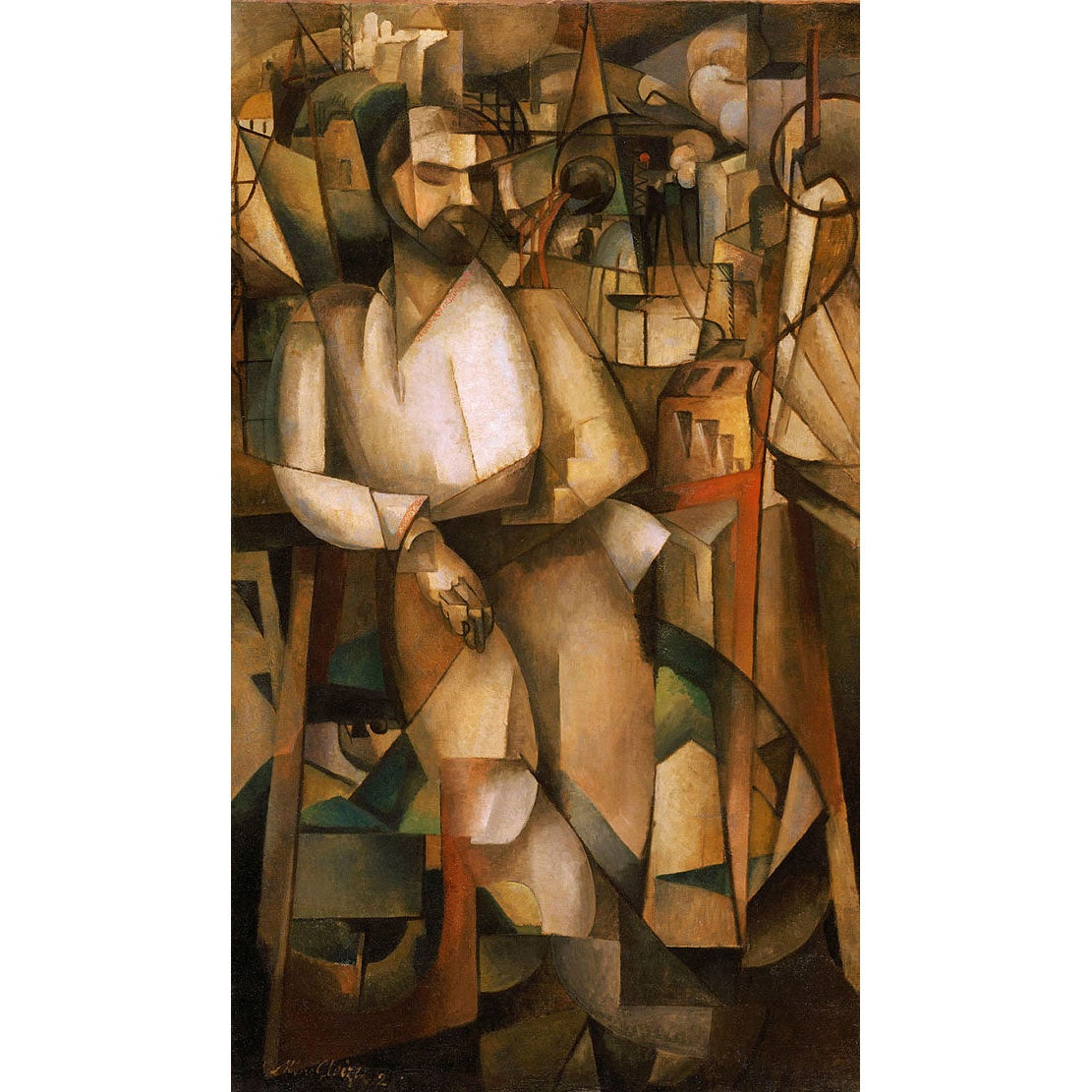 The idea behind cubism in painting is to take a shape that exists in the world as we perceive it naturally, break it up into different constituent pieces, and then reconstruct it in a way that appears almost alien to the human eye, by painting those pieces from several different points of view simultaneously.

Cubist painters sought to paint the world as it really was, not as we mere humans see it. The Cubists also developed new modes of visual fragmentation, rendering form through spatially confusing planes. They broke these planes up further with lines that fragment form rather than delineate the contours of shapes.Ironically, the Parisian artists’ quest for intellectual realism was quickly seen by the French military to have high potential in military deception.

In 1914, France was on the brink of yet another crushing defeat by the Germans, who enjoyed many advantages including marvelously accurate modern artillery. The French, art-loving, clever folks that they are, called in the Cubist painters,bien sur! One cubist, Lucien-Victor Guirand de Scevola, was put in charge of a whole new department of the French Army devoted to camouflaging buildings, planes, cannons, trucks and installations. He described his task very succinctly:

In order to deform totally the aspect of an object, I had to employ the means that cubists use to represent it.

This notion of using lines, plains and colour to break down shapes, rather than to define them, was a very important innovation of early 20th c. artists — simply put, it had never occurred to anyone before. If you aren’t sure what Scevola was talking about, look at this person playing an accordion: 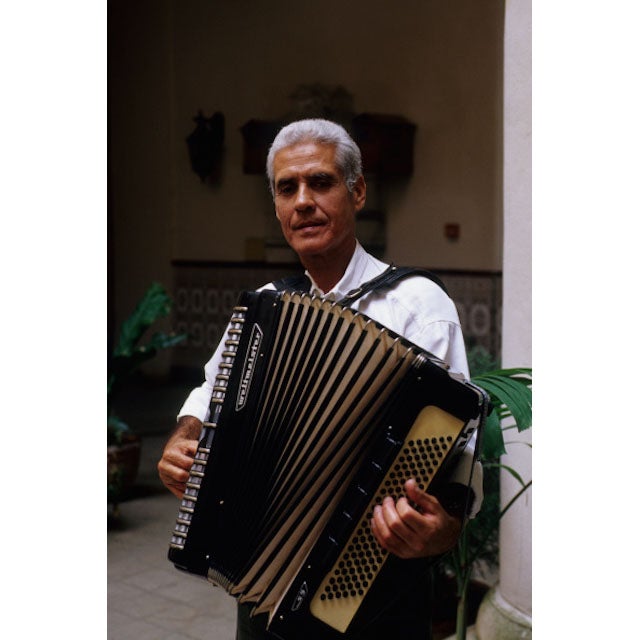 And then look at a painting of a person playing an accordion done by Picasso in 1911: 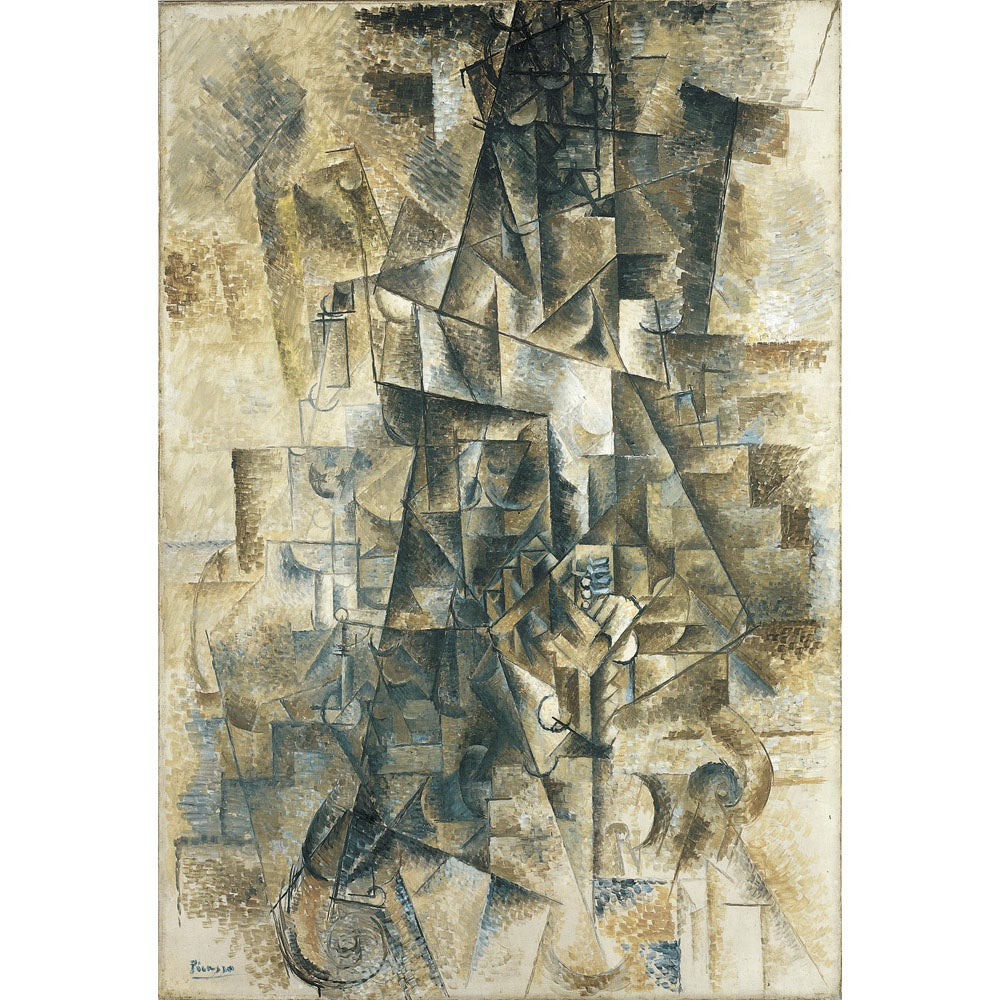 Obviously, the first image isn’t the person who modelled for Picasso in this painting, but the point is the French (and soon afterward the Germans and British) realised that some of the same aesthetic principles behind cubism could be put to use breaking up the otherwise easily distinguishable shapes of distant objects. Painting potential targets in ways designed to break down their form makes it difficult for adversaries to line those images up properly, particularly at longer distances, where atmospheric effects, battlefield smoke, surrounding terrain and other factors can make even an undisguised target difficult enough to fixate accurately.

In other words, the very first types of camouflage were intended so that you can never be quite sure just what you’re looking at, particularly when you view them through an optical range-finder. These principles were used at sea (a warship painted with “dazzle” camouflage): 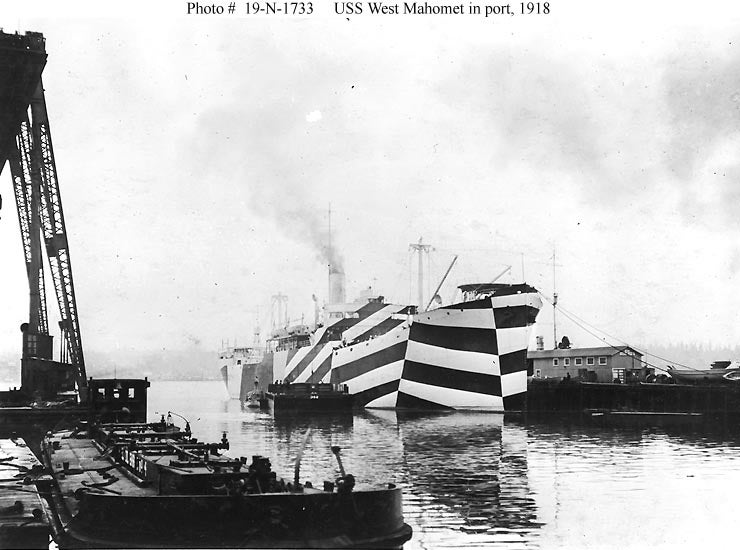 On land (a camouflaged ambulance): 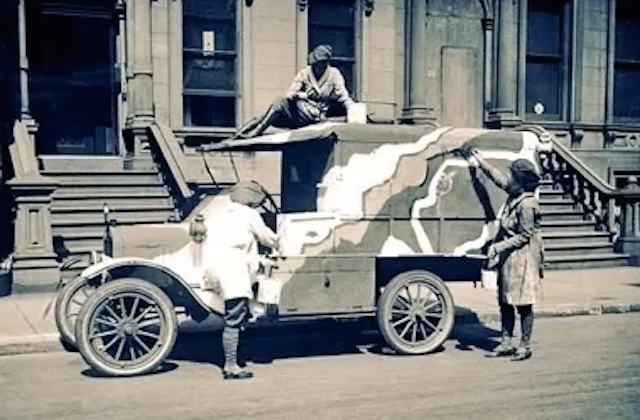 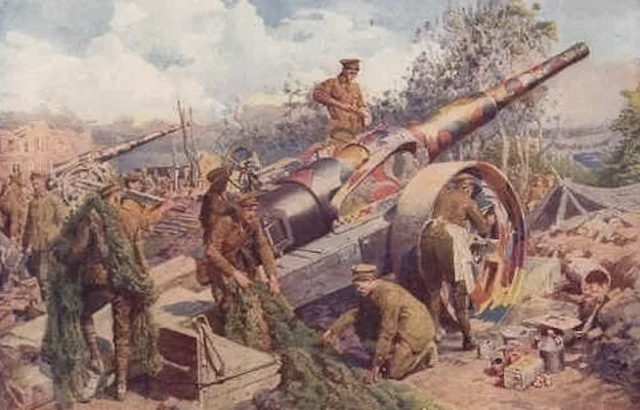 In the air (German fighter plane): 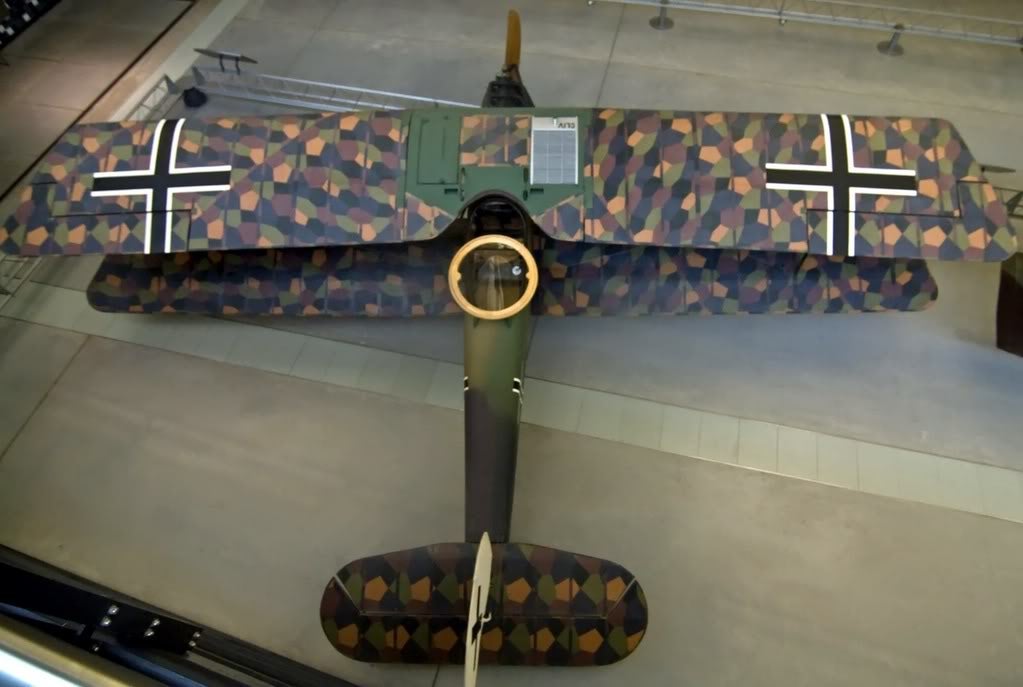 Even by individual infantrymen, as on this painted German war helmet: 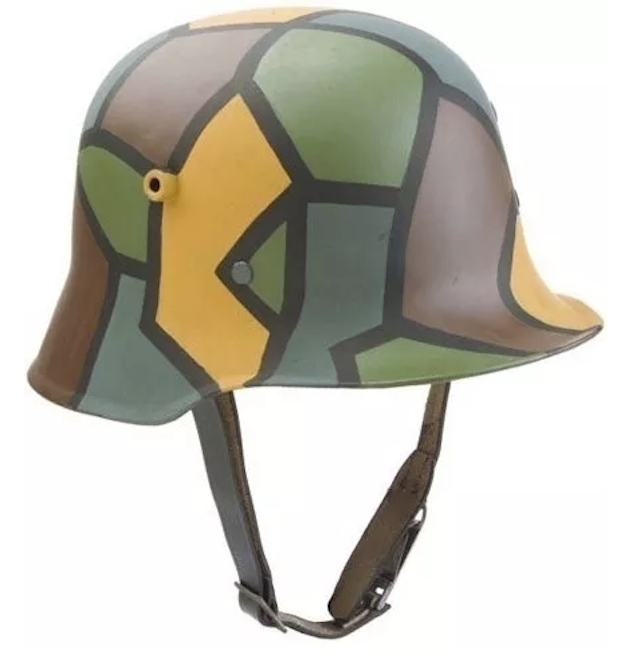 What made World War I different from previous conflicts was the reach of the weapons being used. In the American Civil War, American soldiers with slow-firing muzzle-loaded rifled muskets had a reach of a few hundred yards, and their even slower-firing artillery could only hit line-of-sight targets within about a mile. Just 50 years later, the standard military rifles, such as the German 1898 Mauser or the American M1903 Springfield, could send deadly aimed fire out to a mile if needed, and artillerymen didn’t need to be able to see what they were shooting at, as long as they had someone up front who could relay accurate range and bearing information.

It was with the aim of defeating these newer, longer-reaching types of weapon that camouflage first came into common usage. And to think that none of it would have been possible if not for a bunch of painters who had been denounced by the establishment art world as renegades!

Why No One Used Camouflage Until WWI originally appeared on Quora. You can follow Quora on Twitter,Facebook and Google+.