The Truck Of The Future Is Made By Mercedes Benz, And It Looks Like A Starship 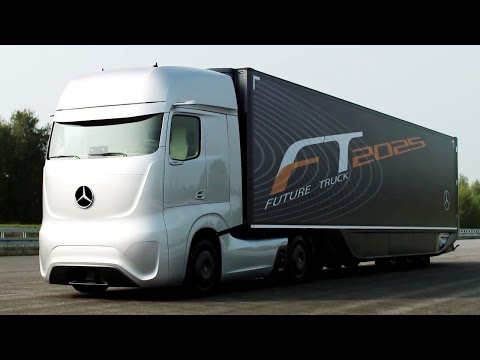 The new 2025 Future Truck is a super-aerodynamic model that looks like a Optimus Prime doing his best minimalist impression. Conventional headlights are replaced with insanely-awesome looking LEDs that shine through the silver shell, and the wing mirrors are replaced with cameras that beam a feed of what’s going on around the truck into the Star Trek Enterprise-like cabin.

Mercedes Benz has engineered the cabin around an autopilot-style drive system that turns a potentially deadly truck into an almost autonomous and precise driving machine. It operates on all the principles that an driverless car does, and even pulls the driver back from the wheel automatically so they are “free to do other tasks”.

When the autopilot disengages due to a change in conditions, the seat is moved back so the driver can take control.

The dials and control panels have been replaced by full-colour touchscreens in the Future Truck, and a tablet mount contains a second screen device where truck drivers can do anything from work to be entertained while the computer racks up the miles.

Right now, the truck is actually road-legal in states that approve of autonomous vehicles in the US like California and Nevada, but Mercedes says it will take other governments getting on board to get this on the road all over the world.

Would you want a driverless truck? What would you put in the truck of the future? Tell us in the comments!