7 Experimental Interfaces That Show The Future Of UI Design 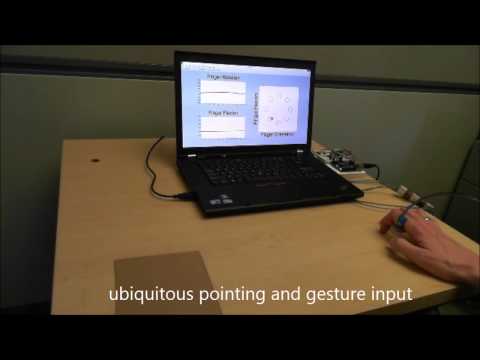 Trade shows might be sexier, but there’s no beating academic conferences for weird new tech. Today, at the 27th Software and Technology Symposium in Honolulu, dozens of researchers presented a glimpse into the future of UI design — here are six of the most interesting. Meanwhile, you can find me at “Beach Activities”.

LightRing by Wolf Kienzle and Ken Hinckley from Microsoft Research uses infrared to detect finger motion and a gyroscope to determine orientation, and it can turn any surface into an interface. You can tap, draw, flick and drag on a book, your knee, or the wall — only with one finger for now, but still in a really attractive and natural looking way.

RoomAlive, which Gizmodo posted yesterday, is Microsoft Research’s follow-up to IllumiRoom, which was presented at CES 2012. Both are steps towards a this-is-our-house-now Kinect future. The new system goes beyond projection mapping around a TV by adding input-output pixels on top of everything in the room. RoomAlive uses multiple depth cameras and spatially mapped projectors to overlay an interactive screen from which there can be no escape. Are Kinects with no off button far behind?

A team at Carnegie Mellon University took a different approach to the problem of off-surface interactions by looking for ways of expanding the interactive zone around a smartwatch without making it physically bigger. Their Skin Buttons project (might consider a name that sounds less permanent) uses miniature projectors to display interactive icons on the skin around the watch face. The projector parts cost less than $US2 and can even increase battery life by shifting workload from the main display.

The FlexSense from Austria’s Media Interaction Lab is just a transparent sheet of plastic, but its embedded piezoelectric sensors detect exactly what shape it’s in. This means it allows for all kinds of intuitive, paper-like interactions — like flipping up a corner to reveal something underneath, toggling layers in maps or drawings. Augmented reality origami: yes.

Tracs is a dual-sided display with adjustable transparency designed for “fast and efficient collaboration of spatially close or facing co-workers.” If you’re yearning to stare deeply into your desk mate’s tired eyes, you’re in luck with this sandwich of polarising filters and backlights between two LCDs.

Teegi is a doll that shows you what your brain is doing. Short for Tangible ElectroEncephaloGraphy (EEG) Interface, this weird little French fellow is an educational tool that lets you see brain activity in a natural way, without having to adjust for the orientation of a screen.

HaptoMime, from the University of Tokyo, might be my favourite project because it’s the one closest to magic. The device uses ultrasound to create tactile feedback in midair, so you feel like you’re touching a hovering image (produced by a hidden LCD and an angled transmissive mirror) when there’s nothing there at all. Hospitals? ATMS? This would be great for any kind of very public display. Or just to mess with kids.