Monster Machines: This Mobile Dialysis Machine Will Clean Your Blood On The Go 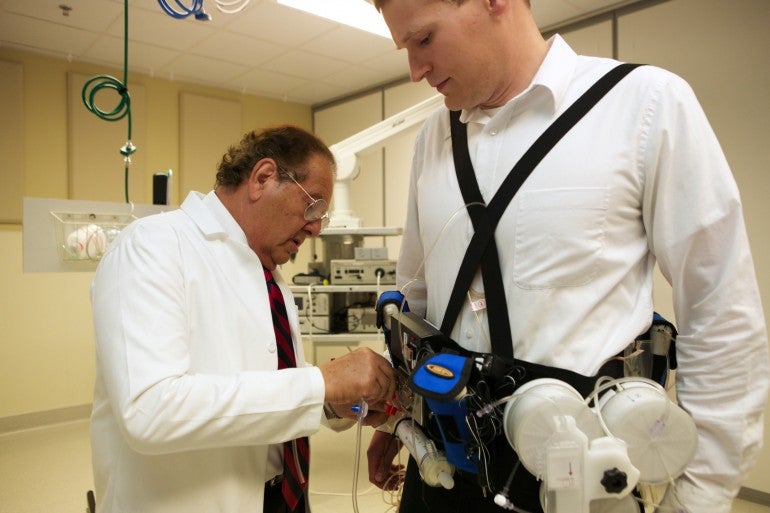 The days of hemodialysis patients spending hours upon hours sitting in a hospital lounge while waiting for their blood to be cleaned could soon be a thing of the past — assuming, of course, that the world's first wearable artificial kidney passes FDA muster later this year.

Dubbed the Wearable Artificial Kidney (the WAK), this device is the result of more than a decade of development by teams at Cedars-Sinai Medical Center, Los Angeles, and the David Geffen School of Medicine at UCLA, led by Victor Gura. It is, quite simply, a miniaturised dialysis machine small enough to wear on a toolbelt, simple enough to port in with a standard catheter, and light enough to wear all day. It works just like a conventional dialysis machine — dirty blood is sucked out of your body, pressed through a series of molecular filters to sieve out the waste, then pumped back in — and on the same schedule as a conventional dialysis machine — three four-hour sessions every week — except instead of weighing 90kg and resembling a filing cabinet, the WAK weighs 4.5kg and fits around your waist.

The system will be put to the test as part of the FDA's Innovation Pathway program — one designed to fast-track promising medical technologies — later this year in Seattle. This will be the WAK's third set of human trials (limited studies have been performed in the UK and Italy) and the first held in the US. Should it gain FDA approval, Gura's team plans to further streamline the unit's physical features as well as stretch the cleaning cycle out to 24 hours so it behaves like more like a real kidney. And, best of all, it gives you a decent argument for calling yourself a cyborg while you wear it. [UW News Beat via Gizmag]