This Custom Poop-Chute Dispenses Droppings For Lions To Play With

There's a lion in the San Francisco Zoo that absolutely adores rhino dung: loves smelling it; loves rolling in it. A team of Stanford students found this out during a design-build course, and you know what they did? Those undergrads developed a custom three-pronged poop-chute for the lion lair.

Fun. After beefing up their own knowledge with extensive research — scat play is apparently a common practice of predatory beasts — and a series of prototypes reviewed by zoo curators, the group developed the trio of pipes to dispense "pre-pelletized droppings" at established intervals. This would give the big cats a boost and something to engage with throughout the afternoon, which would in turn enhance the visitor experience — "Look! They're doing stuff! With doo-doo!" — and presumably make the keepers' jobs more enjoyable by having all-around happier charges. 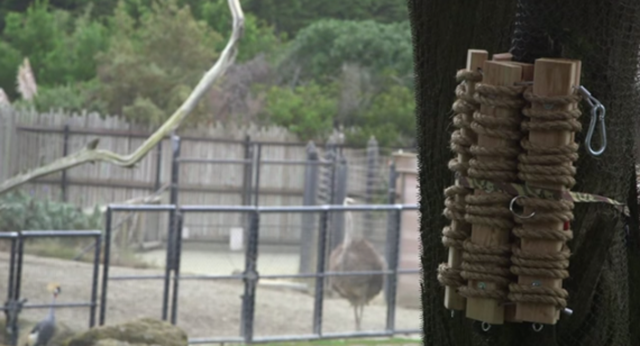 This is the backscratcher designed by Team Giraffe for Floyd, the resident long-necker. After installing it in the habitat, the group has been keeping regular tabs on Floyd's usage to make sure he's enjoying it and it's serving it's purpose.

The project was just one completed during the course that centered on developing new elements for the enclosures based on the day-to-day activities of the animals, their caretakers, and the people paying money to see these exotic creatures in a pseudo-natural habitat. Here's hoping the giraffes liked their specialised backscratchers as much as the lions and their number-twos.

Picture: The dung-dropper spreads the poop-pellets out in three different directions at pre-determined times throughout the day, in an effort to get the lions to engage with their environment.