This App Lets You Create Custom Shoes With Your Own Photos 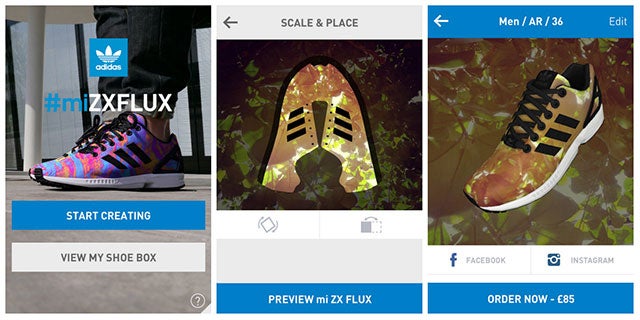 Last Friday, Adidas introduced a new app called #miZXFLUX. A novel little iOS and Android app that lets you create custom shoes from your own photography. Finally, I can give all my friends the perfect pair of kicks with my beautiful face all over them.

Despite its somewhat strange premise, the app is pretty genius and incredibly simple. First, users sign in and provide all the footwear details, including gender, shoe size, and where these puppies are being shipped. Then you're introduced to an Instagram-like photo editor, which overlays the shoe in front of the image so you can get the perfect shot. You can then rotate, zoom, and flip the image to that exact desired spot, then hit "preview."

Now, this is the cool part. The app instantly creates a 360-degree model of your shoes that you've just created. Once you continue, they're added to your "shoebox" where you can store all your sneaker creations. And of course, with an app that has a hashtag in its name, you can then share your shoes on Twitter and Facebook. This, arguably, is the best function of the app as it has spawned some...creative footwear.

One day with the #miZXFLUX app and I'm already DEFINITELY ordering these two. pic.twitter.com/A2EeGfKxsD

However, this is an app where you actually need to read the terms of service. To avoid egregious amounts of lawsuits, Adidas will cancel any order that shows corporate logos, famous persons (living or dead), include the image of anyone other than you (yes, my dream is still alive!), or just have any possible infringement material whatsoever. What's weird is that Adidas goes on to claim that you also can't make these images public via internet or social media. The photographic evidence above proves that's not going so well.

Right now the app's biggest flaw is its availability. You can only purchase these shoes in Germany, France, UK, Netherlands, Spain, Italy, Austria, Belgium, Ireland, Denmark, Sweden and Finland. But with many more countries, including the U.S. and Canada, listed in the app's opening country selection, it seems Adidas may add more markets along the way.

Until then, the app itself is actually pretty fun. Even if you don't have availability yet, nothing is stopping you from making that perfect sneaker now for when that time comes. [iOS and Android via Designboom]